No information
Note: This is the Reboot version of Max Tennyson, For his Prime Counterpart, See Here

Max Tennyson is the tritagonist from 2016 reboot series Ben 10.

He is voiced by David Kaye who is the original voice of Sesshomaru and Optimus Prime in the Transformers: Animated who also voices of Cannonbolt, Shocksquatch, Gravattack and Khyber in the Omniverse sequel, the voice of Duckworth in the DuckTales reboot.

Max has grey and white hair and has brown eyes. He wears a white shirt with a red Hawaiian shirt with orange clovers on top and has a brown cargo vest on top of it all. He wears blue jeans and brown shoes. He has a brown and gold watch on his right arm.

As seen in a flashback in The Chupaca-bro, as a child, he wore the same clothes his present counterpart. He had brown hair and was less chubby.

In Beach Heads, he wore a white t-shirt and red swimsuit.

In Introducing Kevin 11, he wore a black hat and a blue and yellow Hawaiian shirt with the number 10 behind it.

Max cares about his grandkids and is usually not too strict with them. He teaches them things a normal parent would teach. He is usually on Gwen's side when Ben and Gwen fight.

He is Ben and Gwen's paternal grandfather who is a retired member of an intergalactic organization called "the Plumbers".

Ben has spent his Summer Vacation traveling across the country with his enthusiastic and responsible cousin Gwen, and his Grandpa Max, in a slightly aged RV nicknamed the Rustbucket. Despite Ben having lots to learn, he homes his hero skills with Gwen and Max's help.

In order to determine the source of this issue and find what's causing the Watch to beep, Max calls in his old friend Phil.

The Tennysons continue to visit some of America's greatest tourist spots, as Ben continues to take his hero career to new heights.

Vilgax, having survived their previous battle with scars to prove it, the squid-faced conqueror seeks a method to escape Earth, while forming alliances with some of Ben's enemies such as Animo and Zombozo in order to harness the Omnitrix's power. Team Tennyson make it their mission to defeat Vilgax and stop his devious machinations from seeing light.

After a serious battle with the High Override, Ben's half-Upgrade, half-human hybrid, Glitch becomes merged with the Rustbuggy and is a part of the Tennyson family and joins them on their road trip. 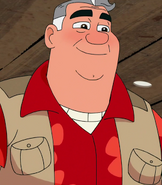