Getting what she wants.

Ruling over the planet Almerac and its citizens.

Convince or coerce Superman into joining her as both her betrothed and new king of Almerac (failed).
Find someone to mate with.
Defeat Brainiac.
Get revenge on Superman (formerly).
Lead her people to safety from Imperiex.
Destroy Imperiex by forming alliances
Save the universe from Brainiac 13s Warworld (succeeded).

Maxima is a fictional superhero from the DC Comics and its universe, mostly appearing in Superman titles. She is known for searching for mates among Earth's superpowered male population; as a result, Superman becomes her obsession. Morally ambiguous, she formerly serves as an adversary for Superman and currently is a superheroine working as a member of the Justice League.

She was created by writer Roger Stern and artist George Pérez, and first appeared in Action Comics # 645 in September of 1989.

Maxima once ruled a vast intergalactic empire centered on her homeworld of Almerac. For thousands of years, her ancestors had intermarried with races from other worlds, breeding for strength, for speed, and for power. Representing the apex of Almeracianeugenics, Maxima resolved to continue in the same tradition of her people. To that end, she became obsessed with expanding her galactic reach and, most importantly, securing a suitable mate to father an heir to her glorious realm. When Sazu, her personal handmaiden, intercepted a subspace transmission detailing the astonishing feats of Superman in the gladiatorial games of Mongul's Warworld, Maxima was sure she had found her man. Without further delay, she set out to make the Man of Steel her husband. But despite Maxima's beauty and power, Superman consistently eluded her for various reasons. As a result, Maxima's admiration turned to rage, and she became his enemy.

In The New 52, a younger, revamped Maxima is briefly introduced in Supergirl issue #36 as a distinguished member of the Crucible Academy, an intergalactic organization that trains some planets' finest specimens to become their planets' protectors.

She spends the next few issues bonding with Kara before eventually revealing in issue #40 that she is emotionally and sexually attracted to Kara; Maxima's homosexuality is the reason she left her homeworld and the demands of her culture to find a heterosexual partner to produce children with.

Resolving the Conflict with Superman

Initially, Maxima sent her royal advisor, Sazu, along with a near perfect duplicate of herself to seduce Superman on his adopted home planet of Earth. Despite Sazu's attempts to extinguish the warrior queen's growing fascination with Krypton's last son, Maxima soon traveled to Earth herself. After first engaging Superman in battle to test his mettle, the Almeracian aristocrat managed to obtain some privacy for the two of them by luring her prospective mate beneath the waves at the bottom of Metropolis Harbor. There, Maxima revealed that she could bring new life to Krypton's lost race by giving to Superman what no earth woman could: children. While the Man of Steel expressed among other things that he had no desire to father despots, it was soon revealed that an ancient artifact called the Eradicator was interfering. Earth's champion had been reformatted in favor of the sentient program's own cold, cerebral, and unemotional matrix. Not knowing where this attitude of dismissal was coming from, Maxima ceased making advances at Superman during this initial encounter, stating: "Sazu was right, you are unworthy of the bloodline, but not because you are overly merciful. Far from it. You have become heartless, passionless. Whatever fire that once lurked within has been eradicated, replaced with a presence of horrible sterility. I'll not find a mate in so cold a knave!" Ultimately, these rocky beginnings set a precedent for the type of rapport that Maxima and Superman would have in future confrontations.

As time passed, Maxima's fury towards Superman abated when Brainiac gained control over Warworld, and used the engine of destruction to wreak havoc on her home planet of Almerac. To save her people from complete annihilation, the Warrior Queen pretended to ally herself with the powerful telepath, and acted as his chief officer. As the cosmically powered Brainiac proceeded towards Earth to engage Superman and a host of other heroes in battle, Maxima took advantage of the chaos and flipped over to the side of the heroes. As soon as Brainiac's direct connection in the heart of Warworld was severed, Maxima lobotomized him.

Maxima was typically depicted as a haughty and shallow individual with only self-centered motivations, lacking any real depth as a character. By contrast, in her appearances in the comic book series Extreme Justice and Steel, Maxima was developed as an individual with a warrior's sense of honor and a strong countenance of noble pride that had its humorous moments in relation to other characters.

This was evident during Extreme Justice #10 and #11, where Maxima hosted the bachelorette party for Captain Atom's fiance, Plastique, wearing a stylish and elegant "red carpet" dress while everyone else wore jeans to the event that was held in the party room of a humbleTex-Mex restaurant.

This occurred again in later issues of that series, where she's visibly uncomfortable from seeing newly joined members, Zan and Jayna, gorge themselves on junk food at a mall food court.

Maxima has 213 comic appearances, most notably: 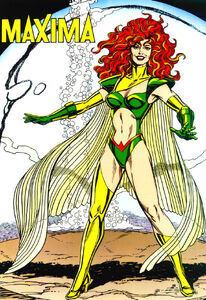 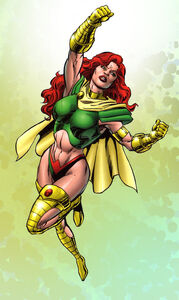 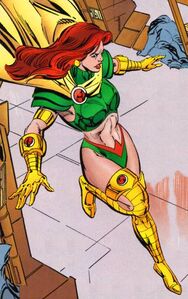 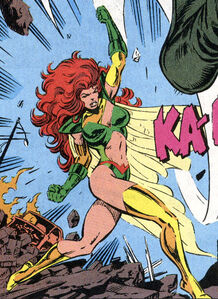 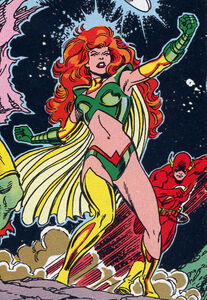 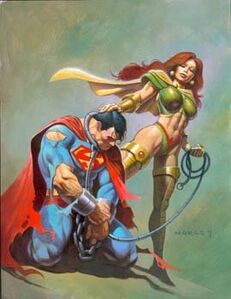 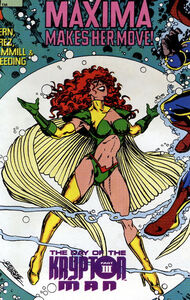 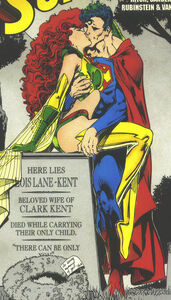 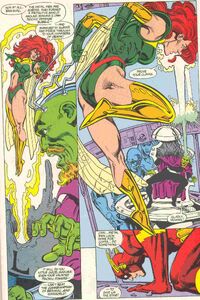 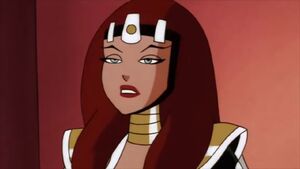 Maxima in Superman: The Animated Series. 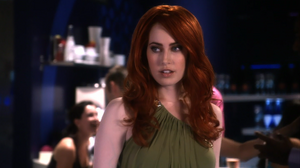 Charlotte Sullivan as Maxima in Smaville. 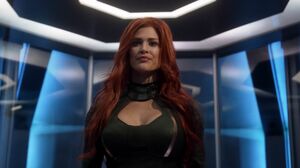 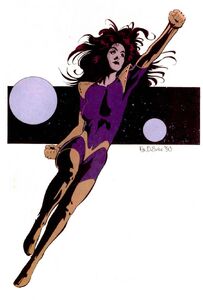 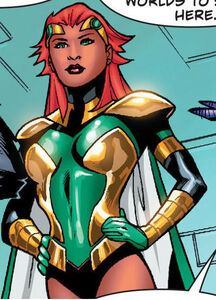 Maxima in The New 52 Comics