English version:
May (as player)
May Birch (as NPC)
Japanese version:
Haruka (as player)
Haruka Odamaki (as NPC)

May is a skinny young girl with fair skin and long, thick mousy brown hair with a side fringe falling across her forehead. Her eyes are blue (Ruby, Sapphire, Emerald) or gray-blue (Omega Ruby and Alpha Sapphire) depending on the games she appears in. Her outfit is the same way, as it also varies from game to game.

In Pokémon Ruby and Sapphire, May wears a red t-shirt with a dark blue circle around her neck, dark blue bike shorts, white miniskirt, red and yellow sneakers, a red bandanna with a white PokéBall print, a yellow waist-pack, and dark-blue and white gloves.

In Pokémon Emerald, May is shown wearing a green bandanna, a sleeveless and short orange tunic with a black collar, black bike shorts, black socks, and red and white sneakers. She also carries a green waist-pack.

May wears a red and white headband with a bow that resembles rabbit ears, a scarlet tank top with a black undershirt, white short shorts with black lycra mini-leggings underneath, yellow and black ankle boots with orange soles, and short red and white socks (although they are usually hidden and no official art shows them, May's socks can be seen when she removes her boots in Norman's Gym). She also wears a yellow and green fanny pack and keeps a Mega Bracelet on her left wrist.

May is the daughter of Norman, the fifth Gym Leader in Hoenn and the Gym Leader in Petalburg City. She was born in Olivine City in the Johto Region and moved to Littleroot Town in the Hoenn Region, where she met and befriended Brendan, the son of Professor Birch who becomes her rival.

In Emerald, she has to stop both Team Aqua and Team Magma from destroying Hoenn and the world. 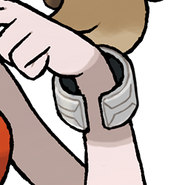 May with Brendan from the Pokémon OmegaRuby and AlphaSapphire animated trailer.