Find the secret of immortality and save her clan

May Chang is a major supporting protagonist in the manga series Fullmetal Alchemist and the anime series Full Metal Alchemist: Brotherhood. She is a young princess from Xing who travelled to Amestris to find the secret of immortality and save her clan.

May is a short young girl of Xingese ethnicity with fair skin, dark-colored eyes, and dark braided hair, with her hair ending in two buns on opposite sides of her head that let down six strands of her hair that reach to her knees. She also wears light and dark-colored, eastern-style clothing, similar to the Xingese traditional royal attire, and a light-purple bag around her left shoulder and right waist. She is often holding her pet panda Xiao Mei.

In her younger years, May wore her hair in two pigtails similar to Nina Tucker as shown when she remembers the day she met Xiao-Mei.

Mei is a sweet girl with remarkable inner strength. She is independent, intelligent, and amazingly brave. This is evidenced when she crossed the desert between Amestris and Xing with no one but her friend Xiao-Mei, something few people have been able to do. She has a short fuse, and has been known to become emotional easily, but Mei knows when to put her personal emotions aside to achieve her goals. This is shown when she selflessly puts herself in danger to find the Elixir of Life in order to save her family.

The xingese girl is very imaginative, sometimes to a fault. She occasionally loses focus in important situations when her imagination gets the better of her. However, her imaginativeness makes her very creative, and allows her to think of possibilities and effective solutions that most people would not have come up with. At times, her imagination makes her turn a deaf ear to what others are trying to tell her, such as why Al and Ed were looking for her in the north. Fear is something Mei rarely shows, often having greater courage than one would expect a girl her age to have; she faced off with the Maniquin Soldiers and Father during the Promised Day, without any signs of turning back.

On her way to Amestris she nearly dies and is rescued by Scar and Yoki, two men on the run from the law. May joins up with them for the most of her journey. May has a crush on Edward Elric at first, picturing him as a tall and handsome man. When she learns how short he is she loses interest though. May is there when the group first encounters Father and her and Scar are the only ones who can use their alchemy against him. After Alphonse saves her life by hiding her in his armor and May learns of his real body she begins to fall for him instead. Later Ed and Alphonse go looking for May after they have parted ways since they want to learn how to use Alkahestry from her. They believe that this skill is the only way to defeat Father. After a long journey she eventually gets reunited with Alphonse only for the two to part ways once again. But this does not last long since Alphonse goes after her group to warn them that the capitol is not safe. May's group finds Al in the snow and he is able to warn them. May tries teaching Alphonse Alkahestry, but he has a hard time comprehending it. After the group defeats Envy they give him to her and send her home so she can show Envy to the emperor and save her clan. When May gets support from the people of a village though she decides that she cannot abandon Amestris. May is tricked by Envy into heading to where father is and she returns to the capitol. May is attacked by a bunch of Mannequin Soldiers when she enters the tunnels and manages to fight them off pretty well. Unfortunately Envy becomes reborn when he is eaten by one of the Mannequin Soldiers and uses them to restore his body. Envy chases May through the tunnels and eventually the pipes beneath her break and she falls into where Edward, Scar, and the people they are with at the moment are. May ends up fighting beside them and is one of the few people who faces Father during the final battle. During the last phase of the Father fight Alphonse sacrifices his armor body to shield May from a powerful attack of Father's. Then Alphonse tells May to sacrifice his essence in the real world to restore Ed's arm so he can fight Father. After Father is killed and Ed saves Alphonse, he apologizes to May for making her sacrifice him.and the two spend a little time together before she must return to Xing.

At the end Ed jokes around that Alphonse has feelings for May. Alphonse does not deny anything but does not confirm his feelings simply calling May a nice girl. Two years later Alphonse plans on going to Xing and learning Alkahestry with May while traveling the country. The last photograph during the credits shows May and Alphonse side by side behind Edward and Winry who are holding their kids. 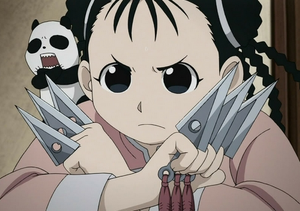 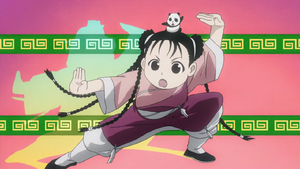 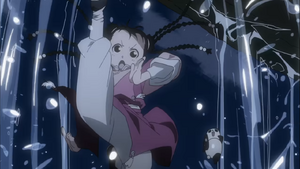 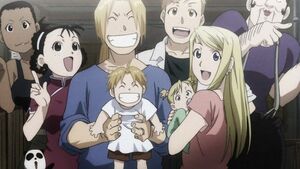 Retrieved from "https://hero.fandom.com/wiki/May_Chang?oldid=2243149"
Community content is available under CC-BY-SA unless otherwise noted.