Member of the Salvation Army

May married Ben Parker, and together they moved to Queens to look after their orphaned nephew Peter Parker. Ben eventually died and May was left to raise Peter on her own. Peter would eventually become an intern at Stark Industries, under the mentorship of Tony Stark. Unknown to her, Peter had actually become the crime-fighting vigilante Spider-Man upon being bitten by a radioactive spider. May would continue to care for Peter, but after his homecoming dance she discovered his secret identity as Spider-Man.

Two years later, May was a victim of Thanos' Infinity Snap. She was resurrected by the Hulk when he reversed the Snap, and found that five years had passed since her death. Stark would eventually sacrifice himself in the final battle against Thanos, and May attended his funeral at his house alongside Peter.

By 2024, May was a member of the Salvation Army and helped other victims of the Infinity Snap find new homes. When Peter went on a field trip around Europe, May packed his Spider-Man suit for him against his will. While he was gone, May started an affair with Stark's secretary Happy Hogan. When Peter returned, his identity as Spider-Man was exposed and May, Peter and Peter's close friends who knew his identity came under pressure.

Peter asked Doctor Strange to make it so his identity wasn't exposed, but the spell caused many villains from alternate realities to come through. May allowed Peter and the villains to use Hogan's apartment as he tried to cure them, but Green Goblin's personality grew loose and he severely injured Peter. When May tried to save him, Goblin fatally impaled May with his glider. As May lay dying in Peter's arm, she told him that "with his great power, came a great responsibility". Peter would keep her words of wisdom to heart, believing in responsibility and giving people second chances.

She was portrayed by Marisa Tomei.

May Parker was greeted by Tony Stark at her and her nephew Peter's apartment. He told her that he had offered Peter a scholarship. Before Peter came back to her apartment, the two were seemingly into a discussion, with Stark complimenting May on her walnut date loaves. When Peter got home from school, May asked him why he did not tell her about the scholarship. Peter, knowing he did not apply for a scholarship and did not receive one, went along with it until he and Stark decided to discuss everything in private.

May later treated Peter's injuries. When she asked where he got his bruises, Peter claimed that he had gotten into a fight with a Brooklyn guy named Steve and his huge friend.

Two months later, May let Ned Leeds, a friend of Peter's, into his room so he could build his Lego with Peter. A few minutes later, May heard a crash and asked what it was which Peter replied that it was nothing. She came by the room, to find Peter in his underwear and Ned's Lego scattered over the floor.

She invited the two to a Thai restaurant which Peter accepted, but told May that Ned was unable to go. Then, May told Peter to perhaps put on some clothes before they went out. At the restaurant, May commented on how Peter had barely touched his food. Seeing that her nephew was distracted, she turned around and saw on the television, footage of the Robbery at Queens Community Bank. May tells Peter to run for safety if he ever sees something like that happening. A waiter then gave her an extra helping of food which surprised May as she did not order it. The waiter insisted that it was on the house, and once he left Peter pointed out that he had given it to her out of sheer physical attraction.

A few nights later, May dropped Peter and Ned off at Liz Toomes' party, telling him that it was okay to be nervous. Before the two got out of the car, May complemented Ned on his hat. After receiving a call from the Midtown School of Science and Technology about Peter attempting to skip school and leave detention early, May waited for Peter to come home so she could talk to him. When Peter came home, she confronted him, informing him that she knew of his absence from school and his sneaking out of the house. She offered to help him with whatever he needed, only that he had to tell her what was going on. Peter confessed that he had lost the Stark Internship. May comforted Peter and told him that she was there for him.

Several days later, Peter ran into their house and told May that he needed her help in preparing for the Homecoming Dance, as he had got a date with Liz Toomes. May helped Peter out by giving him a suit to wear, a corsage and teaching him how to tie. On the night of the dance, May dropped Peter off at Liz's house after giving some last minute advice. A few days after the homecoming dance, May walked into Peter's room and found her nephew in his Spider-Man Suit which she exclaimed her surprise.

Aunt May was one of many that were wiped from existence by the Mad Titan, Thanos. In 2023, she, along with the others who were part of the decimation, were resurrected by Dr. Bruce Banner. After Thanos' death, May and Peter attended Tony Stark's funeral, honoring his sacrifice.

After the return of every turned to dust by Thanos, May joined the Salvation Army and had Peter appear at a fundraiser for the homeless support shelter. When Peter prepared to leave for his school trip, he decided to leave his suit since he just wanted to have a normal time with his classmates. May decided to place the suit within his briefcase, and kept in touch with her nephew while also beginning a relationship with Happy Hogan. She reunited with Peter following his trip and stopping the villain Mysterio, and was questioned by her nephew on her relationship with Happy.

When Peter's secret identity as Spider-Man is exposed by Mysterio, May is interrogated by the United States Department of Damage Control on allowing her nephew to be a vigilante. Peter is later cleared of charges by Matt Murdock, but he and May decide to leave their home to live at Hogan's condo to protect themselves from the public. During Peter's final year at Midtown, May began to volunteer at F.E.A.S.T. and was informed by her nephew of time-displaced individuals who knew of him. She encountered one named Norman Osborn, and advised Peter to cure the visitors instead of just sending back to their universes. Parker assisted her nephew in cleaning his suit while he created cures for Sandman, Electro, Lizard and Doctor Octopus, but they were endangered when Osborn's evil persona returned.

During the attack, May protected her nephew by stopping Green Goblin from killing him, but she was injured after being punctured by his glider. Before dying, May told Peter that he a gift, and that with great power comes great responsibility. After the crisis ended with the visitors returned and Doctor Strange erasing Peter's identity, May was buried and visited by Parker, who kept his aunt's epitaph as a reminder of his life as a superhero. 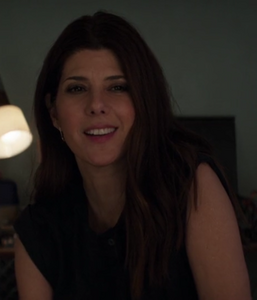 Aunt May with Peter and Happy.