Heroes Wiki
Register
Don't have an account?
Sign In
Advertisement
in: Articles under construction, Mature, Male,
and 35 more

Uncle Adam (by the Griffin siblings)

Acting strangely and dimwittedly.
Performing eccentric, outlandish, quirky and childish acts around the city.
Shooting at his "offenders" with a cat launcher.

Mayor Adam West was one of the major characters of TV Series Family Guy. He was the eccentric mayor of Quahog and Carol Pewterschmidt's late husband.

He was voiced by the late Adam West.

He was a comical, playful and stupid, but he was also gentle and kind, especially with his wife, he would do anything for Carol, in fact, one time he finds that Carol is running around with another Mayor in the episode "Valentine's Day in Quahog" and fights for her. But after he is victorious, he finds she may have also been fooling around with Mayor McCheese.

Mayor West goes on trial for murder in the episode "12 and a Half Angry Men" when an aide is found stabbed to death and the evidence points to him. Despite a push for a quick guilty vote, Brian Griffin slowly convinces the other jurors that there is reasonable doubt until the Mayor is acquitted.

In the episode "The Simpsons Guy", in the courtroom scene, Mayor West is paired with Mayor Joe Quimby. They both leave to get high.

He also appeared in the crowd from the episode "Roasted Guy".

He appeared with Mort Goldman and Tom Tucker them that are back from vacation and make a mockery of Peter, Joe, Cleveland, and Quagmire.

Mayor West dies in Season 18 and the high school in Quahog is renamed after him to honor his legacy. 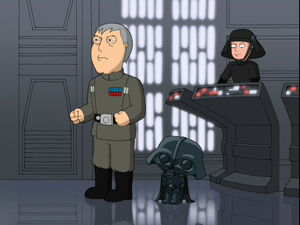