McSquizzy is one of the secondary protagonists in the Open Season franchise. He is a Scottish-accented gray squirrel voiced by Billy Connelly.

McSquizzy is usually grumpy, short-tempered, sassy, bitter, territorial, and selfish. However, he is also shown by using his anger off at others that are greatly bothered by, making him not all bad.

McSquizzy has somewhat of a dislike for Elliot due to his idiotic, confused personality. However, he doesn't hate him completely as he has assisted him on missions. 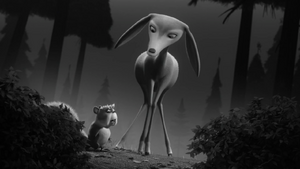 Retrieved from "https://hero.fandom.com/wiki/McSquizzy?oldid=1527973"
Community content is available under CC-BY-SA unless otherwise noted.