Heroes Wiki
Register
Don't have an account?
Sign In
Advertisement
in: Outdated Articles, Nurturer, How to Train Your Dragon Heroes,
and 28 more

Taking care of her offspring.

Protect Fishlegs at all costs.

Meatlug is one of the two tritagonists (alongside Fishlegs Ingerman) of DreamWorks' How to Train Your Dragon series. She is Fishlegs' dragon, and eventually has an offspring named Fishmeat in The Hidden World.

Meatlug was one of the dragons who was stealing the flock from the Vikings and feeding them to the Red Death out of fear. She was then captured by the Vikings of Berk and imprisoned in Viking training where vikings are trained to kill dragons.

Fishlegs takes her as his dragon after Hiccup Horrendous Haddock III helps Snotlout Jorgenson train Hookfang. They help Hiccup and Toothless defeat the Red Death. Toothless later kills the Red Death, but Hiccup loses his leg in the process. Eventually, after this battle, Vikings and dragons are able to coexist.

Meatlug first appears in the film when she, along with Fishlegs, competes in the Dragon Races. Later on in the film, she and the Dragon Riders and their dragons (minus Hiccup, Toothless, Astrid, and Stormfly) are seen flying around Berk briefly.

This drives Meatlug and all the other dragons out of the Bewilderbeast's control, and they all fire on him until he and his abusive master, Drago Bludvist, are forced to retreat. Meatlug soon reunites with Fishlegs and are later seen competing in the Dragon Races once again.

In this film, Meatlug has a hatchling named Fishmeat, who is always seen taken care of by Fishlegs. 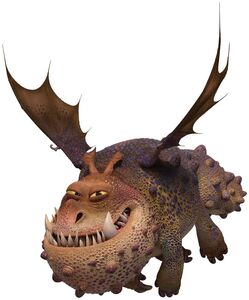 Meatlug falling under the Alpha's control.