Become student president, Have animal's like her, Protect her friends, Marry Zenkichi

Martial Artist, Leader, In love heroine
Medaka Kurokami is the titular main character of the Anime, Manga Medaka Box. She is the second and youngest daughter of Kajiki Kurokami and birth child of Hato Kurokami. She has two elder half-siblings, Maguro, an elder and only sister-complex perverted half-brother and Kujira, a stoic elder half-sister.

She is voiced by Aki Toyosaki in the Japanese version, who also voiced Isuzu Sohma in Fruits Basket (2019), Yui Hirasawa in K-ON!, Su in Shugo Chara!, Yunyun in KonoSuba, Kazari Uiharu in A Certain Scientific Railgun, Kofuku in Noragami, Ristarte in Cautious Hero: The Hero Is Overpowered But Overly Cautious, Mirim in Queen's Blade: Rebellion, Mew in Mewkledreamy, Bonbori in Otome Yōkai Zakuro, Seilah in Fairy Tail, Hand Demon (child) in Demon Slayer: Kimetsu no Yaiba and Illinx in Keroro RPG: Kishi to Musha to Densetsu no Kaizoku, and by Shelley Calene-Black in the English version, who also voiced Mireille Bouquet in Noir, Ageha Chono in Wizard Barristers, Najenda in Akame Ga Kill!, Nobara Yukinokōji in Inu x Boku SS, Ais Wallenstein in Is It Wrong to Try to Pick Up Girls in a Dungeon?, Yuriko Takagi in Highschool of the Dead, Luviagelita Edelfelt in Fate/kaleid liner Prisma Illya, Shimura Otae in Gintama: The Movie, Fujiko Eto in Demon King Daimao, Canaan in Canaan, Cortana in Halo Legends, Hidemi Kinoshita in Btooom!, Ririko Kagome in Rosario + Vampire, Kalifa in One Piece, Zola Axberg in CROSS ANGE Rondo of Angel and Dragon, Kyou Fujibayashi in Clannad, Tomika Amato in Maken-Ki!, Coordiantor in Fairy Tail: Phoenix Priestess, Narvi Stryze in Break Blade and Emera in Tenchi Muyo! War on Geminar.

Beautiful and well-endowed, which she has no reservations in showing off whenever possible, Medaka excels in academics, sports, and just about any activity she tries, with seemingly inhuman results. At the start of the story, she is a first-year student who has garnered 98% of the total number of votes for student council president; she gives a speech where she institutes a suggestion box for various tasks that the students feel would improve the academy. Medaka originally plans that only she and her dear friend Zenkichi Hitoyoshi run the student council, but as the story progresses, Medaka recruits more people to fill the council positions. She enjoys helping others, and is determined to finish any task handed to her. For every task she completes, Medaka rewards herself with a pot of flowers. She hopes that one day she can look outside the council window to see the academy full of flowers.

Medaka grew up in a family of five: her father, her 'legal' mother, her older sister, her older brother, and herself. Her biological mother, the mistress of her father, died from a heart attack directly after childbirth and Medaka believed it was because her mother's sole purpose in life was to give birth to her. Because of her abnormal abilities, she quickly matured and was selected to be part of the Flask Project. However, she ran away after being confronted with the realization that life has no meaning. Shortly afterward, she met Zenkichi Hitoyoshi for the first time; when he showed genuine happiness and amazement for her remarkable abilities, he told her that her purpose in life was to make the people around her happy. Thus, Medaka was reborn and the unbreakable bond between Zenkichi and Medaka begun. She despises her older brother but at the same time holds some degree of begrudging respect for him. She looks up to her older sister and loves her deeply. However, she unwittingly feels lonely because of her incredible abilities and the company of others has actually allowed her to restrain the true extent of her power.

The End: Medaka is capable of learning Abnormalities and completely mastering them, to the extent that she can use them to one hundred and twenty percent of their capability, becoming more skilled with them than even their original owners. This ability allows her to learn any skill quickly, from simple skills like baseball to the impossible feats performed by the members of the Thirteen Party. So far, she has learned automatic movement from Takachiho, hidden weapons technique from Munakata, accelerated healing from Koga, syringe usage from Naze, the ability to receive electrical waves from Yukuhashi, and the ability to send electrical waves from Oudo. However this ability does seem to have its limits, as she cannot learn skills that exceed her physical limits. This ability is also not without its downsides, as she is unable to stop herself from learning an Abnormality when she experiences it. As her Abnormality has developed, Medaka can now learn abilities based off of information or word-of-mouth. She is now able to copy Minuses, and has successfully learnt the Five Forks from only a secondhand description.

- Observation: Very similar to Maguro’s Analysis, it is the method through which The End copies other abilities. In Altered God Mode it is “perfected” and allows her to see the processes of actions broken down to allow easier observation and copying.

- Advanced Growth Rate: Medaka is incredibly gifted. By the time she was six months old, she had matured much more than her older siblings, progressing through infancy at an accelerated rate. Nobody was capable of teaching her anything because she could only learn from experiencing it.

- Superhuman Physiology: Medaka has inhuman skills of strength, speed, and agility. These are enhanced when she enters Perses or Mars Mode. Inhuman feats include: balancing on a small arm water wing, destroying a school building while constricted by tiny wires, and quickly moving the other three members of the Student Council into three lockers in a matter of seconds before a giant explosion occurred.

- Intimidator/Alpha Presence: Medaka’s raw power, which humans perceive as charisma and choose to follow her, is sensed by animals and inspires pure terror. Thus, although Medaka adores animals, they in turn are frightened to death of her and will avoid contact at all costs.

- Combat Expert: Medaka is a Red Belt in Judo and is highly skilled in Kendo (even thought she just “tried her hand” at it). Using only the basics of what is taught, she could do the Replication Technique (stepping forwards and backwards so fast that she creates clones of herself) and steal things out of peoples hands without anyone noticing (bare hand disarm). Zenkichi has commented that she is best in mid-air.

Medaka is notably the only character from Medaka Box to appear as one of the playable characters in the anime crossover fighting video game J-Stars Victory Vs. 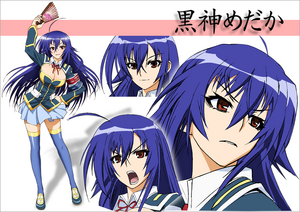 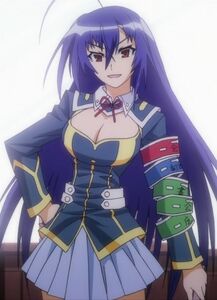 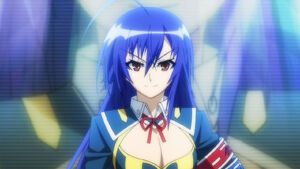 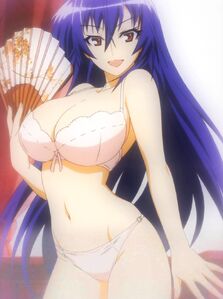 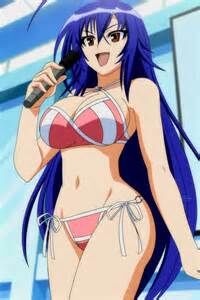 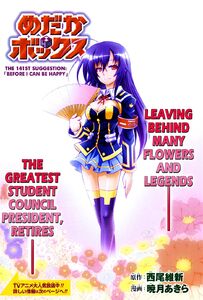 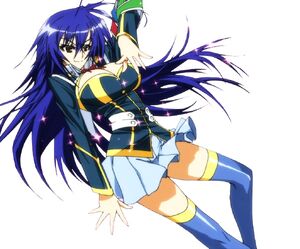 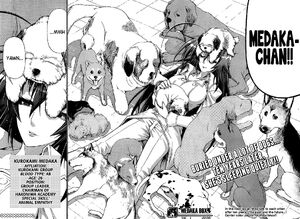 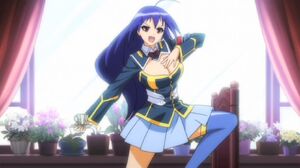 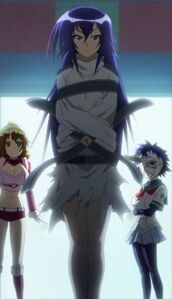 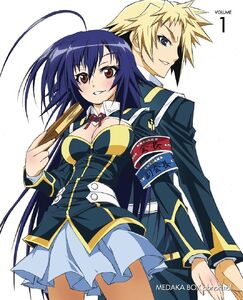 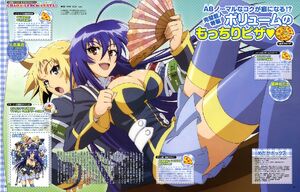 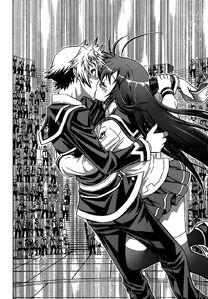 Retrieved from "https://hero.fandom.com/wiki/Medaka_Kurokami?oldid=2169520"
Community content is available under CC-BY-SA unless otherwise noted.