Pet; Comic rellif
Meeko is a mischievous raccoon and the tritagonist from Disney's Pocahontas and its sequel.

He is voiced by John Kassir.

Meeko is a raccoon and one of Pocahontas' animal friends. He is sly, very greedy and loves to steal from anybody. He is usually seen with either Flit or Percy. Flit finds him annoying, as does Percy.

In the first film Meeko is first introduced in the same scene as Pocahontas and her best friend Nakoma were playing. He is then shown to be Pocahontas' confidente when her father wants her to marry a local hero by the name of Kocoum. However, she strongly objects the idea as he's too serious, and she's as steady as a river. Later on, a band of settlers from London arrive to claim the land as their own. Meeko accompanies Pocahontas as she investigates the "pale-face." Meeko nearly blows her cover when he almost leads the settler John Smith, to Pocahontas who is hidden in a bush. Pocahontas was told that the settlers were dangerous, but after witnessing how kind John Smith was to Meeko, her thoughts about them began to change.

Later on, Meeko meets Governor Ratcliffe's dog Percy and begins a rivalry with him. Throughout the film, Meeko and Percy are constantly in pursuit of one another, symbolizing the hatred between the natives and the settlers. When Kocoum is shot dead by Thomas, Meeko comforts Percy, finally putting an end to their quarrels and symbolizing the possible friendship that the natives and settlers can form.

In the end, John Smith is blamed for Kocoum's death and is scheduled to die the next morning. Pocahontas, Meeko, Flit and Percy hurry to stop the event as day breaks. Fortunately, she does so and John Smith is able to return home to London after Governor Ratcliffe accidentally shoots him. As for the rest of the settlers, Chief Powhatan allows them to stay and use the land to build what would become Jamestown, Virginia. Meanwhile, Percy decides to stay with Pocahontas and her friends, much to Meeko's delight.

In the sequel to the original film, Pocahontas is called to London, to represent her people as an ambassador in a peace attempt. Meeko, Percy, and Flit stow away on her ship to join the adventure as well. The heroes hear about John Smith's apparent death. Ratcliffe, the villain from the first film, takes advantage of Pocahontas' arrival in London, by making her seem negative, thus giving King James a reason to want war on Powhatan.

In the end, John Smith reveals himself to be alive, and the heroes reunite and foils Ratcliffe's plans of war. Afterwards, Pocahontas falls in love with John Rolfe, the ambassador for London, and the two return home to Virginia on a ship, with Meeko and the others tagging along.

Meeko disgusted with the idea of Pocahontas marrying Kocoum 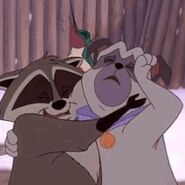 Meeko, Percy and Flit saying their goodbyes by crying and hugging.
Add a photo to this gallery
Retrieved from "https://hero.fandom.com/wiki/Meeko_(Pocahontas)?oldid=843695"
Community content is available under CC-BY-SA unless otherwise noted.