The Jedi Exile, The Exile

Reaching out to companions, helping others, teaching the ways of the Jedi to others (depending on the player)

The Messiah / The Chosen One / Unwanted Hero / Scapegoat

Meetra Surik, commonly known as The Jedi Exile, was a female human Jedi who joined Revan in the Mandalorian Wars and became his best top general. Following her banishment from the Order she became a hermit before reconnecting with the Force and saving the Galaxy from the Sith Triumvirate led by Darth Traya, Darth Nihilus and Darth Sion.

Meetra Surik was a Jedi Apprentice who chose to join Revan and Malak into battle against the Mandalorian Wars, against the wishes of the Council who were biding their time.  Rapidly rising through the ranks Meetra became Revan's top general but also like him began to grow more callous and ruthless during the course of the war. This came to a head during the climactic battle of Malachor V, where Meetra Surik gave the order to activate the terrible doomsday weapon known as the Mass Shadow Generator. So great and horrible was the amount of death and destruction caused by this that it created a wound in the Force around the planet and turned it into a corpse of a world, as well as leaving it irrevocably scarred by the Dark Side. Horrified at what she had done, Meetra allowed herself to be exiled by an unsympathetic Jedi Order and from there wandered aimlessly across the galaxy. Ironically, this punishment ultimately proved to be her salvation.

When the Sith Triumvirate appeared and began mercilessly hunting down and slaughtering the Jedi, they neglected Meetra due to her staus as an Exile, allowing her to be found and tutored by Kreia, an enigmatic woman who helped her reconnect with the Force and also her inner altruism. Still desiring to make amends for her previous actions, Meetra began battling the Sith and other corrupt individuals across the Galaxy and doing what she could to heal it.

Ultimately Meetra gathered together a handful of surviving Jedi Masters, only for them to turn on her. The Masters were killed by Kreia, who revealed herself to be one of the three members of the Sith Triumvirate. After killing the other two, Darth Nihilus and Darth Sion (who harbored romantic feelings for Meetra) the Exile confronted Kreia at the Trayus Academy on Malachor V, the very same world Meetra had left scarred in the Force years ago. In this final duel Meetra triumphed over Kreia and was able to slay her.

From there she and those of her allies who she had taught to be Jedi set about rebuilding the Jedi Order. Meetra ultimately went searching for her old mentor Revan, confronting the Sith Emperor alongside him. Tragically, she was killed by Lord Scourge, but as a Force Ghost kept Revan sustained over the next 300 years to prevent the Sith Emperor from destroying him.

A sketch of the Jedi Exile 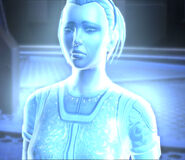 The Jedi Exile as a Force Ghost
Add a photo to this gallery
Retrieved from "https://hero.fandom.com/wiki/Meetra_Surik?oldid=1696028"
Community content is available under CC-BY-SA unless otherwise noted.