Uncover The Secrets About His Origin

A long time ago, Mega Man Volnutt was known as Mega Man Trigger. Trigger's primary function was as a Purifier Unit (Irregular Hunter in the Japanese version) on a synthetic planet called Elysium, a place that housed what is called the "Master System". The purpose of the Master System was to watch over the Carbons (essentially the equivalent to humans, though artificially created) on Terra. His job as a Purifier Unit was to eliminate any Aberrant Units that threatened the Master System. Trigger was also always close to the Master throughout his tenure as a Purifier Unit. One day, the Master requested Mega Man to travel with him to Terra so he could see the Carbons, even though the Master could not survive long outside of Elysium. They used a shuttle pod and landed in Calbania Island, where the Master compares the life of the Carbons with Elysium, and realizes that while he lived in luxury for 3000 years, Elysium was cold and sterile, while the Carbons are happy even with hardship, pain, aging, and subsequently dying, and decides to give Mega Man the final command to destroy the Master System to make things right again. Before dying, the Master gives his genetic code sample to protect Mega Man, and orders him to delete all data in Elysium's library.

After the Master's death, Mega Man Trigger tried to fulfill his dying wish. The units from the System tried to stop Trigger, thinking he became an Aberrant Unit. As time went by, Yuna (Mother Unit of Terra) decided to take a neutral position, neither helping nor fighting against Trigger. Frustrated with Yuna's decision, Sera (Mother Unit of Elysium) traveled to Terra herself to stop Mega Man, and the two fought each other to a standstill, expending all their energy. Trigger's original body was almost totally destroyed in the fight, and all his parameters had to be reset to heal (similar to formatting a hard drive), transforming him into a baby without any memory of the past. To avoid his memory being wiped out and make sure Sera would never find the Master's genetic code, Trigger transferred his essential data files to Data. Yuna took the opportunity to seal both inside stasis fields, with Mega Man and Data being sealed inside a ruin in Nino Island and Sera with Geetz in Forbidden Island, where they stayed for a long period.

Mega Man Volnutt appears in the Mega Man's final smash along with the others Mega Mans, he also appears as a collectible trophy in both versions.

Mega Man Volnutt reappears in the Mega Man's final smash, he also appears as a ace primary grab spirit. Its spirit battle is a timed battle on The Great Cave Offensive stage against thee Mega Man with high gravity and decreased jump power on the player. 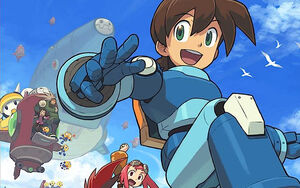 Volnutt and his crew 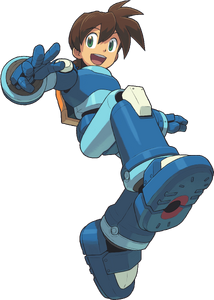 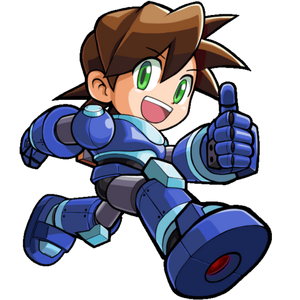 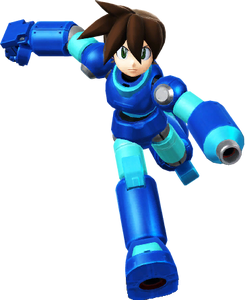 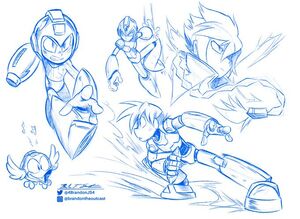 Volnutt drawn by Brandon Santiago, writer and artist of Erma.