To be with Syaoran (failed, formerly)
To help Syaoran and Sakura to be together (second film)

No information
Meiling Li is one of the supporting characters from the anime adaptation of Clamp's Cardcaptor Sakura. She is cousin of Syaoran Li and anime only character.

Meiling is supportive to Sakura Kinomoto and is always helping her out along with Syaoran whenever she needs them.

In the Japanese version, she is voiced by Yukana Nogami, who also voices C.C. from Code Geass, Cure White from Futari wa Pretty Cure and Azusa Yumi from Soul Eater.

In the English version of Cardcaptors, she is voiced by Nicole Oliver, best known voicing as Princess Celestia from My Little Pony: Friendship is Magic, Zoe Trent from Littlest Pet Shop, in Cardcaptor Sakura Movie: The Sealed Card, she is voiced by Julie Maddalena who also voices Hikaru Shidou from Magic Knight Rayearth and in Clear Card Arc, she is voiced by Trina Nishimura who also voices Mikasa Ackerman from Attack on Titian, Lan Fan from Fullmetal Alchemist: Brotherhood, Makise Kurisu form Steins;Gate, Mari Makinami Illustrious from Rebuild of Evangelion, and Princess Tomoyo from Tsubasa: Spring Thunder Chronicles.

Meiling Li has black hair which is parted in the middle, into two buns on either side of her head and the rest hanging down. While cardcapting, she wears chinese garb, with a prominent ying-yang symbol in the middle.

Meiling Li is well-meaning despite her immaturity, and devoted despite her rash attitude. Her view of Sakura changes from rival to valued friend as the series progresses. When she briefly returns to Tomoeda, she acknowledges Sakura as the person her cousin Syaoran Li loves. She smiles at Syaoran, tears in her eyes as she concedes that the engagement is called off, then leaves the apartment as he attempts to go after her. Meiling spends the night at Tomoyo Daidouji's house to release all of her sadness through much screaming and tears without burdening Syaoran. This moment shows not only how much Meiling has matured, but also how much she cares for him, as she gives up what she has held dear for most of her life in order for him to be happy. Although Meiling is heartbroken, she supports and helps to progress Sakura and Syaoran's kindling relationship, out of love for both of her dear friends.

In the English dub version Cardcaptors, she is renamed Meilin Rae, so that the relation between Syaoran as cousins is nonexistent due to Nelvana deeming it inappropriate, and is instead presented as a childhood friend of sorts. Although Meiling's infatuation for Syaoran is drastically edited, it is still somewhat presented as her having a enormous crush and admiration for him. Meiling's personality is basically the same, as she is shown to be a braggart, somewhat conceited, and defensive when it comes to anything to do with Syaoran, yet at the same time, having guts, consideration, and determination. Although she still shows jealousy towards Sakura for being with Syaoran all time, in the English version, the relationship between Syaoran and Sakura is scaled back to being close friends as opposed to lovers. Furthermore, all of the moments pertaining to Meiling having an engagement to Syaoran have been edited out.

In episode 43 of the dub, Sakura tells her that she wishes she could stay longer, and Meiling says that she'll try and visit soon. She then suggests that Syaoran and Sakura could visit her as well. Sakura complies, and she and Syaoran say goodbye to Meiling as she boards the plane.

One night, one of Meiling's bird escaped from its cage, leaving her in tears. Syaoran, after witnessing the situation, simply said "Don't cry," and ran into the woods to find the lost bird. It began raining while he was away, and after what felt like hours he finally returned, successful. Meiling was not only happy that he found the bird but also quite touched that he would do such a thing for her. She embraced Syaoran, crying again (though out of relief), though it only left him confused, asking if she had suddenly hurt herself somewhere. Since then, Meiling has watched over Syaoran and been by his side. Not too long after the bird rescue, Meiling confesses her feelings to Syaoran. This appeared to be a random outburst, as Syaoran had been quietly reading opposite her on the patio table. Meiling continued to declare that she liked him more than anyone else, and she argued that Syaoran liked nobody else more than he liked her. Syaoran stuttered in agreement (though it was probably only true because he had never yet thought of liking girls, which placed Meiling as first out of a group of one), which further led Meiling to declare herself engaged to him. The promise was that she would give him up if he ever found somebody he liked more than her; until then, she would be his bride. The promise itself took some persuasion, as Meiling leaped onto the table, nearly shrieking "All right?!" in his face until he finally accepted.

In episode 60, Meiling briefly return to help Sakura sort out the strange occurrences that are happening with the cards. They come across the park where several metal penguins are charging at them. Meiling fights them and hurts her hands, while Syaoran and Sakura take the larger one on. Sakura knew that she couldn't use the Time card, but Meiling told her to try the Freeze card. Once that worked, Syaoran used his lightning spell to destroy them.

Later, at Syaoran's house, Meiling finally figured out that Syaoran is in love with Sakura because he is now calling her by her first name, something he only does for his sisters and Meiling. Seemingly accepting of the matter, Meiling breaks off their "engagement;" in reality, however, she is heartbroken and visits Tomoyo upon her suggestion to bawl over it without bothering Syaoran, telling her that she cannot bring herself to hate Sakura. Feeling better, Meiling encourages Syaoran to confess his love to Sakura as soon as possible, since Sakura would never know about them otherwise, before leaving the next morning, Meiling leaves a cryptic message for Sakura indirectly stating she should pay attention to Syaoran's feelings.

This last scene from episode 60 was changed in the Cardcaptors dub, however. Meilin Rae tells Li Showron (Syaoran) that he is lucky for being needed. She says that he will always be tied to the Clow Card's destiny, as he is a better Clow Reed descendant than her, and he has magical powers. Just before she leaves, Li confesses that they need her too. He apologizes for not telling her that more often. She stays at Madison Taylor's (Tomoyo's) house and the next day, goes to the airport.

Meiling returns with Syaoran over their summer break to visit Sakura and Tomoyo back in Tomoeda, mainly to help Sakura confess her love to Syaoran. She gets a part in the school play performed during the Nadeshiko Festival when Syaoran has to fill in for Yamazaki after he is injured during an attack by the Nothing Card. Meiling and Tomoyo are erased by the Nothing Card at the beginning of the final battle against it, and are returned safely after Sakura seals the last card and confesses her love for Syaoran.

Martial Artist: Meiling has shown great skill with martial arts, at one point even battling on equal footing with the Fight card. During Eriol's test, she also fought several rock penguins, though this did leave her hands injured.

Perceptive Combat: Despite not having magic, she is able to analyse situations and come up with a solution. This is seen when she tells Sakura to use the Freeze card to stop the penguins. 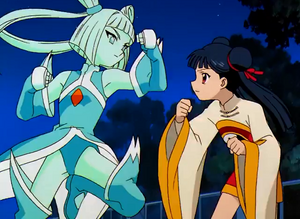 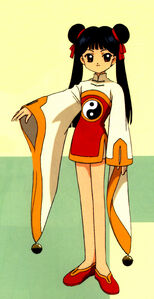 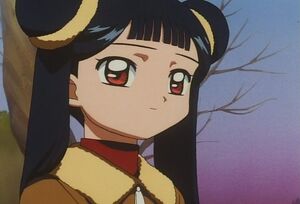 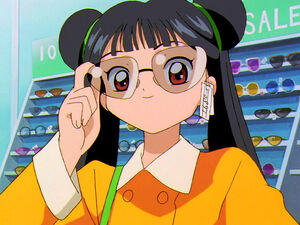 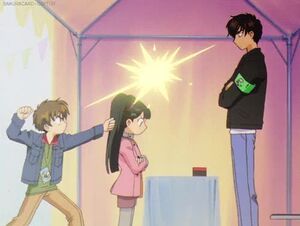 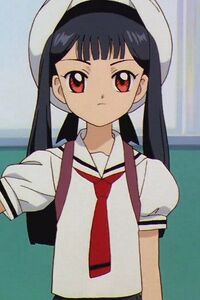 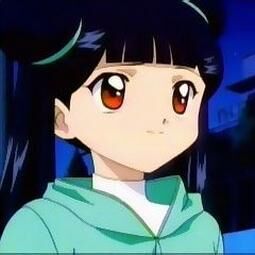 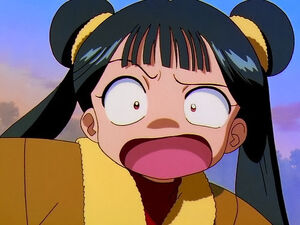 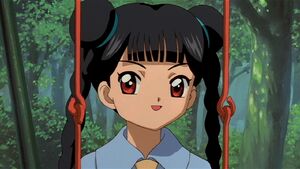 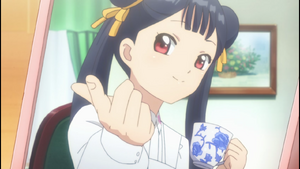 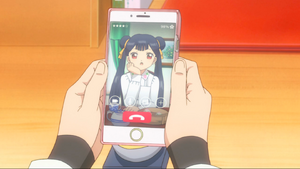 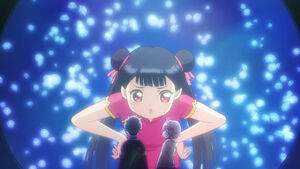 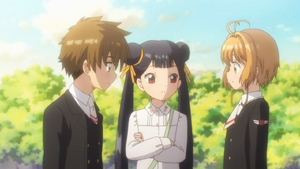 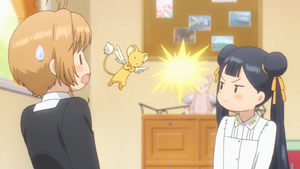 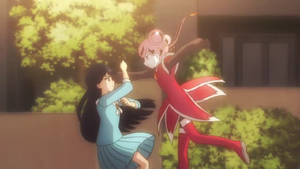 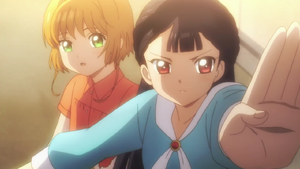 Retrieved from "https://hero.fandom.com/wiki/Meiling_Li?oldid=2023367"
Community content is available under CC-BY-SA unless otherwise noted.