Live her life free of oppression

She is voiced by Brittney Karbowski, who also voiced Wendy Marvell in the English dub of Fairy Tail. As a child, she is voiced by Yssa Badiola, the lead animator of Nomad of Nowhere.

Melinda was born to a poor farmer, who was also a magician. However, during this time, King El Rey had outlawed magic, and was hunting down all magic users so he could have all magic to himself. Papa kept his magic a secret, and did the same when Melinda showed talent for it as well. Papa would often use his magic in secret to bring to life a Scarecrow, who served as Melinda's friend and helper. However, El Rey discovered them, and Papa was forced to clad the Scarecrow in armor and order it to protect his daughter. As El Rey's forces attacked the farmhouse, Melinda tried to fight back, but the Scarecrow (now the Knight), grabbed her and escaped, leaving Papa to fight against El Rey's forces and give up his life to save his daughter.

Though Melinda resented the Knight for not letting her help her father at first, she realized just how much the Knight was committed to caring for her when it saved her from a giant spider. She and the Knight became traveling companions looking out for each other, though Melinda wanted revenge on El Rey and wanted to seek out any surviving magic users to help her. The Knight was against this, and wanted her to stay with it to be safe. However, Melinda decided she could not live hiding anymore, so she used a memory-wiping spell to wipe the Knight's memory of her and go off on her own. The Knight, with no memory or identity, became the Nomad of Nowhere and lived as a secluded hermit. 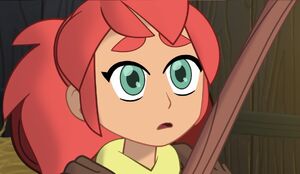 Melinda as a child. 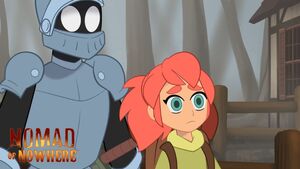 Melinda on the run with the Nomad, then known as the Knight. 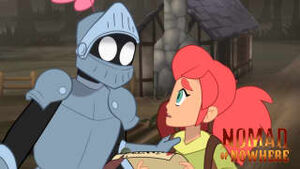 Retrieved from "https://hero.fandom.com/wiki/Melinda?oldid=1615561"
Community content is available under CC-BY-SA unless otherwise noted.