running his bar
play fighting with his friend Ban

Meliodas is the main protagonist of the manga/anime series The Seven Deadly Sins. He was the Dragon Sin of Wrath, captain of the titular group of warriors, former leader of the Ten Commandments, the older brother of Zeldris, the eldest son of the Demon King, and the lover (later husband) of Elizabeth Liones.

Despite having the appearance of a child Meliodas was actually much older, being over 3000 years old. He was exceptionally short compared to other characters with messy blond hair and a pair of emerald eyes. He also lacked any facial hair further accentuating his adolescent appearance. Regardless of his stature and youthful looks he was relatively muscular, possessing an array of well-developed abdominal and arm muscles. He was often shown wearing an ordinary clean white button-front shirt and a black sleeveless vest on top with a loosely-worn tie. His broken sword the Dragon Handle's scabbard was held on by a green leather belt with gold-colored buckles. Without any socks he wore a pair of black boots. His most distinctive trait was his Dragon Sin of Wrath symbol carved at the top of his left bicep just below his shoulder.

During his tenure as the leader of Danafor's Holy Knights he wore their traditional armor much like Cain Barzad. Ten years ago he wore full-body silver armor with a unique helmet like the rest of the Sins. He also wielded a dagger that appeared to be his Sacred Treasure. Meliodas was issued a wanted poster like all of the Sins were after being framed for the murder of Great Holy Knight and Holy Knight Grandmaster Zaratras. The current issue of his wanted poster did not accurately depict him but coincidentally depicted his adoptive brother Estarossa.

After liberating Liones from its Holy Knights Meliodas later had a new outfit: a long-sleeved high-collared white tunic over an undershirt, a pair of gloves, knee-length black pants and black boots. This outfit was a bit more formal like a uniform with the name of his tavern the Boar Hat embroidered on his back.

After his time spent in Purgatory following his death by the hands of Estarossa and the other Commandments Meliodas had seven permanent scars where his Demon hearts were located, sported a new black Demon Mark similar to the one he previously had as leader of the Ten Commandments and wore his debut outfit.

Meliodas' dominant traits are his frankness and his utter fearlessness, shown when he remains composed seeing the Rust Knight who was later revealed to be Elizabeth Liones. Due to his horrible cooking when his customers vomited onto the Boar Hat's floor he instructed his companion Hawk to clean up the scraps and scared him by saying phrases such as "roast pig" if he complained, hinting he would actually cook the talking pig. He was also shown to be very bawdy and loved to tell jokes. He frequently took advantage of Elizabeth's naivety, touching her body and searching up the bottom of her clothes, not ashamed of doing so in public or in front of her father King Bartra Liones. He also had a strong sense of justice and was willing to help people in distress. Even when injured he tried not to show weakness and stayed strong, especially in front of his friends. He held resentment upon himself for being a failure as an older brother to Zeldris and also clashed swords with him in the past.

Despite his title as the Sin of Wrath he appeared to be a very calm person. However, if his companions or friends were harmed in any way he became greatly angered. He was also shown to fall into a state of extreme rage when someone tried to take his sword, being capable of scaring the Holy Knight Golgius and leaving a permanent scar on Ban's neck despite his regeneration abilities and immortality. It had been hinted Meliodas was guilt-ridden over the fate of Danafor, saying his sin was being unable to save the kingdom. Ban and Cain pointed out that Meliodas tended to be soft and naive due to him never killing anyone, even someone like Guila or her father Dale who were serious threats to the group and others. Meliodas disliked killing, preferring to be merciful. Elizabeth pointed out that Meliodas was not naive or a simpleton but just really kind.

Meliodas appeared to have a darker side to his personality as shown when using the Demon Mark that appeared on his forehead when in trouble. When using the Mark he became cold, quiet, ruthless and murderous as he attacked and killed anyone near him without mercy. However, he did not try to kill Elizabeth, possibly due to her resemblance to Liz who was his previous lover. Despite being known as a womanizer to most people Meliodas seemed to be truly serious whenever anything relating to Elizabeth or Liz was involved but still cracked dirty jokes and told of women's three-sizes.

It turned out Meliodas always tried to keep his emotions under control due to his immense power. In the past he destroyed the Kingdom of Danafor in a rage after the death of Liz. Also, after seeing a younger Elizabeth injured trying to help the Seven Deadly Sins he almost lost himself again; at that moment Merlin sealed Meliodas' immense power. The other Sins also revealed he never acted like a pervert ten years ago in all the time they had known him before as he had shown no interest towards other females. This seemed to change when a grown Elizabeth appeared in his life and he started doing so which also hinted at his single interest towards both Liz and Elizabeth; this perversion was really meant to be a joking act.

After returning from Purgatory Meliodas's personality changed drastically whenever he used the Demon Mark, becoming far more ruthless in battle and wasting no time in his attempts to kill his former demon allies, even stating his outlook changed and smiling as he attempted to destroy them. During his last fight with Fraudrin he used a clone wielding half his strength to give Fraudrin hope of defeating him only to erase it and put him in despair at the hopelessness of defeating his true power, relishing the position he placed his historic enemy in. This was contradictory to his previous beliefs and actually Meliodas' old demonic self who was revered as the most vile Demon in existence second only to his father. Every time he died Meliodas's emotions were slowly eaten by his father while passing through Purgatory reverting him back to that state. Meliodas professed to Elizabeth he was genuinely terrified of becoming that person again.

Meliodas' skill and power are legendary. He is the captain of the legendary Seven Deadly Sins and was once the leader of the Ten Commandments. Like all members of the Demon Clan, he is capable of manifesting their mysterious power of darkness, which enhances both his physical and magical abilities and he is also knowledgeable of demonic enchantments. He is most well-known for his skills with the sword and for his pure physical prowess, but he also has incredible magical abilities, notably his virtual immunity to magic attacks coming along with his ability Full Counter. An example of his immense combat skills was when he fought evenly against both Gloxinia and Dolor at the same time, both characters being on par with his strength. When recovering the power taken from him, the amount of darkness released from the Goddess Amber was enough to blot out the sky and the subsequent aftershock from Istar could be felt from Edinburgh which is almost 100 kilometers away. Before the start of the series he got lost in his rage and destroyed the entire Kingdom of Danafor. Merlin, feeling his power was too vast and dangerous for him to control, stole most of it before he could do the same to the Kingdom of Liones. Even with most of his power taken he still had a Power Level of more than 10 times the standard for a Holy Knight of Liones. With his power returned, he is able to easily fight on par with and defeat members of the legendary Ten Commandments despite it only being a fraction of his full power.

After unleashing his full demonic powers in a desperate attempt to break free of Melascula's Dark Cocoon he gained access to more of his power. Meliodas proved capable of easily outmatching Escanor in their fight despite his strength increasing every second, being defeated only when Escanor reach the peak of his powers. He was also able to effortlessly restrain both Zeldris and Estarossa with not even his father's power allowing Zeldris to move and easily restraining his younger brother.

Meliodas was afflicted with a curse by his father and Elizabeth's mother the Supreme Deity as punishment for falling in love with a Goddess and killing and betraying his demonic brethren that revived him without fail no matter how many times he dies, whether via killing himself or getting killed. It additionally prevents him from dying of old age, effectively keeping him immortal. However, he would slowly lose some of his emotions in exchange, slowly returning back into his former self. The curse could last permanently and the only way to lift it was for someone with power rivaling that of his and Elizabeth's parents to do so.

Over 3000 years ago he was the leader of the Ten Commandments until he fell in love with the original Elizabeth and betrayed his own kin in the Demon Clan. His betrayal led to the Holy War. 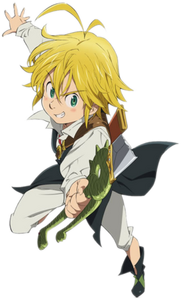 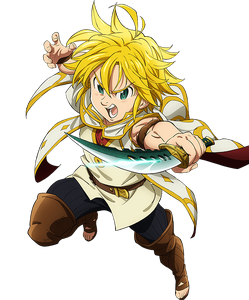 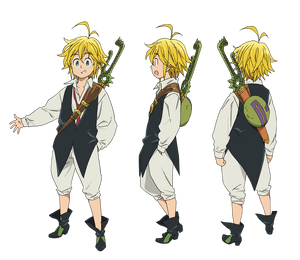 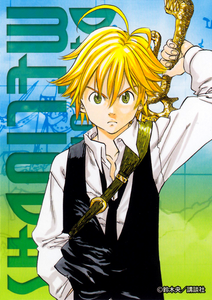 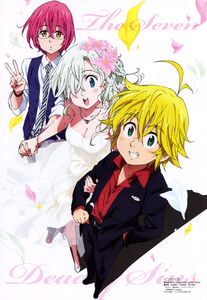 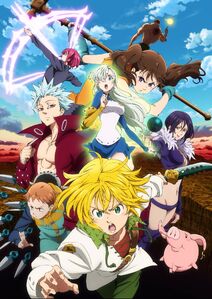 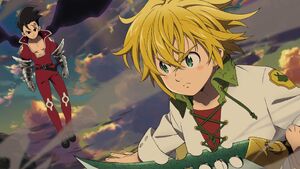 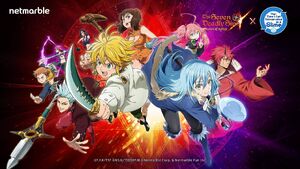 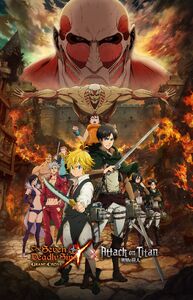 Retrieved from "https://hero.fandom.com/wiki/Meliodas?oldid=2240026"
Community content is available under CC-BY-SA unless otherwise noted.