Become a Hero who supports other heroes with support gear.

Melissa Shield is a major character in the My Hero Academia franchise, started off as one of the main protagonists in My Hero Academia: Two Heroes. Melissa is born quirkless just like Izuku and is the daughter of David Shield. Despite born without a quirk, she is still determined to become a hero without the need of a power but instead use his gifts to create Support Gears with a new type of modification that will help serve other Pro Heroes as well, dreaming to become like her father.

She is voiced by Mirai Shida in the Japanese dub, and by Erica Mendez in the English dub.

Melissa is a slim and attractive Caucasian young woman of slightly above average height with quite a round face. She also has wavy blonde hair which reaches halfway down her back.

She ususally wears a white short-sleeved dress shirt with plaid cuffs, a large bow of the same design at her neck, and a dark pink waistcoat. Likewise, Melissa wears gray pants, dark brown boots and glasses.

Melissa is described to be a smart, kind, optimistic, and friendly girl, born with a talent of inventing and coming up with ideas for a new Support Gear to be made and is quite the social type as she gets long with everyone very well.

She dreams of becoming like her father one day ever since she was diagnosed as Quirkless from that day on, but doesn't mean it backed her down easily. She remained determined to achieve who she wanted to be and wanted to do, especially with supporting her father's work.

Since she's one of the minority that doesn't have a Quirk, Melissa focuses on inventing support items for heroes like her father does. Her equipment seems to be vastly more advanced than even Mei's, compressing pogo sticks into a tiny device the size of an earpiece that can be activated and deactivated with a push for a button. Her Full Gauntlet allows Izuku to use 30% of One For All without repercussions and even fire off three full power Detroit Smashes without injuring himself before it's destroyed. 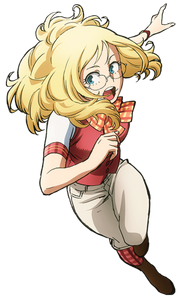 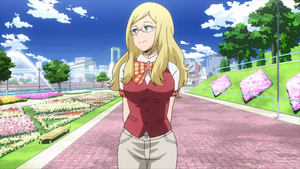 Melissa's debut in the anime. 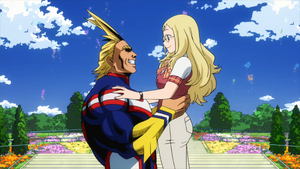 Melissa and All Might's reunion. 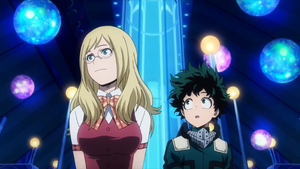 Melissa gives Izuku a tour around the I-Expo. 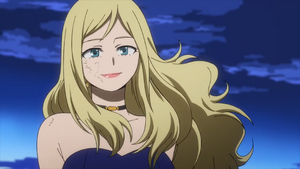 Melissa Shield is a hero.