Helping others.
Spending time with Dori, Phaedra, Liana, and Alexa.

Save Dori, Phaedra, and the Diamond Castle from Lydia.
Became an official Muse herself.

Melody is a supporting character in Barbie & The Diamond Castle. While she initially studied under the three Muses of Music as their apprentice, she became an official Muse herself at the end of the film.

She is voiced by Maryke Hendrikse.

Melody was an apprentice of three music muse: Dori, Phaedra, and Lydia. She lives with them in the Diamond Castle and helps to take care of it while learning music and magical art. When Lydia turned against her friends, Dori and Phaedra hid their music instruments with the castle and gave the Melody key in case something bad happened. From her hidden place, Melody saw how Lydia turned Dori and Phaedra into stone statues as they are tried to reason with her, and quickly rushed to her life, only chased by Lydia's partner dragon, Slyder. In the last resort to escape Slyder, she used her whistle to magically hide herself in the mirror, but she lost her whistle in the process and was finally broken by Slyder, causing her to be trapped in the mirror. She was afraid to be found that she remained silent.

One day, Liana and Alexa, two best friends who were passionate about music and worked as sellers of flowers, met an old lady who looked hungry. Although they had their own needs, they kindly gave her lunch bread and jam, and she gratefully gave them a mirror. It turns out that this is the exact same mirror that Melody hides. The songs of Liana and Alexa are very beautiful, she can't reveal herself and join their songs. Unfortunately, when trying to find her, Slyder felt her singing and destroyed Liana and Alexa's cabin. Melody told Liana and Alexa what happened and they will help Melody find The Diamond Castle. Howevr, they are found it near the Seven Stones. Until in the mansion, the struggle between Liana and Alexa was because Alexa influenced the luxury she had never felt before, and in fact the owner of the mansion was influenced by Lydia's spells. Liana brings Melody and leaves Alexa in the mansion. Alexa threw away her friendship necklace.

Alexa was kidnapped by Lydia, but because she refused to tell Lydia where Liana and Melody were, Lydia would miss her and tell them where. Slyder brought Liana and Melody to Lydia, and Melody was forced to tell her what the key to Diamond Castle was. Lydia brought Melody, while Liana and Alexa almost fell into the canyon. Liana once again wore a necklace on Alexa's neck and Alexa was freed from the spell. In Seven Stones, Melody lied to Lydia because she didn't want to tell the real key. Liana and Alexa are come, Lydia uses her flute. Liana and Alexander are just under her spell. Lydia made a whirlpool and ordered them to jump into the whirlpool, but Liana took her flute. If the girls don't play the flute for her, Lydia threatens to break the mirror, but Melody broke herself. At the same time, Liana threw Lydia's flute into the whirlpool, and Lydia chased it. However, Melody tried to use it to make the vortex disappear, but this spell was counterproductive and she disappeared.

After Lydia and Slyder are defeated and her spells were broken. Dori and Phaedra have once again become a humans, returning to the Diamond Castle, and they are happy to reunite with the Melody. Dori and Phaedra called Liana and Alexa the music princess and promoted Melody as the new muse to replace Lydia. Melody asked them to stay there, but they refused and wanted to return to their home. When Liana and Alexa will return home, Melody bids farewell to them and says she will visit them.

Melody is a sweet, funny, friendly and caring girl. She is often shown to be friendly by almost immediately becoming best friends with Liana and Alexa. She is funny when Alexa says her stomach had been growling and Melody makes a joke, making them all laugh. Melody is caring when she saves Alexa's life. She is very sweet and at times shy but when Lydia scares her friends, she, still a bit afraid, tried to stand up to her. 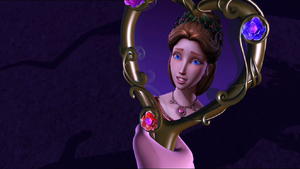 Melody talking to Liana and Alexa. 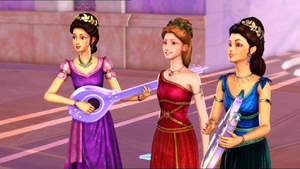 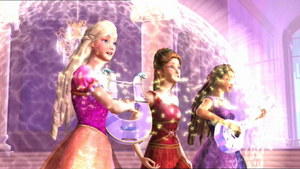 Liana, Melody and Alexa using their necklaces' and their instruments' magic. 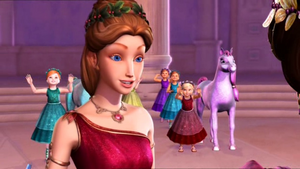 Retrieved from "https://hero.fandom.com/wiki/Melody_(Barbie)?oldid=1619493"
Community content is available under CC-BY-SA unless otherwise noted.