Mythical
Meloetta is a Mythical Pokémon first introduced in the fifth generation games Pokémon Black and White. The Pokémon is a Normal/Psychic-type in its Aria (or standard) Form, and a Normal/Fighting-type in its Pirouette Form.

Although Meloetta is stated to be initally genderless, it strongly resembles a female humanoid in both of its forms, similar to Gardevoir.

In its Aria Forme, Meloetta has white skin with a black "dress" around its torso. It has long flowing green hair with patterns resembling a measure in a musical composition. Several blue spots line its hair, which strongly bear a resemblance to whole notes. Meloetta's arms resemble the ends of quarter notes, while an accessory on its right ear resembles a treble clef or an earpiece for singers. Meloetta has large, blue eyes and a small jewel-like structure in the middle of its forehead.

In its Pirouette Forme, Meloetta's hair changes from green to red, and is styled into a high bun. In addition, its eyes and jewel also change to red and its "dress" becomes more elegant with four skirt separations rather than two in its Aria Forme.

Although initially genderless, Meloetta displays many properties similar to a female individual, both physically and socially. In its anime series counterpart, Meloetta is actually implied to be female, as it is shown to have a crush on Ash Ketchum, almost to the point that it is willing to be caught by Ash, and becomes protective of him when he gets in trouble.

Meloetta lived among Ridley's ancestors prior to the anime series setting. Much about the Pokémon was not known until the episodes centered around the being. It later befriended Ridley before eventually leaving him for some time.

Meloetta frequently followed Ash and his friends along their journeys, gradually growing attached to them and becoming pleased upon his victories it witnessed, and thus developed a crush on the male Trainer. Ash briefly caught several glimpses of Meloetta, but never fully understood its identity until much later.

In addition to following Ash, Team Rocket frequently pursued Meloetta in an attempt to capture it and use it for their evil schemes. One attempt shown in All for the Love of Meloetta! nearly succeeds, resulting in Meloetta accidentally getting hit by Cynthia's car. Cynthia and Ash (whom was traveling with her at the time), spotted this and quickly treated Meloetta.

For a short time, Meloetta traveled with Ash and his friends on their journey, during which Ash's Oshawott and Dawn's Piplup fell in love with the Pokémon and began fighting for its heart.

Eventually, Meloetta reunited with Ridley in Meloetta and the Undersea Temple! after the latter mistook the former for battling a Krookodile against its own will, and as a result attacked Ash and his friends. Despite the huge mistake, the reunion is short lived when Team Rocket attacks, kidnaps Meloetta, and captures and imprisons Ash and Pikachu.

In the following episode Unova Survival Crisis!, Giovanni begins his evil scheme in using the Reveal Glass to summon the Forces of Nature to take over the Unova region and attack Ash and his friends. Meloetta, after several unsuccessful previous attempts, calms the trio with its song and ultimately foiled Giovanni's plan, forcing him and the Team Rocket trio to retreat back to the Kanto region. Meloetta reunites with Ridley once more, and began living with him since then. 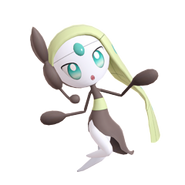 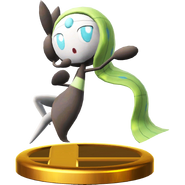 Meloetta trophy in Super Smash Bros. for Wii U