When Menasor met Megatron, he tricked him into helping him find the Cyber Planet Key and enslaving the universe. And Optimus Prime and his fellow Autobots found a spaceship called Lemuria, he and Megatron which later became Galvatron, attacked them. Metroplex fought him, and during the battle, Drill Bit protected Metroplex as he tried to defeat Metroplex. And his Mini-Con partner Heavy Load helped Drill Bit protect Metroplex. And then he and Metroplex reconciled and forgiven each other. And when Galvatron stole the Omega Lock, he and his friends were able to stop him with Vector Prime's help. And when the black hole and Kenny were destroyed, he joined the space bridge construction team with all the Transformers involved with the Altantis. 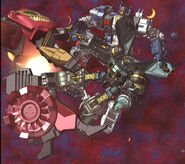 Menasor and Metroplex vs. Ransack

Menasor and Metroplex agree on their differences.

Add a photo to this gallery
Retrieved from "https://hero.fandom.com/wiki/Menasor?oldid=1737334"
Community content is available under CC-BY-SA unless otherwise noted.