Mepple is the chosen protector of the Princess of Hope, Mipple. Because of this, he and Mipple have a "lovey-dovey" relationship. Both Mipple and Mepple can only stay in their Garden of Light forms for a short time before they grow tired, so they take energy-saving forms resembling cellphones, also called Card Communes in the English dub. He ends his sentences with "-mepo" in the original version, which is omitted from the dub.

His theme color is yellow while his sub color is light blue. His eyes are dark blue and he has a star shape at the end of his tail.

Mepple is very arrogant because of his status as a chosen warrior. Because of this, he always expects the best of everything and to be respected by others. Due to how he often criticizes or taunts Nagisa, the two of them argue a lot while he feels no regret. Due to both having a temper and stubborn personalities, they instantly deny any accusations that they are like each others.

Despite this, when he is with Mipple he is a much gentler person and loves her very much. He never demands things from her, and always hugs/cuddles with her when they can see each other. This makes him mildly jealous of Pollun due to their close past, and often wishes that he'd be less selfish. Though he is just as selfish, usually whining about being hungry, or just acting too lazy to do anything. He even has said Nagisa is very easy to manipulate. 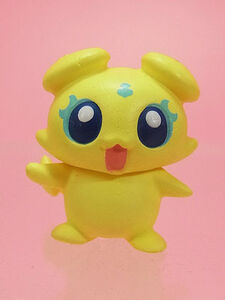 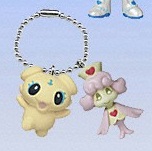 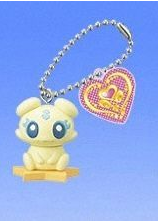