Mera is a fictional character and superheroine appearing in American comic books published by DC Comics, appearing as one of the major characters of the Aquaman comics.

Created by Jack Miller and Nick Cardy, the character first appeared in Aquaman #11 (September 1963) as a queen of the sea. Mera was ranked 81st in Comics Buyer's Guide's "100 Sexiest Women in Comics" list.

Mera of Xebel is an Atlantean and famous love interest and wife of Aquaman. She hails from the penal colony of Xebel in the Bermuda Triangle of Atlantean exiles and was tasked with the mission to kill the King of Atlantis before she abandoned her quest when she met and fell in love with Aquaman. Mera has been at Aquaman's side ever since proving to be his most valuable partner in battle and in life.

The first major development which occurred to Mera was the death of their child Arthur Curry Jr, who was murdered by Black Manta. Mera began to resent that the father was not by the son when he died (as the son died a short time later while they tried to save his life.)

The two eventually came to a violent confrontation in which Aquaman assumed that Mera had died, but it was later revealed that Thantos had brainwashed her. She was held in a hellish dimension known as the Netherworld. She was eventually freed by her husband. The two remained estranged and she even ruled as Queen during his exile. Arthur had also begun a relationship with Dolphin for a time, but he would eventually reunite with Mera.

Atlantis was sent back in time by Tempestduring the Imperiex War. It was later restored with the help of the Justice League of America. She later showed up shortly before Aquaman’s death in One Year Later . After these events she regained her full abilities and formed a rebel army with the new Aquaman with the goal of rebuilding Atlantis after its destruction at the hands of the Spectre. During Blackest Night, a group of Atlanteans including Mera attempt to retrieve the body of Aquaman to return it to the royal tomb. She is shocked to discover he has been returned to life as a Black Lantern, and was later joined by Dolphin and Tula(Aquagirl.) In the end the remainder of the Atlanteans are killed and Garth is brought back as a Black Lantern as well. Black Lantern Aquaman tempts her with their deceased child but she flees and joins forces with the Atom and the Flash. She is eventually deputized as a Red Lantern, which increased her power substantially. When Arthur was subsequently revived, her red ring separated itself from her, leaving her in cardiac arrest, but Saint Walker and Carol Ferris were able to save her.

During the events of Brightest Day the two of them rekindle their love and the two began to work together, notably saving a group of children from abduction, but they are confused as Aquaman can summon zombie version of marine wildlife. Soon after she is forced to reveal to Aquaman her true history, that she was originally sent to kill him.

Mera possesses considerable superhuman strength (carrying capacity of at least 70 tons). She has been shown as strong enough to lift an entire section of an Atlantean ship with dozens of people still attached to it. She can easily leap hundreds of yards, and effortlessly rip through metal barriers.

Mera can swim much faster than normal Atlanteans or Xebelians. Her swimming is boosted by her advanced level of water manipulation. She is on Aquaman's level, which would make her one of the fastest swimmers in the DC universe, and able to 'cruise' through the water at a rate of at least 300mph. Her top speed is still unknown.

Earlier stories placed some limits on Mera's abilities, such as susceptibility to lead. However, her main weakness was her struggle with mental insanity, made more apparent after A.J.'s death. Once suspected to be the lingering effect of the psychotic breakdown suffered for the loss of her only son, with Mera blaming Arthur for his shortcomings.

As a Red Lantern, removing her power ring causes her cardiac arrest. 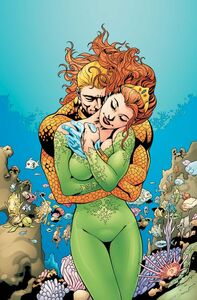 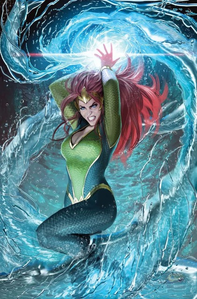 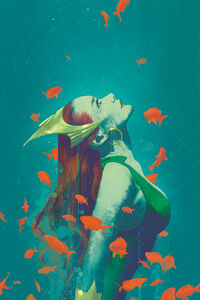 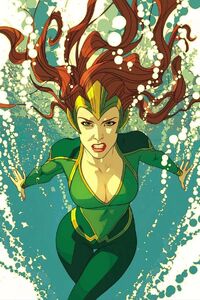 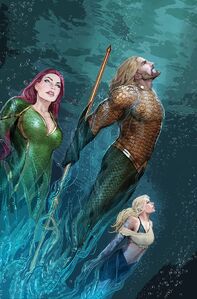 Mera with Aquaman and Dolphin.

Mera as a Red Lanten. 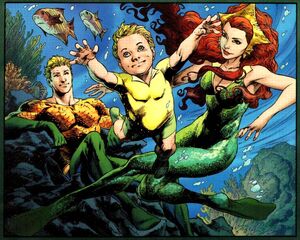 Mera and Aquaman with their son, Arthur Curry, Jr. 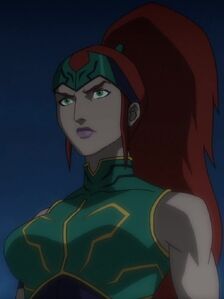 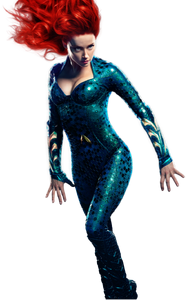 Amber Heard as Mera in the DC Extended Universe.