Heroes Wiki
Register
Don't have an account?
Sign In
Advertisement
in: Articles under construction, Dragons, Video Game Heroes,
and 16 more

Mercury is one of the six Greatwyrms and the she is the waterwyrm. She starts out as Emile's dragon before turning good due to his villainy. Later, she joins Euden on his quest.

She was voiced by Kikuko Inoue in the Japanese version, and by Alison Wandzura who latter voiced Elisanne and Vanessa in the English version.

She is a blue-colored dragon with pink horns and claws.

In her high form, her claws become the same color as her scales and her horns become dark blue.

In her humanoid form, she has long blue hair with pink tips, and her horns are slightly shorter.

In her normal form, her Hydrocannon attack can deal 616% of water damage to enemies caught in its line of fire. If her user is water-attuned, she can increase their HP by 20%.

In her high form, her Aqua Spiral attack dishes out 6 150% hits of water damage to

surrounding foes, drags them towards the user and has the bog status inflicted on them for 8 seconds with a base chance of 180%.

She made a pact with Emile because he promised to use his wealth to protect her ocean. She breaks the pact after finding it out to be a ruse. 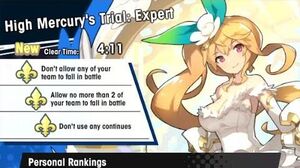