Rid Nirn of of all the undead, Dethrone Molag-Bal

Meridia is the Daedric Prince of Life and Lady of Infinite Energies in the Elder Scrolls series. She is a very mysterious deity that usually does not give much information to mortals. She can be summoned on the 13th of Morning Star, or by offering a shrine of hers a corpse sample.

Originally in the time before Daedra were Princes, before the Nine Divines came into being, and it is said before time was time, There existed the God Lorkhan. Lorkhan charged his creations the et'Ada with the task of creation of the mortal realms and perceptible reality. Lorkhan's head et'Ada was the god of magic, Magnus. Magnus was the architect of reality and through his work the cosmos was reshaped to a place of physical laws but boundless potential. Magnus was however burdened by the concept of reality, for he had put such effort into it that he could not bare to see it end, which he knew it would as the laws he had to establish upon reality dictated that all things must end. Magnus and the other et'Ada, choose to leave creation rather than be tethered to it and watch as it's eternity eventually withered away, and so they left, tearing holes in the sky as they went, these holes are said to be the stars in the skies. The sun was the patch of sky torn away when Magnus himself left. There were those among the et'Ada that could not bare to leave creation and so instead choose to give up the scope of eternity to stay behind and watch over the cosmos, such beings are called Magna-Ge, "Children of Magnus".

Most Magna-Ge remain as unseen guardians existing on the edge of Aetherius, the realm of magic, and Nirn, the mortal world, Atherius is very much the games' in-universe equivalent of heaven. However one of the Magna-Ge emerged from Artherius, onto the material world as a constant, Meridia. Different accounts assign different reasons for Meridia's appearance rather than remaining a hands-off observer with the other Magna-Ge, one book claims Meridia carried on an affair with one of the Divines and was cast out of Artherius for the scandal, other stories claim she left of her own accord, not content to simply watch or guide mortals but to physically move about in their world. Whatever the truth, Meridia fell from her angel-like station and instead took on the mantle of Daedric Prince. Meridia carved out a plane of Oblivion for herself and titled it, The Colored Rooms, a plane of such colors that some of them can not be comprehended and radiate as light that would blind mortals. Meridia is considered the Daedric Prince of Light, Spirit and Death. Meridia specifically concerns herself with death as she feels it should be unsoiled and despises the undead and necromancy.

Meridia's profound hatred for the undead also makes her consider her fellow Daedric Prince Molag Bal, her immortal enemy, for in addition to his destructive nature he also created vampires, an act that Meridia considered deserving of her ceaseless ire. It is unclear if Meridia actually claims the souls of the dead or she merely shepherds them to their after-life. The clergy of the Divine of Death, Arkay, consider her a heretical false god, but one who is allied with protecting their god's best interests. While all Daedric Princes are considered beyond the concepts of one solid mortality, Meridia is still considered one of the few reliably "good" Daedric Princes, how she exercises that "good" varies rapidly from gentleness to fanatical violence and scorn.

She is best known for her extreme loathing of the undead and necromancers. Because of the problems these considerably evil entities cause with her life-giving duties, she wishes to eradicate them off the face of Nirn. Alongside Azura, she is one of the very few Daedric Princes that are not considered evil, although her hatred to undead applies to good vampires such as Serana as well. Meridia offers what she calls "Purification" to her followers, where the flaws that are mortality are corrected, the "Purified" do not age, are immune to disease, flow with holy energies, and have any evil in their hearts wiped away, however, this also results in a lose of free-will. As far as Meridia is concerned as free-will can lead to evil, it is clearly flawed. Meridia does not see "Purification" as a punishment, so she only bestows it on those she sees as worthy and even then, only if the request/accept said blessing.

In Oblivion, she asked the Hero of Kvatch to travel to a cave a slay a necromancer and his army of undead. In doing so, the hero will be rewarded with her artifact, the Ring of Khajiiti. In the expansion Knights of the Nine, it is revealed an ancient Ayleid (ancient pre-curors to High-Elves) king named Umaril the Unfettered has risen from the dead to purge Cyradiil of all life an re-establish the Ayleid empire. Umaril was made unkillable by any mortal or divine in existence back during the rule of the Ayleids by Meridia, whom the Ayleid's worshiped. Meridia made Umaril unkillable by any of the divines in existence at the time of the pact, but as between then and Umaril's return a ninth divine - Talos, had ascended, her blessing would not keep Umaril alive if struck down with the power of all the nine divines, prompting the Hero of Kvatch to become a crusader sanctified by all nine divines to work around Meridia's immortality. Meridia is not seen during the events of the Knights of the Nine, however Umaril's men bear a striking resemblance to Merdia's Auriel soldiers - by then lost in a bet with Sheogorath. No indication is given why Umaril earned Meridia's favor. The only thing it states for certain is Meridia's blessings are not solely earned by those with good hearts. As she does not appear or interfere in the quest line, Meridia seems to treat Umaril less as loyal representative and more as just an obligation.

In Skyrim, she will task the Dovahkiin to go and search for her beacon, once they find it, she will then tell them to return to her shrine outside of Solitude and place it in the pedestal at the base of the statue there. Next, she will instruct them to go inside the nearby temple and slay a necromancer that preformed undead rituals there, and cast the light into the temple to cleanse it of its dark energy. After the Dragonborn succeeds, Meridia will thank them for their services and reward them with the exclusive and powerful sword Dawnbreaker.

In Elder Scrolls: Online, Meridia offers the heroes sanctuary in The Hollow City, when they go to the realm of Coldharbor to confront Molag-Bal and reclaim ownership of their souls. Coldharbor is a realm of twisting rock, blue pyres, wailing souls, chains, lost souls, monsters and torture devices; Yet in the middle of the twisted landscape a city of trees, grass daylight and well maintained structures exists in spite of the otherwise hellish realm, This is The Hollow City, made by Meridia as aid to any who would fight her hated brethren. Once defeating Molag-Bal, Meridia herself will come with the player's soul to restore it after salvaging it from Molag-Bal's collection during the fight. Meridia has a deep hatred of Molag-Bal and while she is glad to help anyone reclaim ownership of their soul she is mostly acting out of spite towards Molag-Bal for creating vampires. 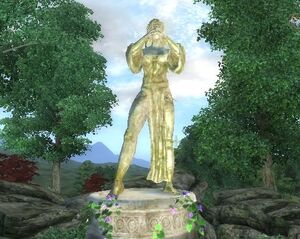 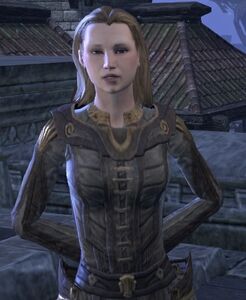