Save Oceana from her aunt Eris and evil threats.

Aquatic Monarch
Merliah Summers is the main protagonist in Barbie in A Mermaid Tale series. She is a surfer from Malibu and a half-mermaid princess of Oceana. Merliah was born to Queen Calissa and Rip. She is the granddaughter of Break and also niece of Eris.

Barbie in a Mermaid Tale

Merliah is born half-human and half-mermaid. She was born in Oceana, an underwater kingdom, ruled by her mother Queen Calissa, but her father was just a usual human. When she was just a little baby, her mother gave her to Rip's father, Break, because she was born with legs and couldn't live in Oceana.

When growing up, Break thought Merliah couldn't handle the facts. He had told her that her parents died when she was a baby. She grew up as "super-surf champion". She also has two friends named Fallon and Hadley, and the trio loved to surf and Merliah was one of the competitors of the team Malibu. She is always won every surfing competition, and that's why she is nicknamed the Queen of The Waves. It was here that she even had no idea about her origins and thought that she was a normal teenager, when she was really a mermaid princess and the daughter of the Pacific ocean's queen.

Barbie in a Mermaid Tale 2

One day, when she was in a surfing contest, her hair unexpectedly turned pink and she was able to breath underwater, and she was surprised to hear a pink, sparkly dolphin named Zuma talking. When she got home, Break told her the truth about her past, but she cannot believe it. But Zuma tells her that everything Break told her was true, she yanks off the magical necklace given to her as a baby, it was revealed that her mother was alive. So she comes with Zuma to Oceana, but just to see her mother to change her back to just a "normal" girl. Over the course of her adventure, however, she starts to accept her mermaid half. Merliah learns that, what makes you different may be your greatest strength.

In Oceana, the residents were celebrating Merliah's one-year anniversary of her arrival to Oceana. In the human world, with support from Break, Hadley and Fallon, Merliah was competing in the annual Surf Invitational at Laguna Beach. Merliah and her biggest surfing rival, Kylie Morgan from Australia, were very competitive with each other. In the competition, Fallon came third place, Kylie was second, and Merliah was first. The next part of the competition would see Kylie, Merliah, Fallon and their friends going to the World Championship Surf Invitational in Australia. Snouts came to see Merliah, so she went with him to tell her mother about the surf meet.

Calissa has showed Merliah her see shell, and Merliah watched her mother's memories of her first Changing of the Tides Ceremony. Calissa explained that to make merillia, a mermaid in the royal family had to sit on a throne in the city of Aquellia. Then, they must recite an ancient rite. At mid-day, they would be able to make merillia. Calissa wanted Merliah to see the ceremony, but Merliah is often considered the World Championship Surf Invitational to be more important. After an argument, with Merliah refusing to go to the ceremony, she left her mother, who was heartbroken.

In Australia, Kylie won the first round of the World Championship Surf Invitational. However, at one point she kicked Merliah off of her surfboard, and it caused Merliah to do a handstand while she surfed. When they returned to the shore, everyone ignored Kylie, even though she won the first place and Merliah won the second place. A group of people went to interview Merliah about her handstand, and she was even picked to be a model for a surf gear company by its founder, Georgie Majors. Their first photo shoot took place that night at a luau. While Merliah was modelling, she had to take off her magic necklace because it wasn't made by Wavecrest. She gave it to Hadley to keep safe.

Meanwhile, Kylie was told by Alistair, an evil fish, that Merliah's necklace gave her a magical advantage. Kylie decided to listen to him and stole the necklace while Hadley was busy eating. Kylie used it to became a mermaid and went to the bottom of the deepest trench of the ocean with Alistair, while Merliah, Hadley and Fallon looked for her necklace. In the ocean, Snouts witnessed Kylie being trapped in Eris' whirlpool by Alistair. With Kylie inside, Eris was freed. Snouts went to Merliah, who was still looking for her necklace hours later. Merliah could sense that the ocean was in danger, so she followed Snouts to the whirlpool, hoping she would be back in time for the final part of the surf competition.

However, Merliah tied a plant around her waist and went into the whirlpool that Kylie was in. Kylie was freed, but the current of the whirlpool was so strong and the plant tied around Merliah wasn't strong enough to pull her out. Kylie and Snouts was surely helped her to climb out, and the whirlpool disappeared. Kylie told Merliah that Eris had gotten out of the whirlpool. Merliah explained to Kylie that Eris is her aunt, and she would have to stay in the Oceana to stop Eris, so Kylie apologized to Merliah for steal her necklace and tries to give it back to her, but her mermaid tail turned into legs and Kylie loses the ability to breathe underwater, and Merliah decided give her necklace to Kylie to prevent her from drowning and Kylie decided to stay and help.

Queen Calissa was at Aquellia preparing for the Changing of the Tides Ceremony with mermaid ambassadors from different oceans. Eris found them and made their worst nightmares come true, so Calissa could no longer swim, and she sunk to the bottom of the ocean. Merliah could sense that her mother was in trouble, and met up with Zuma. They found Calissa, and Merliah and her mother apologized for their misunderstanding. Merliah, Zuma, Kylie and Snouts were unable to lift Calissa from the ocean floor even when working together. Merliah decided she would sit on the throne in Aquellia instead of Calissa, and lose her legs forever to save her mother and Oceana. In Aquellia, Merliah and her friends got past Eris’ henchmen, large evil fish named Stargazers, and saved the ambassadors.

After getting Eris away from the throne, Merliah sat on it and recited the rite for the Changing of the Tides Ceremony. Unfortunately, because she had no tail due to Kylie having her necklace, nothing happened. Kylie stopped Eris from hurting Merliah and gave Merliah back her necklace. She quickly became a mermaid again and was able to reflect one of Eris’ nightmare spells back at her. Once the ceremony was performed, Queen Calissa and the ambassadors’ nightmares were gone. Merliah gave Kylie the necklace to wear so she could breathe underwater. Alistair pretends he wasn’t working with Eris at all, so one of the ambassadors considers making him a pet. Everyone notices Eris, who’s worst nightmare came true: she had legs, and would have them forever. While Eris is locked away somewhere secure by the ambassadors, and they left. Merliah felt sad that she would never be able to surf again, but she was supportive of Kylie anyway. They went back up the surface to watch Kylie compete. Kylie wanted to give Merliah back her necklace, but Calissa and Merliah decided she should keep it because she helped to save the ocean.

However, Merliah has told her mother she wished that she was could be still change back so she could show a new trick to Kylie. Suddenly, with just those words, Merliah was able to become a human again. Merliah was overjoyed and Calissa told her that, because the ritual at the ceremony transforms a mermaid into her fullest self, Merliah’s fullest self was clearly both human and mermaid. Merliah got to surf in the final stage of the competition, but because she was able to make Merillia, she became distracted and lost to Kylie. When Kylie was being rewarded, Georgie Majors offered to make her a surf gear model beside Merliah. Kylie decided to share her trophy with Merliah, because she felt that it was special to be a part of something big. They held up the trophy together, and were cheered on by the hundreds of people in the crowd.

Princess Merliah is competitive, proud, and brave. She was loves to surf more than anything, and sometimes puts her own desires and wants over the needs of others—but she always does the right thing in the end. Although she has come to embrace her mermaid heritage, she loves to spend time with her friends above and below the waves. 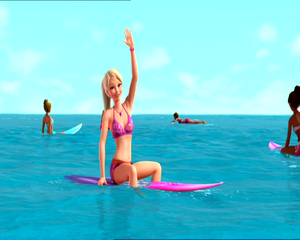 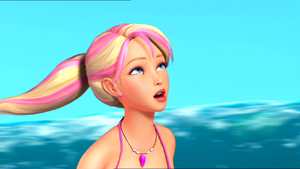 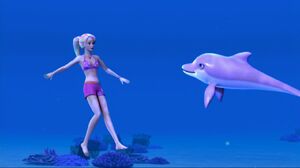 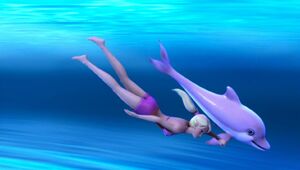 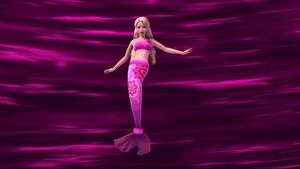 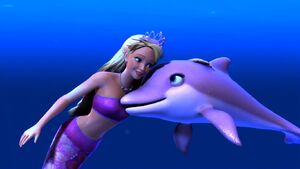 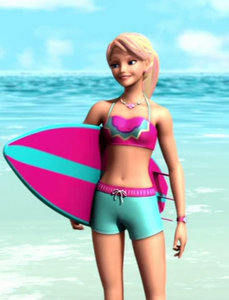 Retrieved from "https://hero.fandom.com/wiki/Merliah_Summers?oldid=1763247"
Community content is available under CC-BY-SA unless otherwise noted.