Merlin, also known as Emrys, is the titular protagonist from the BBC series Merlin. He is a warlock who faces many challenges as he journeys with the young adult prince Arthur Pendragon to keep the prince safe as he moves toward for the crown of Camelot.

He is portrayed by Colin Morgan.

Merlin was born in Ealdor, a small village on the outlying region of King Cenred's kingdom, to his mother, Hunith. Hunith and Merlin's father, Balinor, fell in love but had to flee from Camelot with the assistance of Gaius, the court physician, when the king, Uther Pendragon, persecuted those with magic. Balinor and Hunith lived in Ealdor for a time until Uther discovered Balinor's location and sent knights after him, causing him to flee into the wilderness alone. He was not aware of Hunith's pregnancy when he left and she gave birth to Merlin and raised him alone. Merlin had no knowledge of his father until he and Arthur were sent to find the Last Dragonlord, who was named Balinor, to assist with the Great Dragon situation. Hunith sent Merlin to Gaius, the court physician in Camelot, when he turned eighteen in the hopes that Gaius could help Merlin learn how to control his magic.

Merlin makes his way into Camelot and finds the court physician's chambers and surprises Gaius, who falls from a high place, leading Merlin to use magic to slow time down and move a bed for Gaius to land on. Merlin stays with Gaius and has a couple of run-ins with Arthur, whom he does not recognize. Arthur appears to be intrigued by Merlin's lack of respect. A woman seeking revenge for Uther's killing of her son for practicing magic targets Arthur and Merlin steps in and saves him. Uther then makes Merlin Arthur's servant in gratitude, which sets up the rest of the series.

Merlin and Arthur go on many adventures, most of which result in Merlin saving Arthur from peril by secretly using his magic. Merlin talks to the Great Dragon and learns about his destiny to help Arthur become king and unite the land, allowing magic to come back. The dragon also provides advice to Merlin on individual events when asked.

His magic is kept a secret from everyone except Gaius, because magic is outlawed in the kingdom on pain of death sentence. This causes Merlin to sneak around quite often while trying to stop those who would harm Arthur or anyone else Merlin cares about.

Merlin is portrayed as being selfless, heroic, protective, honourable, noble, brave, modest, empathetic, kind, caring, optimistic, compassionate, intelligent, and wise. In the beginning, he is also seen to be rather naive and idealistic. He shows exceptional talent and potential in his magical abilities and his enthusiasm to further his education despite the risks carried with using magic. He can be outspoken and slightly foolish, as with his first meeting with Arthur. He does at times use his magical abilities for himself, as when he fought Arthur in the market place and to soften his workload. However, as Merlin gets older, he uses his abilities rarely for himself and mostly for the benifit of others. He also has a very good, quirky sense of humour, enduring Arthur's frequent teasing and frequently engaging in verbal sparring with him; he was capable of coming up with insults on the spot, notably calling Arthur a clotpole on more than one occasion and when Arthur asked him to describe it, Merlin claimed that Arthur was the description of the word. Occasionally Merlin's humour is portrayed as dry or sarcastic, especially when he is in disguise as Dragoon the Great. Although Arthur constantly told Merlin that he was an idiot, Merlin was more intelligent than he appeared, as noted by Gaius. He also developed some of his mentors cunning, as shown when he frightened Morgana in order to send her to her bed in the disguise of Dragoon. This allowed him to block her magic before Arthur confronted her in Camelot.

Merlin used to be impulsive, reckless and naive: he appeared completely oblivious and unaware that Gwen had romantic feelings for him (or didn't feel the same way), telling anyone who asks that they were just friends. He is also very selfless; when Gwen is sentenced to death for witchcraft he confesses that it was him who cured Gwen's father with magic, despite the fact it would have cost him his life. Also, after he had been poisoned by Nimueh, he sent a light to guide Arthur out of the caves beyond the Forest of Balorand advised him not to take the Mortaeus flower despite the fact that without it he would die. He later offered to give his life in return for Arthur's on several occasions. This selfless nature often impairs his equally strong sense of duty; more than once he has put his life on the line to save a loved one even though his survival is imperative to the future of Albion, as manifested also by his attempt to save Gwen from execution by admitting the truth that he had been the one to use magic to heal Gwen's father. Merlin is very concerned with fairness. He does not want anyone else to suffer punishment for his own actions. Merlin becomes guilt-ridden whenever somebody else takes the blame, either knowingly or ignorantly, for something Merlin himself did, as Gwen and Gaius both did, and becomes determined to clear the name of the innocent individual no matter what it takes to do so.

Kilgharrah also noted that Merlin had a habit of attempting to see good in everyone and warned him that this could prove to be his undoing. Even after Morgana turned against Camelot, Merlin pleaded with her not to help bring down the kingdom, pointing out that there were innocent people living there. He also tried to make Morgana realize that people did care about her and that she was being selfish and evil, because she was working against the very people that cared for her.

Merlin's time in Camelot has made him very wise and Arthur has noted his wisdom on several occasions. Most of the time, however, Arthur states he was an "idiot," loyal and good-hearted, but foolish, overprotective, and sometimes weak. Merlin's wisdom was also shown when he guided a sorcerer named Gilli to prevent him from killing Uther. Merlin often called Arthur names that most servants would never call a prince such as "Dollop Head", "Clotpole", or "Prat", showing that he was unafraid of insulting people of a higher class than himself and that considered Arthur as a person and not just a prince. He has also insulted Uther, calling him a "stupid, arrogant old tyrant", though it should be noted that he was disguised as an old man at the time and was thus unrecognisable. Merlin, also, has shown a keen sense of observation, being able to recognise Gwaine even while he was in armour because of his unusual fighting style.

Nonetheless, there was also a darker side to Merlin's personality. He will go to extreme measures to protect those he cared about, even if it meant killing enemies. Merlin has been forced to directly kill people an alarmingly high number of times in order to protect others, such as Mary Collins, Edwin Muirden, Sophia and her father Aulfric, Tauren's henchmen and Nimueh. He has also directly killed others while in combat, such as the Sidhe elder, another Sidhe  and Grunhilda. The most notable displays of Merlin's darker side were shown when he killed Nimueh because he believed she had killed Gaius, when he poisoned his close friend Morgana because he saw no other option to save Camelot, and when he killed Agravaine after the man discovered his magic. Merlin is normally indifferent towards those he killed and he has rarely showed remorse, although poisoning Morgana was an exception because she was once his close friend. In addition to killing people, Merlin sometimes showed a cold, cruel, and sadistic demeanor towards his enemies, such as when he used a snake to scare Morgana's horse, and when he disabled her powers while overthrowing her. However, Merlin's brutality is only ever directed at his enemies and he has never harmed anyone who wasn't a threat, occasionally trying to talk to them and convince them to change prior to turning his brutality onto them if he was unable to peacefully persuade them to abandon their dark path. This darker side of his personality is probably part of the reason that so many people fear Emrys, as Merlin is often known by other magical beings.

Later in his life, Merlin was also shown to be a hypocrite since he automatically thought Mordred was up to no good simply because Mordred was trying to protect someone he cared about. Gaius noted that if Merlin was in Mordred's position, he would do exactly the same thing. Mordred attempted to smuggle his love interest, Kara, out of Camelot but Merlin told Arthur despite the fact that he had intended to do exactly the same thing with his own lover Freya several years earlier. 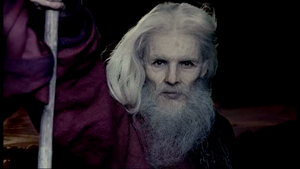 Add a photo to this gallery
Retrieved from "https://hero.fandom.com/wiki/Merlin_(BBC_Series)?oldid=1648808"
Community content is available under CC-BY-SA unless otherwise noted.