Saves the world from the evil threat

Hamish Mycroft, also known as Merlin, is the tritagonist in the Kingsman film series. He is portrayed by Mark Strong.

In 1997, Merlin along with Galahad was on a training mission in the Middle East with Kingsman candidates Lee Unwin and James Spencer. While they were holding a soldier captive for information, he pulled a grenade pin and Lee sacrificed himself by jumping onto the soldier, covering the explosion, and saving his surrounding team.

17 years later, Merlin, Galahad and the other members of Kingsman were tasked with finding a replacement of Lancelot when Spencer was killed during a failed rescue mission of Professor Arnold in Argentina.

Merlin oversaw the training of the candidates so that one of them might become Lancelot. The tests included filling the sleeping quarters of the trainees with water and seeing their reaction (after which he praised Roxy and Charlie for their quick thinking and Eggsy for being able to deal with it, though chastised all the candidates for not working together), a written test, a sky diving test and a test of faith to Kingsman. Through the training, only Eggsy and Roxy were left. As part of one of the tests, he sent Eggsy to see Arthur while Merlin himself had Roxy. Merlin told Roxy to shoot her dog, which she did (though it was revealed the bullets were actually blank as part of one of the tests) and got her the position of Lancelot.

Merlin then witnessed Harry going undercover at the South Glade Mission Church and was shocked when the latter began killing the people in the church and then was killed by Valentine. After Eggsy told Merlin and Roxy about texts Arthur (who had sided with Valentine) was getting, he and Eggsy headed to Valentine's headquarters via a Kingsman Jet while Roxy took out one of Valentine's satellites. Merlin tried to hack into Valentine's systems, only to find that Valentine had a biometric scanner. After he got Eggsy away from Valentine's guards and then equipped Eggsy to fight him, he and Merlin both ended up being surrounded by Valentine's forces. This led Merlin into activating all of the implants Valentine had put into his followers, causing their heads to explode. After Eggsy killed Valentine, Merlin saw him head to Princess Tilde's cell and get into bed with her.

After he directed Eggsy to a safe place where he was able to defeat Charlie's colleagues and then through a sewage pipe where Eggsy was forced to go through to turn up on time for a special thing he couldn't be late for, Merlin debriefed Eggsy and told him that Charlie had barely survived his implant being destroyed. Unlike every other agent except for Eggsy, Merlin wasn't killed when Kingsman was destroyed by the Golden Circle since he was a "mere staff". He and Eggsy then went wine shopping and began drinking in honour of the fallen Kingsman, which led him drunk and sobbing. Eggsy soon noticed the wine they were drinking was made in Kentucky which led them to a distillery and a secret base.

After Merlin tried to break into what he thought was the entrance to the base, the two were discovered by Agent Tequila, a member of Statesman , who questioned them. Eggsy tried to tell him the truth that they were from Kingsman, but Tequila refused to believe them and knocked them unconscious. Tequila later had the two tied up, interrogating them and accused them of pulling off a rescue mission and revealing Harry was still alive. After Ginger Ale revealed the two were telling the truth, Tequila apologised and welcomed them to Stateman. Merlin and Eggsy attempted to reunite with Harry, only to find him didn't remember them due to some amnesia.

Merlin later tried to work with Ginger to retrieve Harry's memories, only to be unsuccessful at first. After Eggsy was able to do so, Merlin reunited with Harry. He later went to a bar where he and Eggsy gave him some new gear and found that Harry was still dealing with some after affects of his memory being restored. After Eggsy informed that Whiskey had been shot by Harry, Merlin thought that it was also an after affect and tried to question him of his memory. When he, Harry and Eggsy led the final fight towards Poppy Adams, he equipped Eggsy with a weaponised brief case, Harry with a new weaponised umbrella and himself with a machete.

However, when invading Poppy Land, Eggsy accidentally stepped on one of Poppy's landmines. Merlin sprayed a canister which freezed the detonation temporarily. However, once Eggsy lifted his foot off the mine, Merlin suddenly stepped on it. The effect of the spray by that point was diminishing and the canister was empty. Merlin decided to sacrifice himself to save both Eggsy's and Hart's lives whilst killing a few of Poppy's guards, by singing his favourite song before stepping off the mine. 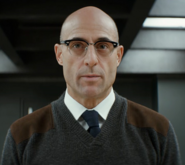