Heroes Wiki
Register
Don't have an account?
Sign In
Advertisement
in: Magic, Heroes from the Past, Elderly,
and 13 more

Embracing light.
Learning to control his magical powers.
Loving his one true love Veronica Gorloisen.
Protecting his friends from danger.
Learning to live a normal life.

To defeat Morgana le Fay with the help of the Prime Merlinean.

To be mortal again and live a normal life.
To forever be with his love Veronica Gorloisen.

Merlin is a legendary trepid wizard and a posthumous character in the 2010 Disney fantasy adventure film The Sorcerer's Apprentice.

He was portrayed by James A. Stephens.

Merlin was a great and powerful magician that worked as a servant within the old British kingdom of Camelot.

During his service in the kingdom, Merlin took in young individuals gifted with magic with whom he formed Merlineans. Among them were Balthazar Blake, Maxim Horvath, and Veronica Gorloisen. At the same time, he engaged in a magical conflict against his nemesis Morgana le Fay and her own legion of sorcerers called Morganians. As with Veronica, he had an unconfirmed history with Morgana through his hesitation in their final duel; it was implied that Morgana was in fact, his former apprentice as well as Balthazar, Veronica, and Horvath's senior. Merlin looked after Morgana with love and care just as Veronica looked up to her as a role model during her (Morgana)'s time as his apprentice. Unfortunately, their relationships became sour following her betrayal and subsequent conflict which would culminated to his death at her hands, and they became archenemies since then.

During what would be their last duel, Merlin managed to corner her and was about to reason with her for a final time. Unfortunately, Merlin was betrayed once again, this time by Horvath himself, and was later killed by Morgana le Fey. As he laid dying, Merlin gives his Dragon Ring to Balthazar. He also charges him to find the Prime Merlinean, the only one who could destroy Morgana.

Merlin made an appearance in flashback sequence of the prologue of the videogame adaptation of Disney's The Sorcerer's Apprentice on Nintendo DS. As in the film, he was killed by Morgana who eventually sealed by Balthazar in return. The difference is that Veronica was not involved in her capture (as her character was excluded in the game's storyline). 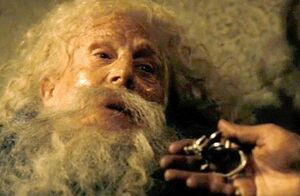 Merlin is only mentioned in the early script of the film as the founder of his legion of good sorcerer, referred with his full name "Merlin Ambrosius". Additionally, he is not Balthazar, Horvath, and Veronica's mentor as in the film as the mentor role was originally given to his modern-day successor Aurelius Flood.