Advisor to King Uther and then Arthur Pendragon

Magic
Merlin the Enchanter is a major figure in British folklore. He's a wizard, son of the devil whose powers and cunning he inherited.

Merlin was born of an evil father by order of Satan, who wanted to create an wicked Jesus, who would lead men to their ruin instead of saving them. His plan turns against him and Merlin devotes his life to fighting his father and guiding humanity. He leads Uther and then his son Arthur Pendragon on the throne, but also helps the emperor of Rome to discover his wife's infidelity. Depending on the version, Merlin is imprisoned by Viviane or Morgane in an air prison or in a tree.

Merlin's father was the Devil himself who, on the order of Satan, the prince of demons, mating a mortal. For this, having taken human form, he came to Earth and managed to make himself loved by a girl as naive as she was beautiful. Then he disappeared without a trace.

When she discovered that she was pregnant, she could not reveal the name of the child's father, because she did not know it herself: she was therefore sentenced to death, as the law required at that time.

While waiting for her delivery because the judges had decided to save the child who was innocent, the girl was thrown in prison. Finally the baby was born. The vigorous boy was named Merlin. But he was hairy to scare, so no nurse would breastfeed him. He was left to his unfortunate mother for some time, and then came the sinister day when the executioner wanted to carry out the sentence.

It was then that the first prodigy occurred: Merlin, who had hitherto emitted only vagurings quite normal for his age, spoke up and, in front of the audience and the astonished executioner, defended his mother with great eloquence. So much so that they both left prison some time later.

During seven years, Merlin grew up with his mother, where he revealed every day new prodigious talents such as the gift to predict the future. But his favorite game was to metamorphose in the blink of an eye under the amazed eyes of his playmates.

All this happened in Brittany the Blue, today called Great Britain, where Vortigern reigned, an ancient seneschal who had usurped power at the death of King Constant. To do so, he had to get rid of the two legitimate heirs to the throne, Constans and Uther Pendragon. He had managed to kill the eldest, Monk, but the youngest had escaped to take refuge on the continent.

Vortigern the usurper then lived in fear of Uther Pendragon's return and decided to build an impregnable tower to take refuge there in case of an alert. But, by curious spell, the building did not progress, because the tower collapsed as soon as it reached a certain height. Consulted, the diviners of the kingdom ordered to mix with the mortar the blood of a child born without a father and aged seven. Immediately, valets of arms went in search of such a child.

As they passed through a village, they heard two boys arguing violently, and one shouted at the other, "Born without a father, you're just born without a father!" It was, of course, Merlin who, having guessed Votigern's intentions, had arranged to be insulted in this way in front of his emissaries.

But, not to be killed immediately, he asked to be taken to the palace to make important revelations to the king. He learned to Vortigern that two dragons were lodged underground at the site of the future tower and that it collapsed with each of their movements.

Many, and the first diviners, laughed while listening to this child who claimed to know so much about the mystery of the tower. But the king ordered the ground to be dug, and to everyone's surprise two sleeping dragons, one red and the other white, were found there. Finally the dragon burned the red mortally, before succumbing to his wounds.

Then Merlin explained to the king the meaning of this symbolic fight, which prefigured a forthcoming confrontation between Vortigern and Uther Pendragon. Indeed, the latter arrived a few days later, obtained the rallying of the population and set fire to a fortress where Vortigern had taken refuge: the usurper, like the red dragon, perished in the flames.

Merlin also raised the future King Arthur, and secured his throne by a series of genius manipulations.

On two occasions he agreed to teach some of his magic secrets. Morgana, one of Arthur's sisters, became an evil fairy jealous of her sister-in-law, Queen Guinevere.

His second student was Viviane. Merlin loved to travel and from time to time he would disappear without explanation. In general he would take refuge in the hollow of the forests, frequented at that time by undines which had taken up residence near the sources.

Merlin's personality is twofold: he recalls, even at birth, the adult by his immense wisdom and maturity, and the child by his love of games, disguises and deceptions.

Merlin has a strong affinity with nature and animals, and often withdraws into the forest to meditate. It also shows some features of madness.

Merlin, by his diabolical paternal origin, is endowed with demonic powers like psychometry allowing him to know the totality of the past at his will. God also gave him, to counter the Devil, the power to see part of the future.

He is a very powerful wizard, capable of changing his appearance at will. He also has telekinesis, which allowed him to open a door with a hand gesture. Merlin, due to his affinity with nature and animals, is able to control the elements and animals at his will. By using spells he has demonstrated his ability to conjure, and put people to sleep or lock them away.

Finally Merlin is endowed with an almost infinite quantity of knowledge in particular as regards plants and magic. He is an extremely intelligent being and an incredible builder. 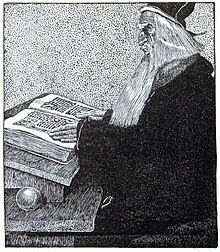 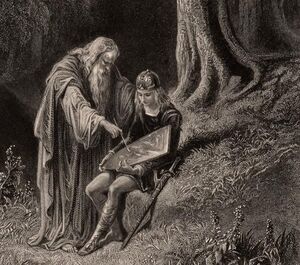 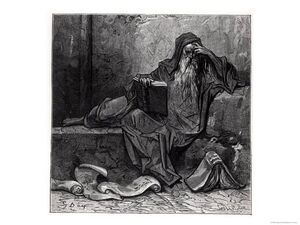