Aid Starfy on his adventures.

Healer Merfolk
The Mermaid is a recurring character in The Legendary Starfy game series from Nintendo. She lives a giant purple shell that save Starfy's progress in different areas during the game. She also has a collum in the DS game called Mermaid Gossip where she appeared in her chibi state giving hints on what Starfy should do.

She has pink hair, wears a pink top and pink bracelets, and has a light blue tail. Judging by her physical appearance she's most likely to be a teenage character.

In Densetsu no Stafy, Mermaid first meet Starfy in Lobber's cave, she help Starfy on his adventure. Mermaid can save the Starfy's progress and healing him by hitting her shell (pressing the X button in The Legendary Starfy).

In Super Smash Bros. Ultimate the Mermaid appears as a advanced support spirit that increases the user's water and ice attacks. Her spirit battle on the rocks at sea section of the Wuhu Island stage is against a pink female Inkling that heals over time.

Mermaid's artwork of Densetsu no Stafy. 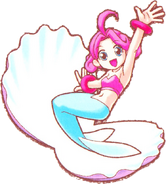 Mermaid's artwork of Densetsu no Starfy 4.