Member of the Princess Alliance

She is voiced by Vella Lovell.

Mermista is a dark-skinned young woman with a thick body and dark teal hair with a pattern that resembles an ocean wave (referencing her powers and kingdom). Her outfit consists of a large amount of teal and gold. She wears a teal tracksuit with dark scales resembling those of a mermaid's tail and a gold collar, gold and teal pauldrons, golden bracelets, golden ear cuffs, and gold and teal high-top sneakers.

Mermista is a sarcastic and blunt girl, and she keeps a stony face and a cool head most of the time. That doesn't mean she's emotionless; she just finds it hard to express her true feelings. She's stoic and has no problem speaking her mind, but often shies away from verbally expressing her feelings (particularly about Sea Hawk).

Mermista does not back away from hard work when she must complete it. As she bravely travelled the sewers of the Fright Zone in order to free Glimmer and Bow from the Horde's clutches. She can be very dramatic when she gets into the role, as best shown in Mer-Mysteries.

Despite this, Mermista has begun to develop a more proactive role in the later episodes, even taking up the leadership role for the rebellion during Adora's absence when the latter fainted after exhausting herself earlier.

Mermista is the ruler of the kingdom of Salineas; however, when her father retired he left her a kingdom that was crumbling. 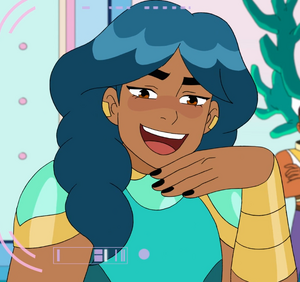 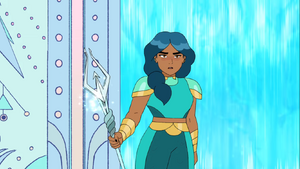 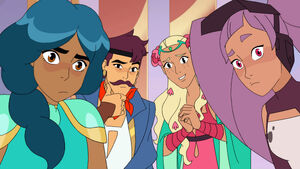 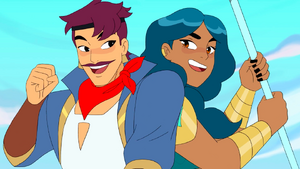