Heroes Wiki
Register
Don't have an account?
Sign In
Advertisement
in: One Piece Heroes, Female, Anime Heroes,
and 23 more

To protect her friends.

Mero is a minor character in Fish-Man Island Arc from the anime and manga series One Piece. She is a employee of the Mermaid Cafe and an smelt-whiting mermaid.

She was voiced by Skyler Davenport in English.

Mero has a long light blue flowing hair, yellow flower with brown up top from the right side in the each side, and light blue eyes. She has a purple reveals with dark purple and light purple pattern bikini. The fishtail is a pearl of blue with her color. She also has a pink lipstick.

Just like her the mermaid friends, She was very loyal, caring, kind, and loving fun with apparently. Mero also seen to be like Sanji and her rest of the friends.

As a skills dancer, she can using her breathing underwater, speaking of fish via sonar waves, and then she generally considering as a faster swimming at her world. Mero debuting to be as a mermaid.

Mero and her mermaid friends first debut at Mermaid Cove, arriving to the Straw Hat Pirates while Camie bring their for a visiting. However, she commenting will that doesn't appears from frighten. While the princes enter to the inquire able their crew's illegal arrived to the Fish-Man Island, her mermaid friends ignore their crew at there are we, hide to them. One day, while the crew's presence was made it as known by Sanji's nosebleed and Hammond's fight him, the three princes finally got clear will that their sample tries to serve Jinbe's texting to Monkey D. Luffy.

Overwise, the Straw Hat Pirates across the civil war to the New Fish-Man Pirates ending, she and her other mermaid friends are dancing in the Ryugu Palace banquet at honor on the Straw Hats' winning to saw them while they off departed at the new world.

Caribou's Kehihihihi in the New World

Therefore, the Straw Hat Pirates are left, she and the other mermaid friends attempted Caribou to kidnapped to witnessed helpful mermaids. 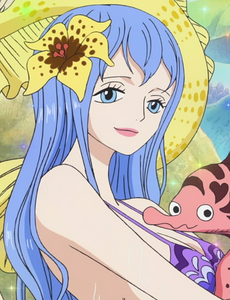 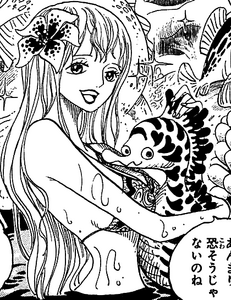 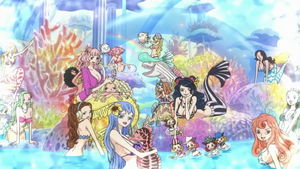 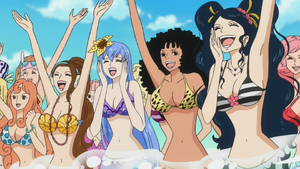 Mero and her friends saying goodbye to the Straw Hat Pirates.