Member of Mother Talzin's Nightsister Clan (formerly).
Member of the crew of the Stinger Mantis.

Take vengeance for her fallen sisters by eradicating the Jedi Order (abandoned).

Merrin was a Nightsister of Dathomir who survived her clan's extermination at the hands of General Grievous and the Separatist Military during the Clone Wars. While living alone in the ruins of her home, Merrin met the fallen Jedi Master Taron Malicos who manipulated her into believing the Jedi were responsible for the massacre of her people. As a result, Merrin swore vengeance against the Jedi and used her hatred to bury her pain.

A few years into the Imperial Era, a young Jedi named Cal Kestis came to Dathomir seeking an artefact that could help him find a Jedi holocron. Kestis was able to convince Merrin that Malicos had lied to him and that they shared similar trauma, as members of the Jedi Order had also been massacred to the point of extinction. Sister Merrin subsequently helped Kestis defeat Malicos, after which she joined his crew aboard the starship the "Stinger Mantis."

She is voiced and motion captured by Tina Ivlev.

Merrin was born on the planet Dathomir to unnamed parents, and became a member of the Nightsisters under the leadership of Mother Talzin. She was taught the mother's magick to rule the planet without being challenged, and to control the Nighbrothers. When she was young, she became friends with fellow Nightsister Ilyana, and believed that they would be together into adulthood. During the Clone Wars, Dathomir was attacked by the Separatist under the command of Count Dooku, who tasked General Grievous with destroying Talzin and her clan. Presumably being the only survivor of the massacre, Merrin buried her dead sisters and mourned their deaths.

Following Order 66, Merrin encountered the Jedi Taron Malicos, who survived the order and crash landed on Dathomir. Having become corrupted by the planet and disillusioned by his order, Malicos manipulated Merrin into teaching him Talzin's magick. During this time, Merrin was further manipulated by Malicos, who used her pain to make her believe the Jedi were behind the massacre. Wanting revenge against the Jedi, Merrin agreed to teach him magick so he could help her achieve her goals.

During the Imperial era, Merrin remained on Dathomir alongside Malicos, who had led the Nighbrothers astray after killing their leader Viscus. When Cal Kestis arrived to find the astrium, Merrin confronted him for his trespassing, and summoned Nightbrothers to kill him. Kestis continued on his quest before being confronted by Merrin once again, who resurrected her fallen sisters to finish him off. Merrin then watched Cal on his adventure until he met Malicos, who asked the Jedi to join him, much to her confusion. She confronted on his actions, and realizing his treachery, resurrected more of her sisters to kill them both. Cal was able to escape back on the Mantis, as Malicos retreated into Kujet's tomb.

Kestis soon returned after repairing his fallen master's lightsaber, and Merrin confronted him, learning from Cal that the Jedi were peace keepers and that Malicos has fallen. The two then shared their tragic pasts, and Merrin decided to work with him to deal with Malicos. She watched Cal fight Taron, and saved his life when he was nearly killed by the fallen Jedi. Upon his defeat, Merrin buried Malicos alive, thus ending the threat Taron was preparing. Following the battle, Merrin asked Cal if she could join the Mantis crew, and agreed to help him find the astrium since she realize that the Galactic Empire could attack Dathomir one day.

After obtaining the astrium, the Mantis crew returned to Bogano so Cal could retrieve the holocron, but he was confronted by the Second Sister. During the duel, the Second Sister stole the holocron from Kestis, who was unable to get after her due to relieving her memories. Returning to the Mantis, the crew then decided to head to Nurn's fortress to retrieve the holocron before the empire could train more inquisitors. Unable to get pass the empire's star destroyers, Merrin used her magick to cloak the Mantis to allow Cal and Cere to infiltrate the underwater facility. Cal and Cere were able to retrieve the holocron, but were attacked by Darth Vader during their escape. Merrin was able to save them and BD-1 when they near close to dying underwater, brining the Jedi back to the Mantis.

After escaping form the empire, Cal decided to destroy the holocron to prevent the likes of Darth Vader from torturing toe force-sensitive children to become inquisitors. 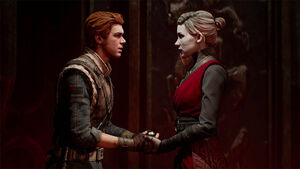 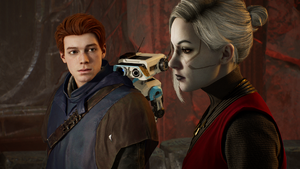