She was voiced by Debi Mae West (who also voiced Tsunade in Naruto and Boruto, Lucky in 101 Dalmatians, and Mrs. Brisby in The Secret of NIMH 2), Kyoko Terase in Japanese, and she was modeled after Eriko Hirata.

During a weapons testing exercise on Shadow Moses Island, Meryl joined FOXHOUND as an emergency replacement in 2005, after several soldiers had been reported missing. Following her arrival on the island, FOXHOUND and the Next-Generation Special Forces revolted against the U.S. government, took over the island's nuclear disposal facility, and stole Metal Gear REX, which had been developed in secret by ArmsTech.

Though initially believed to be an unfortunate coincidence, it was later revealed that the Pentagon had deliberately assigned her to Shadow Moses that same day in order to force Roy Campbell to withhold vital information from Snake during the events of the Shadow Moses Incident. Meryl refused to join in with the rebellion and was taken prisoner, placed in the adjacent holding cell to the DARPA Chief Donald Anderson. Before this, however, ArmsTech President Kenneth Baker gave Meryl a PAL card before undergoing a torture session by Revolver Ocelot. This PAL card could be used to activate or deactivate REX, and could only be used once.

After the DARPA Chief's death, Meryl's cell guard, Johnny Sasaki, unlocked her door after she began banging on it. Seeing an opportunity, Meryl quickly subdued him, and stole his uniform and Codec. Shortly thereafter, Meryl, disguised as a Genome Soldier, met up with Solid Snake, whom she initially mistook him for terrorist leader Liquid Snake, and also initially thought that he murdered the DARPA Chief. After both fended off an attack force of Genome Soldiers, Meryl ran to the nearby elevator, where her mind was taken over by Psycho Mantis of FOXHOUND. Firing her rifle, she kept Snake at bay, before escaping to another floor.

Meryl later used the stolen Codec to contact President Baker about her escape. Eventually Meryl and Snake began working together, after the latter learned of her Codec frequency. She managed to stay hidden by using her Genome Soldier disguise, and informed Snake of the facility's role as a WMD development lab, which he had previously believed to be a simple disposal facility. Meryl briefly blew her cover during a later conversation, and broke her Codec in the process of escaping, after Snake had contacted her regarding his rescue of Dr. Hal Emmerich.

Later, the pair met up on the first floor basement of the nuclear warhead storage building. She gave the PAL card to Snake and then the two headed to the commander's room where Mantis again took control of Meryl's mind. Meryl held her gun against Snake, but Snake, realizing she was not herself, managed to knock her out. Snake then dispatched Mantis and he and Meryl headed north in order to destroy Metal Gear.

Along the way, due to her brief possession by Mantis, she also knew which was the safe path for them to cross in regards to a Claymore-laden minefield. However, Meryl was shot and subsequently captured by FOXHOUND member Sniper Wolf. Snake pleaded with Meryl to hold on to life, and assured Campbell he would rescue her, and not for anyone else, but for himself. Snake engaged in a sniping duel with Wolf and was eventually lured into an ambush by her where he was also captured. Snake was then put through a series of torture sessions by Ocelot, who threatened to kill Meryl if he submitted to the torture. Snake held on throughout the torture for Meryl's life, and eventually escaped confinement.

Meryl was later brought on top of REX by Liquid while Snake was unconscious, although Liquid was unsure if she was still alive. Liquid then wired her to a nuclear bomb and fought Snake on top of REX. She was rescued by Snake after his fight with Liquid and the two embraced, but a Codec call from Otacon forced them to make a quick escape before bombs were dropped on the base. They found a jeep, however, during their escape, they were pursued by a relentless Liquid. Eventually, both jeeps collided on a cliff edge. Liquid would later die because of FOXDIE. Snake thought he would also die from the virus, but Meryl told him not to say it. The two discovered an abandoned snowmobile, and escaped Shadow Moses. After Campbell faked Snake and Meryl's deaths by saying that their jeep crashed into the ocean, Snake and Meryl retreated together, hoping for a normal life.

Meryl began to hate her father after he apparently wedded a young brunette, even going as far as to call him a "womanizing piece of shit." In 2014, she became involved in a secret operation devised by the Patriots to capture Liquid Ocelot, although she never knew about the Patriots using her during this time.

When she met Snake again for the first time during Liquid Ocelot's Insurrection, in the Middle East, she expressed shock upon looking at Snake's more aged appearance, and was clearly upset. She then became infuriated when she learned that it was Campbell who had sent him there. She was later upset when she discovered Snake's true mission in the Middle East was to assassinate Liquid Ocelot (he had earlier told her that he came to the Middle East as part of threat assessment), but she begrudgingly allowed him to continue on in the mission, because she was in no position to stop him.

However, before Snake could get the chance to kill Liquid, Liquid managed to activate the SOP system with "Liquid's" own DNA, causing a large amount of convulsions and uncontrolled releases of suppressed emotion from most of the Rat Patrol 01 team (barring Johnny), various members of the Middle Eastern militia and PMCs, and even Solid Snake (although to a far lesser degree). Her specific emotion was breaking down onto the ground and sobbing.

After recovering from the effects, she attempted to track down Liquid Ocelot after he left the Middle East. This, along with the fact that ARSOC was beginning to catch on in regards to Campbell's involvement in the events, resulted in her involvement with Snake's mission ending for the time being. During this time, she also filed a report to her superiors in regards to what happened in the Middle East, as well as writing up a threat assessment of Liquid Ocelot, which caused the President of the United States to finally realize just how much of a threat Liquid Ocelot actually was, and ordered a joint Army-Marine team led by Meryl to take Ocelot into custody.

Eventually, Snake and Meryl, along with her Rat Patrol 01 team, crossed paths again in Eastern Europe, redirecting Solid Snake from an ID checkpoint (essentially saving Snake, as he nearly blew his cover by attempting to do so), although they later got into an argument about their respective goals, especially with Solid Snake's doubts about it working, and also noticed that Meryl was behaving strangely. In an attempt to take Liquid by force, in Eastern Europe, she became involved in the massacre that wounded her and her unit, as well as killing most of the nearby U.S. military soldiers and damaging some of the vessels due to Liquid Ocelot taking away their control over SOP and gaining control over it himself.

Meryl helped Snake during his infiltration of Outer Haven. However, the catapult she was on when boarding Haven launched her at the wrong section of the ship, and during the process of landing, she sprained her ankle. Shortly thereafter, she was possessed by Screaming Mantis, echoing her similar predicament nine years before. Snake saved her from the mind control, and apologized, feeling he was at fault for dragging her into everything. She tearfully assured him they would "meet again on the other side," Snake then left to destroy Haven's AI.

After the mission, Meryl finally made peace with her father, and agreed to marry Johnny, who had loved her ever since he met her in Shadow Moses. 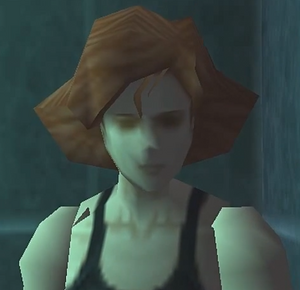 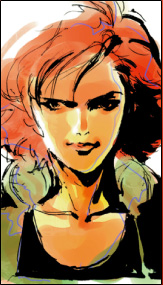 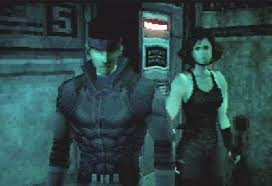 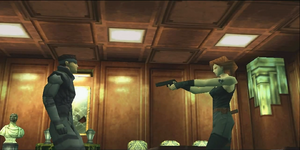 Meryl, under Mantis's control, points her gun at Snake. 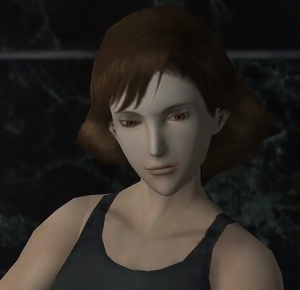 Meryl in The Twins Snake. 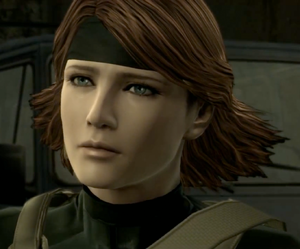 Meryl in Guns of the Patriots.