Agent for the Bernardelli Insurance Company

Meryl Stryfe is one of the two main heroines of the anime/manga series Trigun. She is an agent for the Bernadell Insurance Company and the partner and best friend of Milly Thompson. Unlike Milly, Meryl is hotheaded, strong-willed and rather distrusting towards protagonist Vash. Gradually, she comes to respect Vash and love him deeply, though in the anime her love is more romantic than in the manga. Her respect is partially due to the fact that she shares his pacifistic views. Meryl eventually forms a special bond with him that allows her to overcome the obstacles that she is faced with.

Initially, she finds Vash to be a nuisance and dismisses the idea that he is the legendary Humanoid Typhoon. As time passes, she realizes that Vash isn't thevillain that he is made out to be nor the buffoon that he presents himself to be.

Gradually, as the anime series progresses and she sees Vash get out of a variety of situations while displaying both a high level of skill and compassion, she comes to respect Vash. While at first chasing Vash is just her job, Meryl soon falls in love with him - although she has a hard time admitting it to anyone until the end of the series, least of all herself. Milly often encourages her to go after Vash, telling her that what she is doing is right, and advises her "not to hold back in matters of the heart."

Towards the later half the series, Meryl follows Vash out of her feelings for him more than her job. No matter how dangerous the situation, no matter how many times Vash tells them to stay away Meryl tries to follow Vash and Milly supports her- at least up until the point her life is seriously endangered, such as in Fifth Moon. Meryl also states once that she would not run away from Vash because of his scars and does not seem to be bothered by them.

Meryl constantly wonders why Vash gets into trouble when he does nothing wrong and worries about him as a result. One day, she is shocked to hear the truth and seems to understand this is something he has to solve alone.

Later in a turning point for the two in Live Through when the girls are taking care of him, Meryl expresses regret at following Vash, believing that he had to endure such emotional suffering (killing Legato to save their lives) because of them. For a time after Legato's death, Meryl takes care of a broken Vash by cooking, changing his bandages and sewing up his tattered red duster. One night while watching the stars together, Meryl tells him that he can stay there with them as long as he likes, and Vash agrees it may not be such a bad idea, which in turn makes Meryl happy.

The next day it is Meryl who protects Vash from angry villagers who find out that he is Vash the Stampede. He sees Rem in her words, and her physical appearance. He then realizes what he needs to do to Knives and hugs Meryl, off putting her with his first display of affection toward her. While she enjoys it at first, eventually Meryl asks how long this is going to last, to which Vash responds by screaming "Oh, this is a great day!" He then proceeds to swing her around and rub faces with her while laughing, scaring and annoying her until - in true Meryl fashion - she finally punches him and leaves him in the dust. 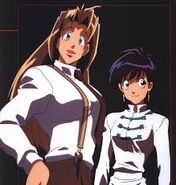 Meryl and Milly
Community content is available under CC-BY-SA unless otherwise noted.
Advertisement