Metagross is a Steel/Psychic-type Pokémon from Generation III. It evolves from Metang at Level 45, after evolving from Beldum at Level 20. In the Pokémon Ruby and Sapphire remakes, Omega Ruby and Alpha Sapphire, Metagross is capable of Mega Evolution when exposed to the Metagrossite.

Metagross physically resembles a quadrupled mechanical spider with a turquoise colored body shaped like a saucer. Its face is covered with a large X-like structure. On each end of Metagross's four legs are stubby claws that Metagross uses to grip onto rough terrain. Metagross is also able to magnetically levitate on its own and tuck in its four legs to move faster. In its Mega Evolved state, Metagross substitutes its terrestrial mobility in favor of flight. Its legs are now shifted to the front and its claws are more curved and sharper. The x-shaped marking on Metagross's face is now yellow instead of silver and a distinct spike protrudes from Metagross's chin.

By using its heavy bulk, Metagross is able to pin down its prey before consuming it whole. Evolving from two Metangs has given Metagross four brains that are linked to a network of neurons. This allows it to perform quick and complex calculations and become ten times smarter than a supercomputer. With this advanced intellect, Metagross is able to analyze its opponents in battle. If it cannot win, while in its Mega Evolved state, Metagross will dig its claws into its opponents and begin a timed countdown that results in a huge explosion. 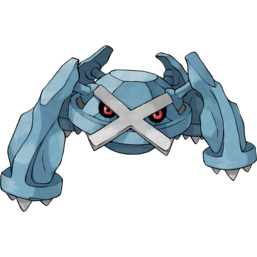 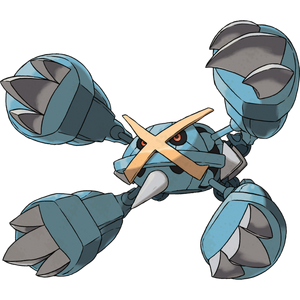 Retrieved from "https://hero.fandom.com/wiki/Metagross?oldid=2187375"
Community content is available under CC-BY-SA unless otherwise noted.