To fight other digimon

They are voiced by Neil Kaplan and Kyle Hebert (Greymon).

MetalGreymon becomes equipped with Greymon's armor and MailBirdramon is used as a jetpack. It gains and uses MailBirdramon's wings to fly, while the mask on its face and and claw on its left hand are nods to the original MetalGreymon.

Finding Axeknightmon as he and Nene attempt to enlist the aid of Deckerdramon to gain the Jungle Zone's Code Crown, Shoutmon × 4 and MetalGreymon fight Axeknightmon as he has Nene split him into Skullknightmon and Axemon to overwhelm his opponents with teamwork and alternate DigiFusions. Mikey tries to reason with Nene when she gives the order to reform Axeknightmon. Mikey learns that Nene is helping Axeknightmon because only he knows the whereabouts of her younger brother. Hearing Christopher telling Nene that she needs to be strong, Deckerdramon deems the youth to have the most heart of the present company. Deckerdramon decides to team up with Christopher at that time and gives him the Code Crown. Following an attack by MetalGreymon and Deckerdramon, Nene withdraws to the Dust Zone with Christopher pursuing her. After returning to help Beelzemon take out Kongoumon, Mikey resolves to help Nene. However, the moment the Fusion Fighters leave for the Dust Zone, a dark energy entangles Mikey as he ends up being separated from his teammates.

After the group are joined by Christopher when they attempt to protect the Chocomon from the LadyDevimon, who were obliterated by MetalGreymon before given the chance to regenerate, Mikey and Nene decide to sneak into the castle disguised as LadyDevimon with Cutemon dressed as a Lopmon to disable the castle's barrier so Christopher can launch an attack. As Christopher and MailBirdramon are attacked by Devimon, Nene and Cutemon distract a LadyDevimon. Mikey encounters the Dark General named NeoMyotismon who is known as the Moon-Light King. Lopmon follows Mikey and manages to destroy the barrier. With Shoutmon ×5 unable to fight NeoMyotismon, Christopher has MetalGreymon take over the fight. Shoutmon ×5 and Beelzemon deal with the Devimon and LadyDevimon armies. NeoMyotismon uses his Darkness Loader to absorb his forces to assume Darkness Mode One form. NeoMyotismon Darkness Mode One form overwhelms MetalGreymon with his quick regenerative powers before executing another DigiFusion with MetalGreymon. This leaves the Fusion Fighters, especially Christopher, in shock.

NeoMyotismon reveals that he had made himself immortal by absorbing all the Lopmon that his forces brought to him after absorbing MetalGreymon to assume Darkness Mode Two form. NeoMyotismon was about to absorb Shoutmon ×5 when he is spooked by Lopmon making himself glow white. This allows the Fusion Fighters to escape. Before they leave, Mikey assures Christopher that they will save MetalGreymon. When Shoutmon hears MetalGreymon's melody, he sees a chance to save MetalGreymon as he allows himself to be DigiFused by NeoMyotismon alongside Lopmon. Shoutmon and Lopmon find a partially deleted MetalGreymon and convince him to escape NeoMyotismon's body. 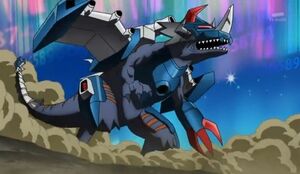 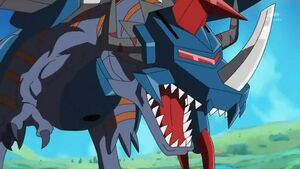 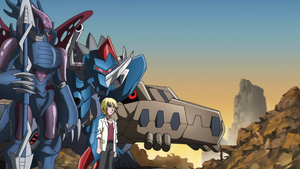 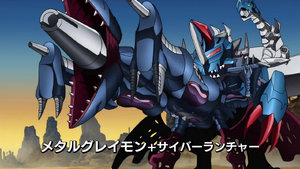 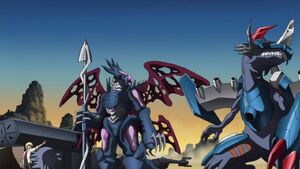