Metron is the New God of Time and hero in the war between New Genesis and Apokolips and in the DC Universe. He observes events in the universe and looks to expand his vast knowledge.

Metron was born a New God but hasn't been born on New Genesis or Apokolips claiming to be from a far more ethereal dimension. With his vast scientific knowledge, Metron helped the New Gods invent the Boom Tube technology that allowed the gods to teleport through dimensions. He travels the universe by sitting on his Mobius Throne that can pass through space and time itself. Metron always appeared in times of great importance, though he never interfered unless the universe was threatened.

Metron once heard a prophecy from the Source told by Highfather and learned that Orion was an adopted son from Apokolips and discovered Orion went there to face his birth father Darkseid. Orion first faced his half-brother Kalibak and Metron suddenly appeared and froze time so he could speak with Orion. Metron warned him of Darkseid's plan to use the Anti-Life Equation on the Earth and told Orion to go there. He teleported Orion and his Astro-Harness to Earth and then teleported away.

Metron was the Keeper of the Anti-Life Equation that Darkseid desires but shares it with no one. When the Earth was attacked by an alien invasion, Metron helped contact both Earth and New Genesis heroes including Orion, Mister Miracle, and Lightray and Metron himself fought alongside the Justice League and helped defeat the Extant. 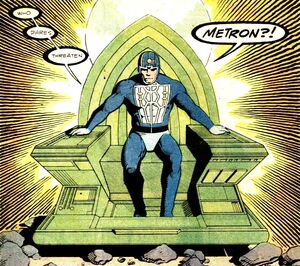 Metron in Superman: The Animated Series 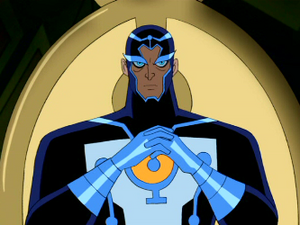 Metron in Justice League
Add a photo to this gallery
Retrieved from "https://hero.fandom.com/wiki/Metron?oldid=1951979"
Community content is available under CC-BY-SA unless otherwise noted.