To destroy the protagonist (formerly, abandoned)

To support the protagonist against Flowey (succeeded)

Mettaton is a supporting protagonist of Undertale. He is a robot with a SOUL and was built by Alphys in the Hotlands.

Mettaton originally appears as a gray, large rectangular box with a grid of lights at the top which can change color depending on his various actions, but are usually yellow and orange. He has four round dials along the bottom of his body, a single leg with a black wheel, and two segmented robotic arms wearing white gloves.

After having the switch on his back flipped in a Neutral or True Pacifist Route, Mettaton transforms into Mettaton EX; a new body he specially requested Alphys make for him. In this humanoid form, he has black hair with a long fringe that seems to cover his right eye, pale "skin" and visible metal segments below and above his left eye.

He has a pink chest piece, a narrow metallic waist with a box contraption, and black shoulder guards above his segmented arms, which end in gloves. The chest piece has what appear to be a speaker and some knob or gauge, while the waist has two parts that seem to act as a locking mechanism that holds his "heart-shaped core," as they both lose white pixels during his "heart-to-heart" attack. His long black-clad legs end in pink high-heeled boots.

After being confronted by the protagonist on the Genocide Route, Mettaton transforms into Mettaton NEO, which resembles Mettaton EX, but has a more combat-oriented design.

His right forearm is replaced by what appears to be a cannon, pauldrons clad his shoulders, which are shaped like legs and are longer than his arms, and he has wings on his back. The soul on his waist now points upwards in a more monster-like manner, and he has a heart shape engraved on his chest plate like Undyne the Undying. His hair on the right side is spiked out, revealing an entirely black segment of his face, with a sparkle or crosshair in place of his right eye.

Mettaton is a confident, charismatic, and charming TV host that loves drama, action, and violence. He lives for his ratings and adores performing. He supposedly strikes a pose when he does something wrong and makes time on his various shows to beat up "heel-turning villains." He shows a rather shallow appreciation for existence at times. However, despite his seemingly narcissistic personality, he deeply cares about the seemingly positive impact his show has had on the inhabitants of the Underground.

During the first fight, Frisk cannot take actions, but has to partake in a dangerous quiz show. To escape, Frisk has to select the correct answers, lest their soul suffer damage as Mettaton shocks it. Doctor Alphys reveals the answers to give some aid.

In the second fight, Frisk will have the shooter in their arsenal, allowing them to shoot projectiles from their very soul. They will need this to break the blocks that are launched when Mettaton attacks. Due to his metal body, Mettaton cannot take damage. Frisk must turn him around and flip the switch that Mettaton has on his back. When that happens, Mettaton freezes and says, "Did you... just flip... my switch!?", transforming into the Mettaton EX and leading to his second phase.

During Mettaton's second phase, Frisk has to score 10 thousand points with their various acts, or 12,000 within 14 turns.

As the Mettaton EX, Mettaton gains some new moves, like summoning disco balls. Frisk has to utilize their shooter to fire on the disco ball, and when that happens, the balls change its lights's colour. The lights deal damage if their colour is white. However, Frisk can avoid them by standing still if their colour is blue. The lights deal more damage when blue, but only if Frisk tries to move their soul through them. Mettaton can also summon Mettaton Mini-Me's to fire hearts at the soul. Frisk can avoid damage by shooting the Mini-Me's down. Mettaton will also utilize bombs and fire his soul to attack Frisk's soul.

Mettaton can also attempt to pop Frisk's soul by summoning copies of his legs, which stab onto the bullet board from one side (telegraphed by an exclamation mark on that side). Frisk can dodge this by shifting their soul to the opposite side. Mettaton can also swing his arms toward the bullet board. Frisk has to shoot the yellow bulb to force the arm to retract, allowing thrm to pass.

Later in his fight, Mettaton will cause a Pop Quiz to start. Players have to write down what they like most about Mettaton, with his reaction varying:

Mettaton will eventually drop bombs onto the stage. Frisk has to avoid damage by shooting the bomb, jumping to the side, and then jumping through the gap.

Mettaton will also launch his heart to shoot thunderbolts towards Frisk soul. Frisk can counterattack this by launching their own bullets at the murderbot entertainer's heart, which will retract after it gets shot 20 times.

As Mettaton NEO, Mettaton has a wide variety of different attacks, which include:

It is possible to finish the fight quickly by depopulating Hotland completely and striking before Mettaton can attack. 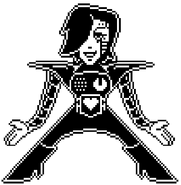