The New Species Pokémon
The Ancestor of all Pokémon

Save the world from Mewtwo (succeeded; Anime English dub only)

Defeat Mewtwo and prove that clones are inferior (failed; Anime Japanese version only)

Mew is the deuteragonist (secondary antagonist in the sub) of Pokémon: The First Movie, and the tritagonist in Lucario and the Mystery of Mew. It is a Psychic-type. It is able to learn almost every kind of move.

How powerful is Mew?

It is said that Mew's DNA possesses the genetic composition of every existing Pokémon species, thus allowing it to use all known Pokémon moves (and Pokémon's Exclusive Z-Moves, excluding Ultra Necrozma's Z-Move). Its possession of every Pokémon's DNA also allows it to de-evolve Pokémon, as shown in the TCG through its moves Devolution Beam and Devo Crush.

Although it can learn all moves, Mew can't learn powerful and rare moves such as Blast Burn, Judgment, Secret Sword and Freeze Shock, mainly because some moves are to be learned by a specific Pokémon, and Mew cannot learn them under a specific condition.

In Red, Blue, and Yellow, you can encounter a Mew by performing The Mew Glitch.

In Gold, Silver, and Crystal, you can get a Mew by using The Time Capsule.

In Ruby, Sapphire, their remakes Omega Ruby and Alpha Sapphire, FireRed, LeafGreen, Black, and White, you can get a Mew by Trade.

In Emerald, you can encounter a Mew on Faraway Island.

In Diamond, Pearl, and Platinum, you can get a Mew from the game My Pokémon Ranch.

In HeartGold and SoulSilver, you can get a Mew as a Mystery Gift or by Trade.

In Let's Go Pikachu! and Let's Go Eevee!, you can get a Mew by Transfer from Poké Ball Plus.

In Sword and Shield, you can get a Mew by Transfer from Pokémon HOME.

Mew made a cameo appearance at the start of the movie, and did not take a major role until later. A Mewtwo was cloned from Mew's DNA, extracted from Mew's eyelash. Later, Mew started appearing around New Island while Mewtwo was testing his starter Pokémon clones. Mew followed Team Rocket into the main part of the island.

When Mewtwo's other new clones were born, Mew came with them, but disappeared momentarily. When Mew reappeared shortly later, it tried to reason with Mewtwo, which led to a battle between the two. Ash stopped their battle by throwing himself in the middle of their attacks, which turned him to stone. After Ash was revived by Pokémon tears, Mewtwo flew away with its clones and Mew went with them. At the end of the movie, Ash briefly saw Mew in the sky, though Brock and Misty didn't see anything. After the credits are over, a brief scene plays showing Mew flying towards the mountains.

Mew makes a brief appearance in the hour-length special Mewtwo Returns. Mewtwo sees it after being thrown into the Purity Spring, although, like in the first movie, it may have just been his flashback. 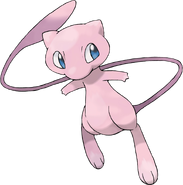 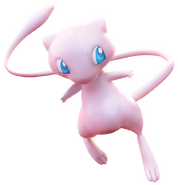 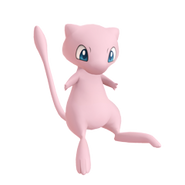 Mew eyes on the windmill

Mew giggling after popping the bubble that saved Ash Ketchum.