Deadite Mia
Abomination Mia
Roadkill (by herself)
Little Sister (by herself, possessed)
Pathetic Junkie (by the Taker of Souls/The Abomination)

Quit her drug addiction
Kill and torment her friends (possessed, succeeded except for David)
Defeat the Abomination (succeeded)

Mia Allen is the fictional protagonist of the 2013 remake of Evil Dead. She is portrayed by Jane Levy, who worked with Alvarez again with Don't Breathe, portraying Rocky. Her possessed self serves as the main antagonist.

She is the sister of David, and a friend of Natalie, Olivia, and Eric.  She is a recovering heroin addict that is trying to quit cold turkey.

She is the only survivor of the demon attack, having defeated the demons of the book.

Mia is 26 years old (born 1987) as said in the original script. She also was at her mother's deathbed, as David was not able to make it due to a new job in Chicago.  Mia posed as David when her mother mistook her for him, creating a tension between the siblings. The traumatic event of her mother dying had a serious emotional effect on Mia; it is possible that witnessing her mother's declining mental state contributed to her drug addiction.  She is superstitious and believes in protection from otherworldly forces. Because of her state when she saw her possessed self many times (while driving, in the water where she crashed and in the vine pit ) nobody believed her when she told Eric, David, Olivia, and Natalie.

In Evil Dead, Mia, David, Olivia, Natalie, and Eric, go to Mia's parents' cabin in the woods.  There, she decides to "play cold turkey" and dumps her heroin supply down the well.  When suffering withdrawal effects, she smells something dead in the cabin, though no one else can seem to smell it.  When the dog, Grandpa, begins to sniff the rug, they move it and find a bloodstained cellar door.  In the cellar, Eric and David find dead cats hanging from the ceiling, and the Naturon Demonto (Book of the Dead) near a shotgun on the table.  When Eric and David return upstairs, Mia admonishes them for bringing the book and the shotgun out of the basement.

When Eric reads a passage from the book, Mia sees a woman in a white dress calling her name in the woods.  She runs inside, telling David and Olivia that she needs to get out of the cabin because she is going insane.  Olivia tells her that they are not going to let her leave, because they think that she needs to stay in the cabin for a few days so that she can get clean, to which David agrees. Furious and feeling betrayed, she climbs out the bedroom window and hijacks Eric's car.  Driving down the road, she sees the woman in white in her path, and swerves out of the way only to crash right into a swamp, knocking her out.

After regaining consciousness and escaping the wreck, she is chased by an unseen force, eventually tripping and falling into a vine pit. Then as she becomes trapped by vines that has thorns that seem to go in her skin. She then sees a possessed version of herself that chokes up a bloody thorny vine that goes up Mia's dress causing her to become possessed. Afterwards, David finds her curled up in front of an oak tree, scared out of her mind. Back at the cabin, she tells David that she thinks that there is an evil force in there with them, but everyone passes this off as an attempt to get out of the cabin because of withdrawal.

Mia later burns herself badly in the shower by turning the hot water on full blast, fulfilling part of the Book's prophecy. David begins to drive her to a hospital, but is stopped when he finds that the road has become flooded by a river of fast moving water that is impossible to cross.  Back at the cabin Mia walks in with a shotgun found earlier, Mia shoots David in the shoulder with a shotgun, seconds before the unseen force bursts through the cabin door and flies to Mia. She screams as a demonic voice (implied to be Cheryl Williams) taunts the group, and remarks "You're all going to die tonight" in multiple simultaneous voices before falling to the ground. David tells Olivia to grab the shotgun but Mia grabs Olivia's arm as her eyes turn blue to yellow she tackles her

suddenly She then attacks Olivia and vomits a river of blood all over her face. Olivia throws her into the cellar and Eric locks her in. She later tricks Natalie into entering the cellar with her. The possessed Mia pins her to the cellar stairs and bites Natalie's left hand. Mia then proceeds to grab a box-cutter and splits her own tongue before kissing Natalie, but she is interrupted by David, who forces them apart. She then tells David to come down there so she can suck his cock calling him pretty boy in voices other than her own. (meaning David should go down and bang her which possibly would .. infect David) David stays up there protecting Natalie. The demon in Mia then states that Mia's soul is "being raped in hell", and David chains the cellar shut.

Later, Natalie's hand becomes evil and she grabs the electric knife in order to cut it off, but the possessed Mia tells her not to cut it off, only to cackle when she does it anyway.  Afterwards, Eric tells David that once the evil consumes five souls, the sky will bleed once again, and the dark one shall rise from hell. He also tells him that the only way to save Mia's soul is to kill her, either a alive burial, bodily dismemberment, or purification by fire.

David is reluctant at first, but eventually they're being attacked by a possessed Natalie and David shoots her in the other arm and Natalie who's no longer possessed asks David "why are you hurting me" and " why does my face hurt" then dies from blood loss after a while David decides to throw gasoline all over the cabin to burn the place down, but Mia begins to sing a lullaby when they were siblings "baby little baby it's time to say goodbye". David finds it impossible to kill her, so he goes down into the cellar to capture her, but she attacks him with the box-cutter, then shoves his head underwater and begins to drown him. Eric hits her over the head, saving David, but is stabbed by Mia's box-cutter, and he dies.

as David begins to bury Mia, she wakes up in her normal saying "David i can't move, i can't breathe" and David proceeds to keep digging because he knows that if lets her go then she'll attack/kill him and yells at him saying "your not her" then she says "why do hate me David?" ,"i know you do, you left me all alone with a sick mother and i was just a kid. you made me lie, everytime she screamed your name I told her that you come, but you never did" and then David would plead to her saying "i beg of you please stop" then she would say "i know mother hates now and she waits for you in hell". then David began to keep digging . Upon her death, David digs her up and proceeds to defibrillate her, seemingly unsuccessfully.

David laments the loss of his sister and walks away; Mia, free from the possession, awakens and calls his name, and the siblings embrace.  David tells her to wait at the car while he goes back inside to get the keys.  Inside, he finds a picture of them and Eric and Olivia sitting on a couch happy. When David turns around however, he gets stabbed in the neck with a pair of pliers by a possessed Eric. Mia sees this and tries to get her brother out, but he pushes her out the door and locks it.  Despite Mia's screams, David then shoots the canister of gasoline in the house, igniting the whole house with flames.

A grief-stricken Mia finds the buckthorn necklace that David had given her, but when she picks it up, it starts to rain blood, and a hand shoots up and grabs her wrist. Mia pulls away in fright as she witnesses The Abomination rising from the ground. Mia pulls away, and runs to the car but drops the keys while she was trying to start the car but the Abomination busted the window and burned her leg which caused her to crawl where she grabs a chainsaw.

She then is pursued by the demon, and in the chase, the Abomination flips David's Jeep onto Mia's hand, forcing her to rip it off to escape. As the Abomination approaches, Mia picks up the chainsaw and shoves it in the Abomination's face, killing the demon. It sinks into the ground, and the blood rain stops. Mia picks up the buckthorn necklace and puts it on as she absorbs the recent events before limping away from the scene as dawn breaks over the blood-drenched woods. In the original script it states Mia falls and a car stops telling her if she needs help and he'll take her to the hospital. 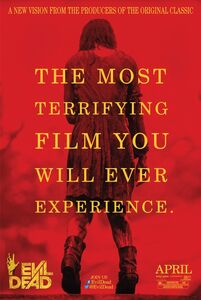 Mia on the Evil Dead poster. 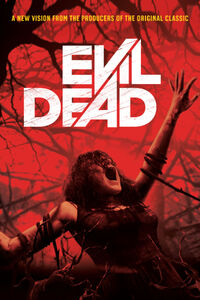 Another poster with Mia being attacked by the trees. 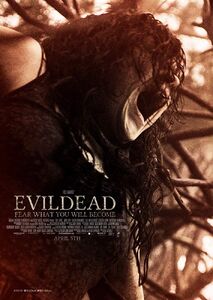 Another variant of her on a poster. 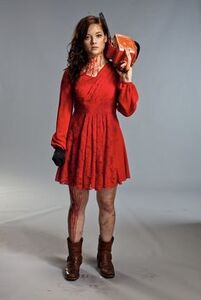 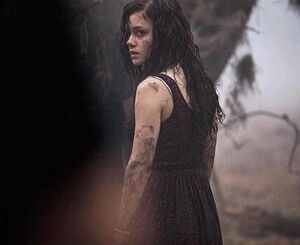 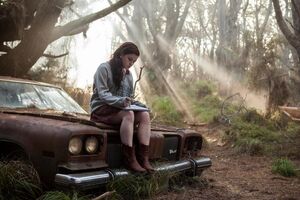 Mia on top of the car from the original film.

Mia and her brother David.

Mia pouring the drugs into the well.

Mia in front of the cabin.

Mia inside the cabin with the group.

Mia suffering from a relapse as Olivia expected.

Mia driving away from the cabin. 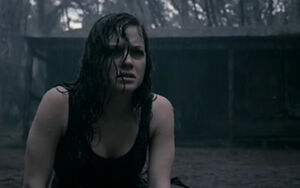 Mia after the car crash. 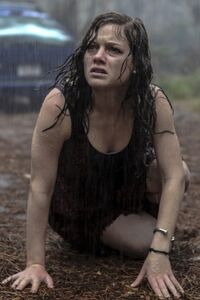 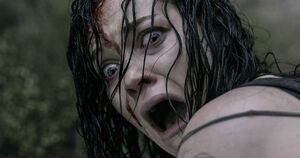 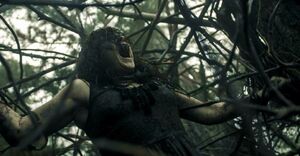 Mia being attacked by the trees.

The Taker of Souls taking the form of Mia. 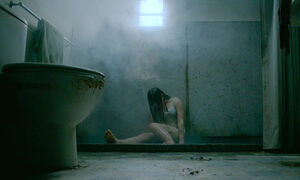 Mia scalding herself in the shower.

Mia convulsing as David attempts to take her to a hospital.

Mia in a trance, wielding a shotgun. 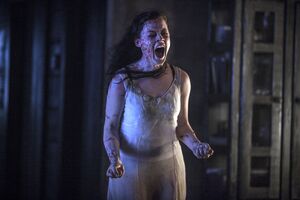 "You're all going to die tonight." 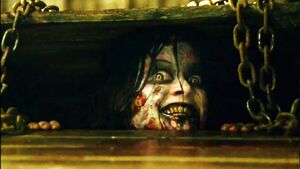 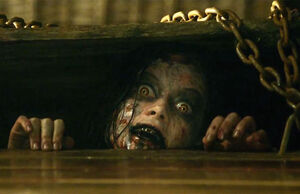 "Were gonna get you." 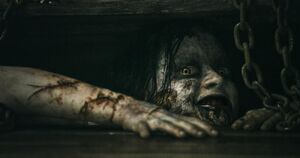 Mia attempting to escape the basement.

A possessed Mia tricking Natalie to come down to the basement. 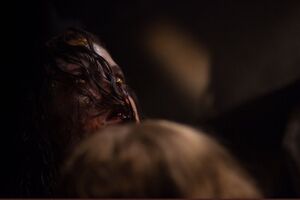 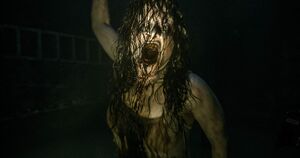 Mia taunting David while he buries her.

Mia revived and free from her possession.

Mia mourning the loss of her brother.

A tearful Mia holding onto the locket.

Mia at the start of the blood rain.

Mia shocked at seeing the Abomination.

Mia hiding from the Abomination. 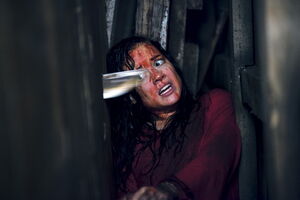 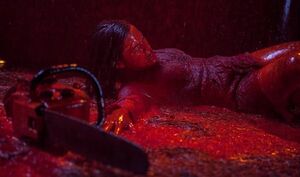 Mia beside the chainsaw. 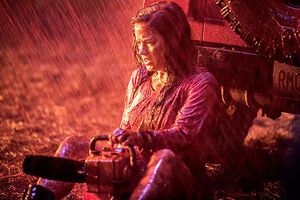 Mia putting a chainsaw on her arm to fight the demon.

Mia after defeating her evil self the demon. 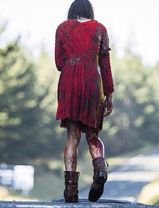 Mia walking away from the carnage.

Mia in the alternate ending.
Add a photo to this gallery

Retrieved from "https://hero.fandom.com/wiki/Mia_Allen?oldid=1709263"
Community content is available under CC-BY-SA unless otherwise noted.