Watching The Immortal and the Restless while eating popcorn.

Free his sister's soul from the underground facility.

Find his father (both succeeded).

Michael Afton, also known by his nickname Eggs Benedict and fake name Mike Schmidt, is one of the main protagonists of the Five Nights at Freddy's franchise.

He is the son of the notorious serial killer William Afton and the older brother of Elizabeth Afton who worked as a technician of Circus Baby's Entertainment and Rental, and later as the manager and owner of Freddy Fazbear's Pizza Place.

After discovering the horrible truth about his father and being reduced to a living corpse by his sister, he goes on a quest to "find" his father, eventually culminating in him working under Henry Emily, Afton's former business partner, while remaining unaware of his true plans.

He is also is believed to be either the Brother or the Crying Child from the fourth game, which would make him the Crying Child's older brother if the former is true. On top of this, it's also theorized that he took the identity of Fritz Smith and the Fazbear's Fright nightguard during the search for his father, and that his soul found its way into the Glamrock Freddy animatronic after his second death; None of these, however, have been confirmed thus far.

He is voiced by PJ Heywood, who also voiced his father William Afton.

A version of him appears as the tritagonist of the story "You're the Band" from Five Nights at Freddy's: Fazbear Frights. He, or a version of him, might also appear in the upcoming movie adaptation.

Michael appears in this game as the main protagonist. He works as a technician and was sent there by his father to free his sister's soul from Circus Baby. However, it's equally possible that Afton tried to get Mike killed.

On night 1, Michael arrives at Circus Baby's, and HandUnit welcomes him, showing him how to check the animatronics' stages, and if they are not in their proper places, he must shock them to put them back on their stage. Michael successfully shocks Ballora and Funtime Foxy but even though he shocks Baby, she does not appear.

On night 2, Michael checked Ballora and Foxy, but when he checked Baby, the controlled shocks did not work, requiring HandUnit to shut down the system in a bid to restart the power supply. Baby began speaking to him, telling him to hide under the desk. After surviving the Bidybabs, Michael crawled through Ballora Gallery, avoiding her by listening out for her music. He then reaches the Breaker Room, where he restarted all the systems while playing audio to keep Funtime Freddy from attacking him. Michael then crawls back through Ballora Gallery, and leaves the facility.

On night 3, Michael returned, checking Ballora and Funtime Foxy. He then ran through Funtime Auditorium while avoiding Funtime Foxy. Michael reached Parts and Service, where he performed a repair on Freddy, and caught Bon Bon in order to get Freddy's second power module. When he returned through Funtime Auditorium, Foxy attacked him, knocking him out.

On night 4, Michael woke up in a springlock suit. Baby began talking to him, explaining she kidnapped him. Then, two technicians entered the building and sent Ballora to the Scooping Room, where Michael was. He then witnessed Ballora get scooped, and survive an attack of Minireenas.

On night 5, Michael checked the stages, only to see two hanged technicians. He then returned through Funtime Auditorium, and entered Parts and Service, to see a lifeless Circus Baby. She explained that she is pretending and something bad happened that day. He then enters a random number sequence into a keypad that flips out of Baby's left central faceplate. After entering the passcode, Michael gets a chip from her upper armplate so she can communicate with him after she's been scooped.

If the player chose to follow Baby's instructions, Michael will get scooped by Ennard, who will take his body. This the game's canon ending.

After beating a Custom Night preset on Very Hard mode, you will be greeted to a secret minigame, which shows the events after Ennard had been stuffed inside of Michael.

In the first minigame, Michael looks like a normal man, wearing a purple shirt and blue pants. The people around him wave cheerfully.

In the second minigame, everything is the same, just with him having a minor skin color change from tan-pink to tan. The people around him continue to wave cheerfully.

In the third minigame, Michael's skin seems to be more of green color. The first person he walks past has a bewildered expression on his face. The rest are normal, just waving cheerfully.

In the fourth minigame, Michael's skin becomes a darker greenish-brown; his eyes are also now completely black. The last three people he walks by look in confusion.

In the fifth minigame, he looks much more decrepit than he did in the past minigames, with a strange glowing in one eye. Everyone around him appear very concerned.

In the sixth minigame, his skin has turned a dull purple, now having a white glow in both of his eyes. He also acts to be more senile and less cheerful than he was before. There are much fewer people around him and one of them is hiding behind their house in fear.

In the last minigame, he is hunched over and his skin is a dark purple color. His appearance is now very reminiscent of purple guy. Everyone around him have hid behind their houses in dread.

Eventually, his body has a spasm, and he regurgitates the robotic parts belonging to Ennard into the sewer. He lies on the ground, presumably dead. The player then hears Circus Baby's voice repeating "you won't die", and then Michael gets revived while Ennard's eyes show up in the sewer.

After beating V. Hard Golden Freddy mode, Michael Afton, speaks to his father William Afton, telling him that he was successful in freeing Baby and the others from the facility, but because they mistook him as William, they used him to escape. However, he somehow was left alive, but horribly disfigured, and because of this, Michael was forced to hide in the shadows. He then vows to William that he will find him, altough it is unknown what he means by that. After this, Springtrap is seen walking out of the burnt-out remnants of Fazbear's Fright for a second before the screen goes black.

Michael is confirmed to be the protagonist of the nights. In the minigames, he either bullies his younger brother and accidentally kills him, or is the little brother bullied, leading to his death. If the latter is true, then somebody eventually revives him.

Michael later takes the false identity of Mike Schmidt and becomes the night guard of the third Freddy Fazbear's Pizza. He is fired a week later for tampering with the animatronics and odor.

Michael returns in this game as the main protagonist taking the job of manager of Freddy Fazbear's Pizza Place. As well as working on the Pizzeria itself, Michael was also tasked with salvaging vintage animatronics which had appeared in the back alley, supposedly for parts. The first of these was Molten Freddy. Over the next few days, these included Scraptrap, Scrap Baby, and Lefty. While in his office, Michael fended off the animatronics, by luring them with sounds.

On the final night, Mike's boss revealed that the Pizzeria was a trap for all the remaining animatronics, with Mike luring them around the labyrinthine vents in circles. Henry praised Michael as his "brave volunteer", telling him that, while he was planning a way out, he knew Michael did not want it. Henry then burnt the Pizzeria to free the souls. As Michael Afton decided to stay inside, he finally died.

Before being scooped Michael was a Caucasian male with brown hair and blue eyes. After that he was scooped his body began to rot until his skin became purple, he lost his hair and his eyes became black with white pupils.

Michael's personality is unknown, but from the minigames of Sister Location, it is shown that Michael is well known in his neighborhood, which suggests that he is a very friendly and popular guy. Michael willingly went into the rental facility to save his sister on his father's orders, showing his initial loyalty to his family. He also seemed happy when saying Elizabeth was "free now", further showing his affection for her.

However, after his scooping, and revival, Michael possibly realized his father had sent him to die in his place, and vowed to find him. When Michael salvaged the remaining animatronics, he kept them distracted within the vents, with himself as bait, until Henry revealed his trap. Michael also willingly stayed behind when the Pizzeria burnt down, to finally die with his family.

From information gleaned from the Survival Logbook, he s a talented artist as seen from the many drawings on the pages of the logbook drawn in red pen, has a nasty habit of chewing bubblegum as seen on one of the questions, is quite sarcastic as seen from numerous shrewd comments written about the company, and is also fit for exercising around the block and wants to join a self-defense class as seen on a filled in question. It's also shown that Mike took the job because employees get free pizza. 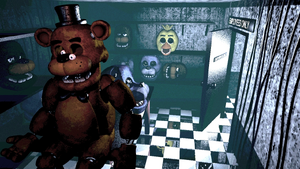 Michael's corpse in a Freddy Fazbear exoskeleton in FNAF 1's game over screen.

Michael after being killed and having his body stolen.