Uphold the ideals of Starfleet and the Federation.

Michael Burnham was the central protagonist of Star Trek: Discovery.

She was portrayed by Sonequa Martin-Green, who previously played Sasha Williams in The Walking Dead.

Michael was the daugter of Mike and Gabrielle Burnham. As a young girl she had been apparently orphaned after a Klingon raid on the facility where her parents were working. She was taken in by Sarek and his wife Amanda Grayson and raised by them.

Burnham was educated in a Vulcan learning center. During her youth Vulcan extremists bombed the learning center she was attending in an attempt to murder Burnham. In the aftermath of the attack Sarek mind melded with Burnham to revive her. This resulted in Sarek and Burnham having a permanent mental connection that stretched across space.

Burnham grew up to be the first human to graduate from a Vulcan learning center and the Vulcan Science Academy. In 2249, at Sarek's behest, she was commissioned as an officer in Starfleet on board the USS Shenzhou, under the command of Captain Philippa Georgiou. Eventually promoted to first officer, by 2256 Georgiou thought she was ready to be given her own command.

However during a confrontation with the Klingon leader T'Kuvma, Burnham was so convinced that they had to fire on the Klingons she attempted mutiny against Georgiou, and briefly incapacitated her with a nerve pinch. Burnham later attempted to assist Georgiou in capturing T'Kuvma, but after T'Kuvma killed Georgiou Burnham shot him with a phaser set to kill.

Pleading guilty when court martialed, she was stripped of her rank and sentenced to life imprisonment.

Six months later, during a transfer to another prison she was taken on board the USS Discovery after the shuttle required rescue. Captain Gabriel Lorca decided to offer her a position on Discovery to help them develop a new FTL drive, which would help in the war against the Klingons.

After the destruction of the Klingon ship Sarcophagus she and the Discovery crew were taken into the mirror universe by Lorca. After meeting the Terran Emperor Philippa Georgiou Burnham revealed that she was from the prime universe to Georgiou in order to keep from being executed. Burnham learned from the Emperor that the man she thought was Gabriel Lorca was actually a native of the mirror universe who was seeking to overthrow Georgiou.

Burnham defeated Lorca in hand to hand combat, and rescued the mirror Georgiou from almost certain death by transporting her on board Discovery. The ship arrived in the prime universe via the spore drive, but nine months later due to overshooting their trajectory.

By then the Federation was on the verge of being defeated. Georgiou advanced her plan to Starfleet to destroy Qo'noS with a hydro bomb. Burnham, Tilly, and Ash Tyler went undercover to Qo'noS, with Georgiou leading them to believe they were just going to plant a drone within a volcano to map out Qo'noS in order to carry out a full scale assault on the planet and destroy all their military target.

Burnham was horrified to learn what Georgiou was actually up to, with Starfleet's blessing. Standing up to Admiral Cornwell, Burnham and the crew of the Discovery declared they would not allow Georgiou's genocidal plan to proceed. Burnham managed to convince Georgiou to give the detonator to her, and she in turn gave it to T'Kuvma's disciple L'Rell. L'Rell was able to use the detonator to force the Klingon High Council to give her a leadership role in the Empire. Determined to continue T'Kuvma's quest to unite the Klingon race, she ordered the Empire's forces to withdraw from Federation space.

Due to her role in ending the Klingon-Federation war Burnham was pardoned by the Federation President and her record expunged. Burnham's rank of Commander was restored at that time. Burnham and the crew of Discovery all received the Starfleet Medal of Honor. Following the ceremony Burnham was posted back to Discovery as science officer. She and the Discovery crew left for Vulcan to take Sarek home and to pick up the ship's new Captain.

Enroute to Vulcan the Discovery stopped to assist the USS Enterprise, which had experienced a ship wide systems failure. Burnham was disappointed to learn from Captain Christopher Pike that her foster brother was not on board the ship, and was worried that she would not have an opportunity to patch things up with him.

Burnham later helped cure a mentally disabled Spock by taking him to Talos IV, where the Talosian Keeper and his people were able to cure Spock in exchange for the memory of the start of the conflict between Spock and Burnham.

Learning that Section 31's Control was seeking to evolve so that it could become sentient and wipe out all sentient life in the galaxy, Spock helped Burnham temporaily trap The Red Angel in the 23rd century before she was pulled back in to the future. After Burnham's mother was pulled back to the 32nd century Spock and Burnham began to repair their relationship.

Determining that Discovery held data that Control was looking for in order to evolve, Burnham helped take Discovery in to the 32nd century. When Spock was unable to accompany them, she advised her foster brother that there was a galaxy full of people looking to reach out to him, and that he should seek the person furthest from him for guidance.

After Discovery traveled forward to the 32nd century Spock, Pike, Number One, and Tyler all reported to Starfleet Command that Burnham and the Discovery crew had died during the battle against Control. Spock recommended that all surviving officers with knowledge of Discovery and her crew be sworn to secrecy about Burnham and her fellow Discovery crew members. Furthermore Amanda and Sarek honored their foster daughter's sacrifice by never speaking about her publicly again. 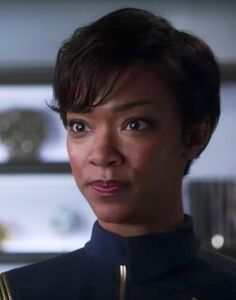 Burnham as a specialist.
Add a photo to this gallery
Retrieved from "https://hero.fandom.com/wiki/Michael_Burnham?oldid=1685565"
Community content is available under CC-BY-SA unless otherwise noted.