Drug dealer
Affiliate of The Order

Stop Dahlia's plans and make her return things back to normal in the real world (failed).

Dr. Michael Kaufmann was the staff director of Alchemilla Hospital within the northeastern town of Silent Hill. He was an associate of Dahlia Gillespie, the leader of the local religious cult known as The Order. He is the secondary antagonist of Silent Hill: Origins, turned anti-hero/supporting protagonist in the first Silent Hill videogame.

He was voiced by Jarion Monroe.

While at first seeming like a mere civilian, he is a close associate of Dahlia Gillespie and the Order. Kaufmann has an alliance with her centered around drugs. Kaufmann arranged her daughter Alessa's medical care after her immolation at the age of 7 and oversaw her nursing. Kaufmann dealt in the hallucinogen PTV, derived from a local plant called White Claudia. Kaufmann worked alongside his colleague, Norman Young, selling PTV and receiving a considerable profit in the process.

The Order was responsible for the dispersion to tourists as well as Lisa Garland, one of Kaufmann's nurses. Lisa was forced to care for Alessa in the hospital basement against her will, under threat of drug withdrawal. During the introduction sequence of Silent Hill, Lisa is shown arguing with Kaufmann, after he initially tries to grasp her arm as she walks away.

After Alessa split her soul, as she was horribly burned during the cult's ritual to birth the Order's God, her mother Dahlia took Alessa to the hospital to be kept out of sight until the other half of her soul returned so she could give birth to the cult's God; Kaufmann is shown in a flashback at having been displeased with this task. Perhaps in mistrust, he kept samples of Aglaophotis, a substance capable of aborting the "god" within Alessa, in his office and in the gas tank of a motorcycle parked in Norman's Motel. A substitute body was also left at the scene by Kaufmann.

Upon entering Alchemilla Hospital, Travis Grady encounters Kaufmann near the elevator. Travis questions Kaufmann on the condition of Alessa, but Kaufmann denies any knowledge of the incident. Tiring of the conversation, Kaufmann leaves in an elevator, taking it to the second floor, the only floor accessible at this time. Upon entering the lift after Kaufmann leaves it, clues indicate the girl was in the hospital, such as a gurney in the lift with fresh blood on it.

Later when Travis reaches the Riverside Motel, upon entering the Otherworld, Travis hears a "sexual encounter" between a man and a woman through a hole in a motel room. Jumping through a hole above the room, Travis finds Kaufmann and Lisa Garland, both of whom appear to be in the midst of finishing redressing. Kaufmann then voices his impatience at seeing Travis still in Silent Hill, having recommended he leave during previous encounters. Once alone in the motel room, inspection shows the presence of white powder, likely the drug PTV that Kaufmann deals in, in the bathroom and on a mirror in the bedroom.

Kaufmann makes another appearance before the game's final boss, in which he gasses Travis before he can interrupt the cult's ceremony. Upon the defeat of the boss, when the Flauros separates the baby from Alessa, he is seen escaping the room as this occurs.

Kaufmann's final appearance in the game is a voice conversation between him and Dahlia. Kaufmann questions Dahlia over the next stage of the plan. Dahlia informs him the other half of the god will return some day. After Kaufmann suggests it could take years, Dahlia responds with "We can wait."

According to the novelization, just before the events of the first game, Kaufmann learned of the Order's treachery and he planned on fleeing to another country. When he discovers Dahlia came to the hospital to smash his Aglaophotis vials, Kaufmann rages and vents. He wouldn't be needing clothes and there was no time for gathering unnecessary possessions so he forwent a bulky travel bag in favor of sorting essentials in an unassuming attaché case. He packed two passports, one with his actual name and a counterfeit bearing a pseudonym, a stash of gold and wadded bills taken from his safety deposit box, a 9mm handgun and two boxes of ammunition, and an emergency set of medical supplies.

When Harry Mason first finds Kaufmann in Alchemilla Hospital, he is in a state of disbelief, sitting in an examination room with a gun in his hands. He stares down at an Air Screamer he has just shot, which lies in a puddle of blood at his feet. As Harry tries to confront him, Kaufmann fires a warning shot, returning to a state of "normality" when Harry is able to persuade him not to shoot. Knowing his vial of Aglaophotis has been shattered by Dahlia, he immediately sets out for the other sample located in a motorcycle in Norman's Motel.

Kaufmann's fate determines the game's ending. Depending on the player's actions, Kaufmann is either overwhelmed by a Mumbler inside Annie's Bar at the Resort Area (resulting in the Bad/Bad+ routes), or rescued by Harry (resulting in the Good/Good+ routes). If saved, Kaufmann is thankful, but his business presses him onward. If Harry finds the Aglaophotis in the motorcycle stash (the Kaufmann sidequest), Kaufmann reappears and angrily snatches it away. Because the canon route is the Good/Good+ route (since Harry doesn't receive a baby in the Bad/Bad+ routes), this means Harry must have saved Kaufmann and did the Kaufmann sidequest.

At the conclusion of the game (following the canon Good route), Kaufmann appears unexpectedly as Harry confronts Dahlia and Alessa in Nowhere and shoots Dahlia. Kaufmann demands she make everything normal again, and promises that she will regret using him. Wounded but still gloating, Dahlia tells Kaufmann that his usefulness is over. Kaufmann responds by retrieving a bottle of Aglaophotis from his pocket, catching Dahlia off-guard; she hadn't counted on him keeping another sample. Against Dahlia's protests, Kaufmann throws the Aglaophotis at Alessa, which shatters and causes her to expel the Incubus, apparently not an effect Kaufmann had intended. After the demon incinerates Dahlia, Kaufmann inexplicably disappears while Harry battles the demon in a final boss fight and then reappears after its defeat, having apparently been inexplicably knocked unconscious to the floor off-screen.

Following the final boss, Kaufmann reawakens and sees Alessa creating a glowing portal for Harry to escape through. Kaufmann makes a motion to follow after him, but is dragged back at the last moment by a bloodied Lisa Garland who crawls up through the floor grating. Lisa latches her arms onto the screaming Kaufmann, and the two of them fall backward into an unseen pit. 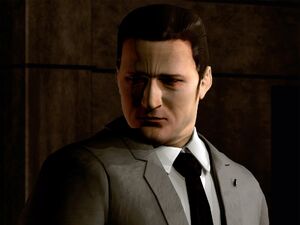 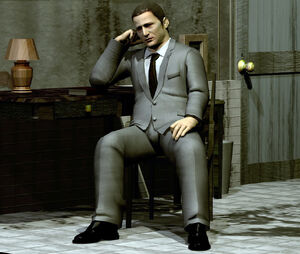 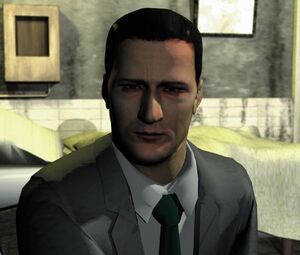 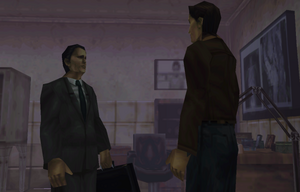 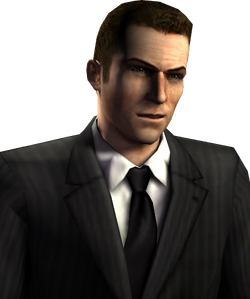 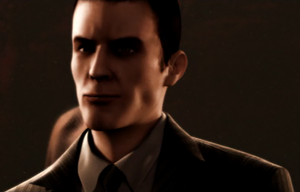 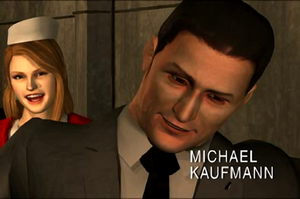 Kaufmann in the blooper reel.

Kaufmann in the blooper reel.

Kaufmann on the very right. 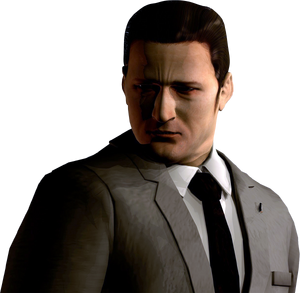 Retrieved from "https://hero.fandom.com/wiki/Michael_Kaufmann?oldid=2048906"
Community content is available under CC-BY-SA unless otherwise noted.