No information
Michelangelo is one of the main characters of Rise of the Teenage Mutant Ninja Turtles.

He is voiced by Brandon Mychal Smith.

Mikey is very similar to his previous incarnations as he loves to crack up jokes and is generally more optimistic than his brothers. He has a passion for art, presumably of many kinds as he is shown to have a passion for painting and for cooking. Mikey can be very oblivious to dangerous situations, mostly unaware of what kind of trouble he could be in. He also tends to be naive, but also kind-hearted.

Mikey is also shown to be attuned to pop culture, based on some of his word choices, his knowledge of celebrities (like Rupert Swaggart) and his love for rap music. However, Mikey has mixed appreciation for certain retro/old school icons, such as his disappointment with the dated graphics from the Lou Jitsu video game.

Mikey is also easily frightened when in a scary situation, and often has the tendency to react quickly by screaming rather loudly and not stopping screaming for a while. To add to his oblivion, he does not think things through when he's scared. It usually leads to him hiding in his shell.

Mikey also gets upset or angry if things don't go the way he hopes, such as when he snaps whenever someone tries to sabotage his love for pizza, which can allegedly make him unstable. He also does not appreciate when others look upon as being dependent, as such as in "Hot Soup: The Game", where Mikey is eager to do things on his own, much to Raph's disapproval.

Mikey has three "Personalities" Dr. Delicate Touch, Dr. Positive and Dr. Rude. (Introduced in the cancelled "Wedding Smashers") He uses Dr. Delicate Touch the most to tell the hard truth in a harsh tone. When he uses the "Dr. Delicate Touch" method, he sometimes starts off as being sweet but quickly becomes angry and straight to the point. Examples of such can be seen in episodes like "Pizza Pit" or "Bullhop".

Mikey is shown to be very competitive as seen in "You Got Served" when he is determined to win despite Leo saying it isn't a competition.

In "Repairin' the Baron", Mikey is shown to have a sympathetic side. After defeating Draxum in the finale first season Mikey is shown to help Baron Draxum tolerate humans and improving his relationships much to Draxum's dismay. Mikey doesn't like assuming the worst in people until they rub him the wrong way or hurt anyone of his friends and family. He tries to justify Foot Recruits unusual suspicious attitude during their first meet in "Hot Soup: The Game".

Michelangelo has teal green skin, yellow-orange circles painted on his shoulders and thighs, a bright yellow plastron with neon pink and blue lighting bolts painted on it, and a navy teal carapace with yellow-orange designs. He has black eyes, a small gap on the right side of his upper jaw, three fingers on each hand and two toes on each foot.

Mikey wears an orange mask over his eyes (with short mask tails), orange wristbands and color-matching socks and orange knee pads with faces drawn on them (dead face on the right and smiley face on the left). He also wears a light brown belt around his chest and strap over his right shoulder, as well as a Turtle emblem over his heart.

Mikey began life as a juvenile turtle in Baron Draxum's laboratory. Wishing to create a mutant army with formidable combat capabilities, Draxum used Lou Jitsu's DNA paired with his ooze to turn Mikey from an ordinary turtle into a mutant. He and his brothers were then stolen from Draxum's laboratory by Lou Jitsu promptly after their mutation and Mikey went on to be raised in the sewers of New York City alongside his brothers by Splinter. Eventually, Mikey and his brothers met a human girl named April O'Neil and forged a strong bond with her through the years. 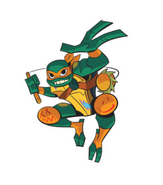