Defend the Divas Champion. To be in love with The Undertaker and become a mother (both succeeded). Keep an eye on her husband The Undertaker (currently).

Michelle Leigh McCool (née Calaway) is a retired Diva wrestler (born in January 25, 1980) in WWE. She is married to The Undertaker.

Michelle McCool is very protective towards the Divas and WWE Superstars, she sometimes loses her temper by yelling in frustration, she confronted Beth Phoenix who vows to get the Woman Championship back and she slapped her in the face, she sometimes confront Maryse for no reason in a feud with her friends.

After losing a match Loser leaves WWE, Michelle McCool is a retired Diva but an former Diva, she married to the legendary wrestler The Undertaker in 2010 after she meets him in late 2007 and together, they had their daughter Kaia Faith born on August 2012.

In 2014, she and her husband The Undertaker participate to the marathon for the good cause and they accept the ALS Ice Bucket Challenge for the good of the wrestlers and people including Kermit the Frog from The Muppets franchise, even Edge, Christian and Batista.

Michelle McCool with her husband The Undertaker 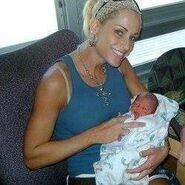 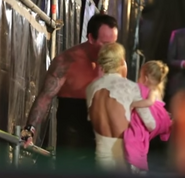 Michelle and her daughter Kaia Faith with The Undertaker

Add a photo to this gallery
Retrieved from "https://hero.fandom.com/wiki/Michelle_McCool?oldid=2049045"
Community content is available under CC-BY-SA unless otherwise noted.