Be a successful guest player.

Bigger version of himself in Wiz (brethren)

Raiden Fighters 2 and beyond

Miclus is a mascot of a Japanese video game company, Seibu Kaihatsu. It served various roles in Seibu kaihatsu's library of games as both a sidekick and a final boss in Wiz(sidekick is a miniature version of final boss and part of Wiz's magics(8th)), rare collectible item Raiden series, and game secrets. It is also the most notable role as a secret playable character in both Raiden Fighters 2: Operation Hell Dive and its sequel, Raiden Fighters Jet.

Miclus can fly in all games it started as a player or an enemy.

Upon summoning, Miclus will fly toward Wiz and surround him. When an enemy(ies) appear, Miclus will charge at enemy(ies) and blow them away. This is effective only against weaker minions however, and it has no effect against Boss version of Miclus, a fully matured dragon.

The boss Miclus can breathe fast fireballs which have semi-homing capability, can manipulate its size from small to large, and can kill Wiz by the fireball it breathes, or mere physical touch. To make matters worse it has extremely high durability: only the 6th and 7th magics of Wiz can take care of Boss Miclus quickly before it kills him. So in short, the final duel with the boss Miclus is not long or prolonged, but decisive and instant: the duel is decided the moment they meet. If Wiz does not have his cursor on either the 6th or the 7th magic he will get a rematch... At the cost of one life stock.

Its main weapon is highly damaging fireballs. Like Slave , it requires just four "M" or "L" powerups to fully power it up but without a sub-weapon. Its bomb weapon is a devastating flamethrower that the player can bend by moving left and right. Unlike other fighters, this creature does not destroy enemy bullets. But while breathing the flame Miclus' body becomes totally invincible to enemy bullets. 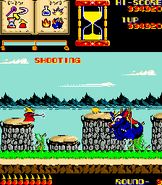 Miclus initially appears as a final boss in Wiz (before it evolves into a collectible item in Raiden). 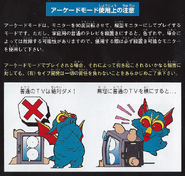 Retrieved from "https://hero.fandom.com/wiki/Miclus?oldid=1806766"
Community content is available under CC-BY-SA unless otherwise noted.