The Legend of Zelda: Twilight Princess

Resident of the Twilight Realm

Princess Midna, also known as the Twilight Princess, is the titular deuteragonist in The Legend of Zelda: Twilight Princess. She is a resident of the Twilight Realm and a descendant of the ancient Twili people. At first she seems to be a strange, dark creature with an agenda of her own and little regard for Link but she ends up changing her attitude towards those who are willing to help her. Midna is an imp that serves as Link's sidekick and adviser. A creature of the Twilight Realm, she is able to hide in Link's shadow in the light world of Hyrule, but her powers are much greater in the Twilight Realm. Her true form and identity are revealed as the story progresses.

Standing a head taller than Princess Zelda, Midna possesses orange hair, red eyes and a pale blueish complexion from the Twilight Realm. She wears a hooded cloak in similar design to Zant's leading some to believe that this may be some kind of royalty garb. With this, she wears a half-dress that reveals one leg bare, and a headdress (or crown). Strangely, she slightly resembles Veran from Oracle of Ages. She wears a shackle like wrap on her right leg, possibly implying Zant may have imprisoned her when he rose to power.

Since Princess Midna is one of the Twili, Midna is unable to withstand the light in Hyrule and, as such, hides in Link's shadow whenever he is in the Light World. After Princess Zelda sacrifices herself and transfers her light essence to Midna, she is able from then on to take her physical form even when she's not in the Twilight; however, she still chooses to hide in Link's shadow for most of the game.

Midna's function in the game is like that of Link's previous companions: she helps the player learn the controls for the game and often gives Link hints on what to do or where to go next. When Link is a wolf, Midna will ride on top of him and be able to create an energy field to help the young hero lock on to enemies and defeat them easily, as seen in the case of Shadow Beasts. Players can choose to talk to Midna at any time by pressing the "Z" button on the GameCube controller or up on the Directional Pad on the Wii Remote.

When Wolf Link is in a certain area or near a faraway platform, Midna's icon will flash, which, when pressed, will make Midna float over to that area that Wolf Link can jump to. This is especially helpful to Link since it allows him to reach otherwise inaccessible platforms. Obtaining the Shadow Crystal later on in the game will allow Midna to switch Link between human and wolf as desired.

Midna’s personality is a stark contrast from the refined state of Princess Zelda. Though she initially is shown to be a loner, completely defiant of the goals and objectives of the other characters, which once Zelda sacrifices her form to save her, Midna gains new faith for Link and the people of Hyrule. Throughout the course of Twilight Princess, Midna forms a close friendship with Link.

When in the Twilight Realm, Midna can create a field of energy around Link, which Link can use to perform a series of quick, successive attacks. Princess Midna can also use illusions to change her form’s appearance. Additionally, Midna can transport from area to area through a warp system, and in context-sensitive moments, help Link quickly leap from point to point.

Princess Midna first appears immediately after Link awakens in the Twilight Realm. Link, imprisoned and in his wolf form, reluctantly allows Midna to cryptically give him hints and ride on his back. As the duo travels through the Twilight Realm version of Hyrule Castle, they encounter Princess Zelda, who informs the two of the danger of the Twilight Realm. Midna, after addressing Princess Zelda as the “Twilight Princess,” tells Link to find the ancient artifact called the Fused Shadow, all without revealing her true motives.

After collecting all of the Fused Shadow artifacts, the Light Spirit Lanayru is summoned, right before the Usurper Twilight King Zant appears. Zant steals the Fused Shadows and after attempting to persuade Midna to join him, he exposes Midna to Lanayru’s light, leaving Midna in a critically scarred state. Barely alive, Midna is carried to Zelda by Link in his wolf form. Zelda offers her very existence to save Midna, who instantly abandons her previous intentions in order to stop Zant not only to save the Twilight Realm, but all of Hyrule. Zelda, before her disappearance, informs the two of the Mirror of Twilight, a bridge between the light and Twilight Realms.

Link and Midna traveled to the outskirts of the Hyrule land to the Arbiter Grounds, only to find the Mirror of Twilight broken into four pieces. The truth is revealed by the Sages of Hyrule, who describe Midna’s true race as the Twili people, wielders of ancient and forbidden magic who were banished to a realm of shadows known as the Twilight Realm, with Midna herself being the realm’s true leader. Zant also is the cause of Midna’s impish form, as he put a curse on her before abandoning her.

After the collection the Mirror of Twilight shards, Link and Midna enter the Twilight Realm to fight Zant, who is ultimately defeated by Link and killed by Midna, who uses the Fused Shadows’ true power to finish him off. It is then revealed to Link and Midna that Zant was only a puppet in the grand scheme of things, with Hyrule’s eternal evil Ganondorf being the true enemy. Midna guides Link to Hyrule Castle, where the two confront Ganondorf.

Midna then uses the Fused Shadows’ power to attack Ganondorf, only to be defeated, as Ganondorf appears before Link and smashes the Fused Shadows before him. Link and Zelda then defeat Ganondorf. Princess Midna is revived by the Light Spirits of Hyrule, ultimately breaking the hex upon her and returning her to her true form. Link, Zelda, and Midna return to the Mirror Chamber, bidding farewell to each other. Midna then destroys the Mirror of Twilight; the only link between the two worlds. 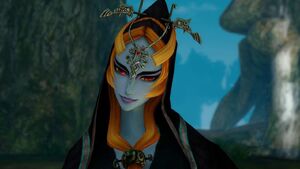 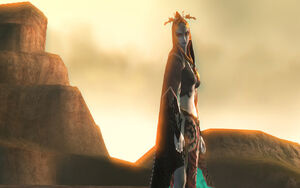 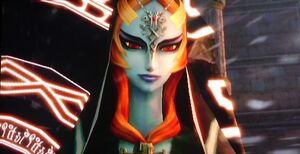 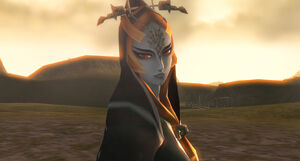 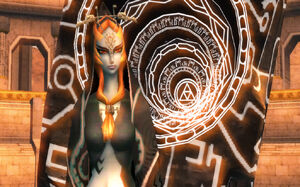 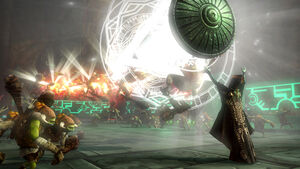 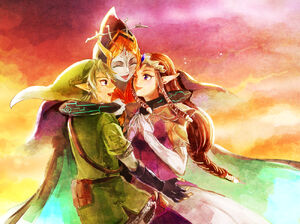 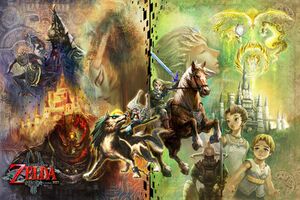 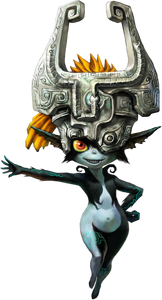 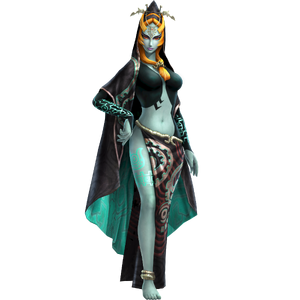 Retrieved from "https://hero.fandom.com/wiki/Midna?oldid=2324753"
Community content is available under CC-BY-SA unless otherwise noted.