Guardian of the mountains

Titular Heroic Monster
Joe Young is a huge giant gorilla and the titular main character in 1949's Mighty Joe Young, and again in the 1998 Disney reincarnation, as the deuteragonist. He is a gigantic and benevolent, but initally paranoid, mountain gorilla who wants to live peacefully.

Joe is first seen as a baby when Jill finds him in the grass and plays peek-a-boo with him until Jill's mother catches her. Joe is seen again running away from the hunters with Jill, until her wounded mother finds them and holds her daughter close when she was fleeing from the hunters. Before she dies, she tells Jill to take care of Joe.

Twelve years later, Jill has raised Joe who, because of a rare genetic anomaly, has now grown to a height of 15 feet (4.6 meters) and weighs 2,000 pounds (910 kilograms). As a result, the other gorillas won't accept him and both are now living in relative peace until a wildlife refuge director, Gregg O'Hara, convinces Jill that they would be safer from poachers if they relocate to Los Angeles.

The trio goes to Hollywood, and win the hearts of the refuge staff, who are so impressed by Jill's relationship with Joe that they put her in charge of the Gorilla. One day, Jill is approached by Strasser, who is now running a fraudulent Animal Preserve in Botswana while actually selling animal organs on the black market. He has seen a news report about Joe and is now eager for revenge. At first Jill does not realize Strasser was the poacher who killed both her and Joe's mothers, since Strasser's right hand is hidden in his coat pocket. Strasser tries to convince Jill that Joe would be better off in his wildlife refuge back in Africa. Later, during a gala, Strasser's henchman, Garth, uses a poacher's noisemaker to scare Joe into a frenzy. Joe trashes the gala, recognizes Strasser and tries to attack him. Joe is then captured and placed in a concrete bunker. Before their departure, Gregg has fallen in love with Jill and he kisses her goodbye. Shortly after Jill leaves, Gregg discovers a poacher's noisemaker that the maintenance had found, making him realize that Strasser is a poacher and he goes after them to save Jill and Joe. On the way to the airport, Jill notices the half-glove covering Strasser's missing fingers, and finally realizes who he really is. Just then, Strasser notices Greg pursuing them and pulls out his revolver, but Jill punches him in the chest, then leaps out of the truck and into the street. Joe sees her and rocks the truck over onto its side and escapes. Greg finds Jill, who reveals to him that Strasser killed her mother and plans to kill Joe and they rush off to find him.

Jill and Gregg eventually locate Joe at a carnival where he is playfully wreaking havoc. Strasser arrives and attempts to shoot Jill, but Garth pushes Strasser's gun away from Jill and causes him to fire at a spotlight, subsequently starting a fire and causing the Ferris wheel to break down. Realizing how ruthless Strasser truly is, Garth says that he quits, but Strasser knocks Garth unconscious with his gun. Strasser eventually confronts Jill and attempts to kill her, but Joe sneaks up behind them and tosses Strasser into the air, where he grips onto electrical wires over a transformer. Short two fingers on the hand holding the wire, as he lost his thumb and trigger finger, Strasser is killed when he loses his grip and he falls into the transformer, electrocuting him, and leaving only the half-glove hanging from the wiring.

Joe is later seen in the fire-at-the-fairground scene where he has to rescue Jason, a little boy, from the Ferris wheel, but falls hard on the ground in the process and lays asleep, making Jill desperately think that he is dead. Jill tries to wake him up a few times, but nothing happens, and she falls into tears. Several minutes later, Joe slowly opens his eyes and he and Jill are reunited. Joe is then given his own wildlife habitation, where he can roam free and live in peace.

Joe is always loyal and faithful, but can act very violent and hot-tempered when provoked or when things go wrong. Originally Joe is supposedly able to grew into the same size of typical adult gorilla in his adult years, but due to because of a rare genetic anomaly, has now grown to a height of 15 feet (4.6 meters) and weighs 2,000 pounds (910 kilograms). 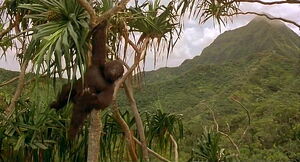 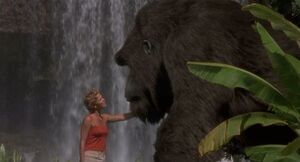 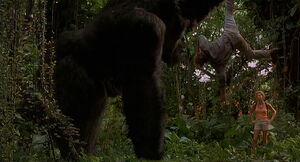 Joe holds Greg by his foot 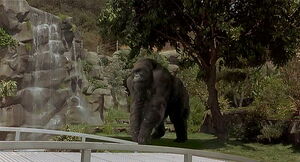 Joe at his California preserve. 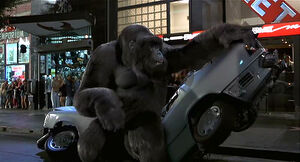 Joe destroys a car when its alarm annoys him. 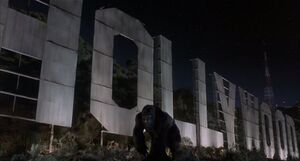 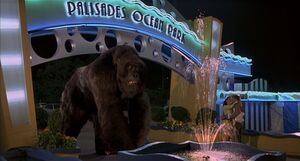 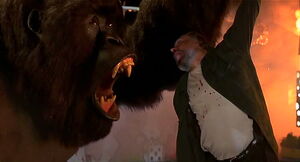 Joe roars at Strasser's face to save Jill 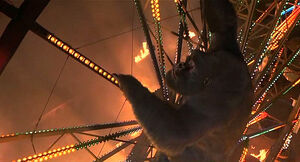 Joe climbs up the Ferris Wheel to save Jason. 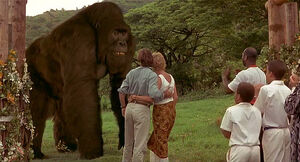 Jill and Greg open up a wildlife sanctuary for Joe. 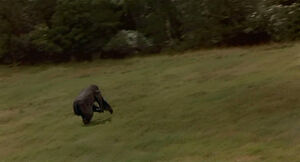