Miguel Santos is the smart, caring, older twin brother of Maya on Maya and Miguel Unlike his sister, he is very logical, although is often dragged into his sister's schemes reluctantly, although sometimes wants to help her. His best friends are Andy Arlington and Theo McEwen, they are part of the Playa Squid Squad”, a hang the runs the neighborhood, but helps those in need too. Like carry groceries, feed pets, walk dogs, babysit, and other good deeds. But usually six of them (Maya, Miguel, Chrissy, Maggie, Andy, and Theo) make something happen.

Miguel is fun, but also has a serious side. He helps Maya often when she is in trouble, and has a very good attitude to working. He has a knack for drawing. It is said that he can draw his sister's face from his brain. He is also excellent at various sports such as basketball, soccer and baseball.

Miguel is a Hispanic/Latino/Mexican-American 10-year-old boy. He is also part Puerto Rican (his mother, Rosa, is from Mexico and his father Santiago is from Puerto Rico.) He has a tan-complexion, brown spiky hair, and brown eyes. Miguel usually wears a collared light-blue button shirt, blue cargo pants, and dark red and white sneakers.

Sometimes he can be seen wearing a Soccer Uniform when he plays soccer. The uniform has actually changed colors throughout the shows seasons and episodes. At first it was a Purple-Yellow uniform then it changed to a red and yellow uniform. It is unlikely that they are the home and away uniforms as in one episode he is seen wearing a Red and Yellow uniform at tryouts for a big league travel team. 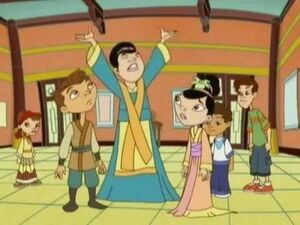 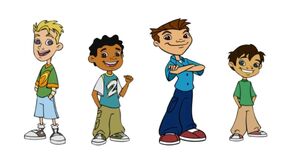 Retrieved from "https://hero.fandom.com/wiki/Miguel_Santos?oldid=2041109"
Community content is available under CC-BY-SA unless otherwise noted.