Being played as by the player

Miis are some of the main and most iconic Nintendo characters. A Mii is a humanoid digital avatar that players can create as they want in the Mii Channel and in Mii Maker that can be used in certain Nintendo games or softwares to represent the player. The name Mii comes from the word "me". Miis can only be created and used on Wii, 3DS, Wii U, and Switch.

The Miis were first playable in their own special titles that were also launch titles for the Nintendo Wii, that being first Wii Sports and then the later installment Wii Sports Resort. In these games, the Miis would compete with friends, family, rivals and what not in sports such as Boxing, Tennis, Table Tennis, Bowling, Swordsplay, Baseball, Basketball, Dogfight and more.

Miis appeared with Wario in WarioWare: Smooth Moves. In this game, the Miis are used as personal files and representation for the player during the microgames.

In the microgame Tightrope (which is one of 9-Volt's microgames), the object of this microgame is to not let a male Mii fall down while carrying a pole and crossing a tightrope, hence the name.

In Mario Party 8, Miis are playable characters and are sometimes seen in the background of mini-games. They are exclusively playable to the Extras Zone. The Miis in this game wear overalls, gloves, and shoes like the Mario brothers. The shirt they wear depends on the player's color, not their favorite color. Miis also personalize players' files. They have no voices in this game. This is also the only Mario Party game where Miis are playable.

Miis are playable characters throughout the Mario & Sonic series. They also usually have 5/10 stats. They however lack a voice and an original name. Later in the Olympic Winter Games, they can be customized to wear different clothing and accessories. Their stats now differ and depend on gear. They can also gain gear from boss battles from Festival Mode. They also appear in the London 2012, Sochi 2014 and Rio 2016 installments.

A Mii changing Dr. Mario as the main man or woman in Dr. Mario online Rx. In Dr. Mario online Rx, Miis are able to update Dr. Mario because the playable person. here, they must maneuver Megavitamins tossed into a tumbler jar so that it will break the Viruses. so as for a pandemic to be destroyed, it ought to be related to as a minimum one Megavitamin of the identical colour. Unlike doctor Mario, Miis speak. Miis can tell the player what number of minutes have passed and what number of capsules they have got thrown.

Miis also appear as playable characters in the Mario Kart series. They make their playable debut in Mario Kart Wii. In-game, they have two different outfits indicated by A and B. Outfit A is comprised of a Mii wearing a racing suit with a blue Mii logo, while Outfit B has them wearing overalls of Mario or Luigi or a minidress of Peach, Daisy or Rosalina depending on the gender. Both outfits are worn regardless of their favorite color. To unlock Outfit A, the player must win 100cc Special Cup or Play 1,650 races. For Outfit B, the player must unlock all 32 Expert Staff Ghost Data records in Time Trials. An Outfit C was also intended to be added to the game, but it was scrapped. Miis also appear as background characters in various racetracks, levels and courses.

They reappear in Mario Kart 7, where their unlocking criteria is to beat all grand prix cups regardless of 50cc, 100cc, 150cc. They also reappear in Mario Kart 8 and its Deluxe port where they are unlockable characters only in the Wii U version. They can also be able to wear amiibo suits consisting of Mario, Luigi, Peach, Yoshi, Donkey Kong, Link, Captain Falcon, Kirby, Samus, Fox, Toad, Bowser, Wario, Rosalina, Pikmin, Animal Crossing, Mega Man, Pac-Man, Sonic and Splatoon.

Male and female Miis performing during a industrial for Mario sports activities mix in North the usa. Miis are one of the nineteen playable participants in Mario sports activities mix. they're the all-rounder (All-round) kind, with Mario, Luigi, Yoshi and Ninja. regardless of their top and width, all of them receive the equal stats: three/five in every stat. The coloration in their clothes rely on their favored coloration and their apparel depends on their gender; male Miis get hold of a wearing outfit, at the same time as girl Miis acquire a skirt. Miis are also visible as spectators.

Their special potential could be very much like Mario's unique capability; they throw the object into a purpose which can be blocked via a struggle of the opponent. In dodgeball, the shot causes a damage radius that hits anybody in the radius. Miis acquire voices on this sport, a great somewhat rare in video games they seem playable in.

On a facet observe, Miis will by no means appear as warring parties in tournaments.

Real life Miis made an look in various classified ads to assist sell the game in North america. they may be sports activities anchors throughout these commercials under the names Mii-guel (later Michael) and Mii-chelle (later Lisa), showing gameplay footage to the gamers in diverse segments just like the terrific top three show, for example. additionally, they announce a press conference on the day of the game's launch, asking questions for Mario.

Miis appear as playable characters from the start. If the participant comes to a decision to begin a solo profile, the he or she then has to pick a Mii for his or her profile. The simplest characters the player can use in solo mode is their Miis. The player can unencumber clothes to get dressed up their Mii in the Dressing Room. Miis do not say anything to the opposite gamers. The shade of the Mii's save depends at the color of the Mii that is replaced through two of the Mii's warring parties talking to every other; however, if one or extra Miis have the equal coloration, they will be changed, relying upon order as chosen.

Miis also appear within the Nintendo 3DS identify Mario Tennis Open as playable characters. Miis may be given specific stats after they wear exceptional clothes or costumes and have special rackets. while a Mii is prepared with a full gear set based totally on a individual, enemy, or object, all stats could be boosted. Miis do no longer earn a star rank after triumphing all Mario Open cups. best the player can manipulate Miis; they can not be decided on as fighters or doubles partners.

Miis also are playable in Super Smash Bros. since 3DS/Wii U being known as Mii Fighters where they can have customizable outfits and headgear. Sakurai originally wanted to include them in Brawl, but decided against it since it seemed out of place for them to be fighting during Brawl. They also return in Ultimate where they can now be capable of using vocal voices. They also gain DLC outfits throughout 3DS/Wii U and Ultimate. 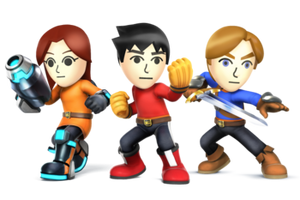 Miis in Super Smash Bros. for Nintendo 3DS and Wii U 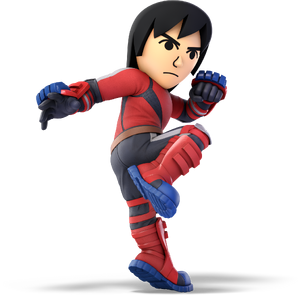